Imagine this: A brushfire, blistering and intense, breaks out on a dry, windy day and races up hills and down valleys, devouring trees, cars and houses. By the next morning the flames are gone, and the heavy clouds of black smoke have washed away to sea, leaving a clear view of charred trees and hundreds of seared foundations. Yet somehow, a few houses still stand, vivid against the backdrop of ruin.

That was the scene in October 1993 after a fire storm destroyed nearly 400 homes in Laguna Beach, California. The fires started several miles inland and swept to the sea at a brisk 2 mph to 4 mph, consuming increasingly thick vegetation along the way. Often, the course of the blaze forced the firefighters to make stands at what they considered to be the least defensible positions: the doorsteps of homes. Frequently, the flames boiled 50 ft. or 60 ft. into the air, and they reached temperatures of 2,000°F or greater. When the fire became that intense, the firefighters then were forced to abandon the structures, which in some instances burned to the ground in five minutes.

Now, more than a year and a half later, rebuilding efforts have begun to reclaim the blackened California hills and bare mountaintops where many houses once stood and where only a few houses remain.The most obvious question homeowners, builders, architects and code officials asked as they combed the rubble for clues was how did a precious few structures survive such an inferno while houses on all sides vanished in the fire? What they learned was a number of lessons that likely will work their way into local building codes and should help to reduce the damage of future fires.

Houses burn from inside out

At 400°F, curtains, wallpaper and bedding ignite. Wood studs spontaneously combust, or pyrolize, at about 450°F (steel studs melt and deform at only slightly higher temperatures). At that point, single-pane windows blow out from heat and ambient-pressure differences. Flame and heat rush in to meet interior combustion, thoroughly consuming structures. Whole houses can reach temperatures hot enough to weaken and spall concrete foundations. According to Laguna Beach Fire Chief Rich DuBerry, many if not most of the Laguna homes lost to fire burned from inside out.

Extreme heat — with or without direct flame — compromised the envelopes of houses and ignited material inside by entering houses through vents; poorly sealed doors or windows; and cracks in walls, subfloors or attics.

When such heat is present, destruction is a matter of time. The critical question is how much time is there? Any structures exposed to extreme temperatures and flame long enough will burn. For DuBerry Laguna’s lessons are clear: “Keeping the envelope sealed can buy precious time.”

Why did some survive in the midst of charred destruction?

The home of To Bui and Doris Bender was called a “miracle house” by the Los Angeles Times because of its dramatic survival in a neighborhood almost totally devastated by the fire. Why did this trilevel structure and a few others like it survive while neighbors’ homes on all sides, sometimes no more than 10 ft. or 15 ft. away, burned to the ground?

“It’s in the details,” Bui insists. He knows about such details. Originally from Vietnam, he lived and worked as a structural engineer in Germany for more than 10 years. There, the predominant building materials are concrete, stone, brick and steel. “In Germany, structures are designed to last hundreds of years,” he said. “I built my house to last.” He insists his Laguna home is not overbuilt. “It’s just that whatever the minimum codes called for, I went a little further.”

For maximum protection against fire, construct walls using type-X gypsum wallboard covered with a thick layer of stucco cement, a roof of fire-resistant shingles with bird stops at the eaves, little or no overhang and no soffit vents. 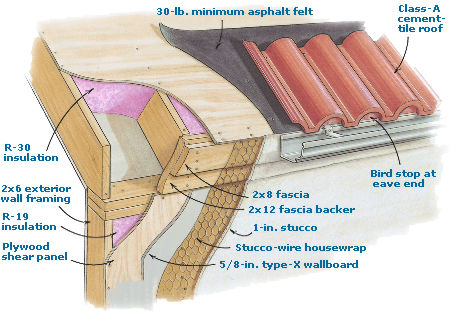 To prevent heat buildup, this house was constructed without eave overhangs, which also eliminates soffit vents. Cornices are built up with 2x12s and 2x8s and covered with 1-in. stucco. The class-A fire-retardant roof tiles are plugged with metal bird stop.

Where 1/2-in. wallboard is the minimal requirement on interior walls and ceilings, Bui opted for 5/8-in. wallboard and one-hour-rated exterior doors and jambs.

Roofs on the prevailing ranch-style or cottage-style homes in the area typically had 2-ft. or 3-ft. overhangs and undereave vents that trapped heat and flame and induced ignition. Bui eliminated eave overhangs altogether in his design and replaced them with double 2x fascia, which he then stuccoed over.

Ventilation, ordinarily found in soffits, on the ridges of roofs and in crawlspaces, was placed at the midpeak points of gable-end walls. Bui positioned horizontal, eyebrow-type roof vents on the class-A cement-tile roof at every peak, which allows the quick and efficient release of attic heat. That is a critical factor because attic insulation ignites at about 450°F. There are no crawlspace vents in Bui’s house. 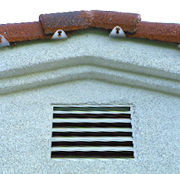 Minimal gable-end vents (above left) and dormer-type roof vents (above right) are adequate to ventilate the roof of this Pacific Coast house. Soffit vents are eliminated altogether. The reduced venting meets code for the area because of the greater concerns for fire safety. Behind the vents, 1/4-in. wire mesh was installed to cut the risk that cinders would be drawn into the attic space.

Bui covered wood-deck surfaces with successive layers of a fire-resistant polyurethane and a sand-coating product manufactured by Pacific Polymers Inc. (www.pacpoly.com; 714-898-0025) . This is a three-part, trowel-applied material that cures to about a 50-mil thickness and carries a Los Angeles Fire Department class-A fire rating. Bui installed scuppered drains before he applied the coating to allow drainage at several points through the subfloor. 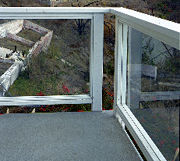 Wooden deck surfaces are troweled over with several layers of fire-resistant coating. Undersides of all decking are stuccoed over with a 1-in. layer of cement. The glassed-in deck rails are further protection against fire. 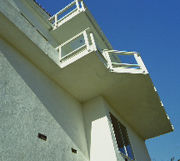 The owner of this Laguna Beach house stuccoed the undersides of all wooden deck surfaces to a maximum thickness of about 1 in., virtually eliminating any exposed wood.

Bui stuccoed the undersides of all exposed decking to the same thickness as exterior walls (photo above). The result is a house with virtually no exposed exterior wood.

Every house around Bui and Bender’s house burned. But when firefighters broke into the house to search for occupants, the place was a “cool” 100°F, Bender said.

On the opposite slope of this hillside Laguna Beach neighborhood is the home of John and Susan Parks, which also stood alone on a street of charred foundations after the fire. John Parks designed the house to withstand the heat of a brushfire. At first glance, the Parkses’ home looks like a typical California stucco-and-wood-frame house. A closer look reveals many of the same details that gave Bui’s house its edge against fire: double-pane windows on the exposed downslope side, a class-A fire-retardant roof, stuccoed undereaves and exposed deck areas, and vents sealed off under eaves. Parks built removable wooden stops that fit behind crawlspace vents.

“The place is sealed tight,” said Susan Parks. “At the doors, windows, wherever stucco meets wood — you see, it’s not just one thing, it’s every little extra thing put together that saved our home.”

Something else the Parkses now appreciate is the swath of ice plant that borders their house on three sides. Ice plant comprises a large group of fleshy ground covers that can be fire retardant if kept free of dead vegetation. On the downhill slope, the patch of ice plant extends 40 ft. or more. When the fire storm raged up the hill toward the house, flames encountered the ice plant and singed the first 10 ft. or so. The intense heat burst the watery pods into clouds of steam, which momentarily stalled the advance of the fire. Then the flames jumped the ice plant and the top of the house altogether. Rising five or six stories in the air, the fire showered the rooftop with cinders. The cement-tile roof survived, but the trees, foliage and houses around it did not.

Rich DuBerry is not the only official impressed by the houses that survived. In Laguna Beach, architects and building officials convened an emergency task force to discuss lessons that could be learned from the devastating fires. Headed by the Laguna Beach Building Department’s John Gustafson, the task force called attention to the hazards of building beside Southern California’s dry wildland areas and to what builders and homeowners can do to defend structures against future fires.

The report, which draws from examples of miracle houses and from field observations and analysis of fire experiences across the state, generally recommends that houses be built or retrofitted to withstand as much as one hour of fire conditions on the magnitude of the Laguna Beach blaze.

These task-force recommendations would apply to all homes that are designated to be in the high-hazard area of what is known as the “urban/wildland interface,” the place where brush, trees and grasslands grow to reach the edges of the neighborhoods.

The question for homeowners, builders and architects now is not whether to rebuild on the ashes of the old but how to rebuild. As rebuilding begins to take shape, it appears the lessons of Laguna are finding their way into the materials list of these reconstructions.

None of the task force’s recommendations has become part of the local code, although they’re moving in that direction, Gustafson said. However, virtually all homes being built in the high-hazard area are incorporating many or all of the fire-resistant features recommended by the task force.

John Underwood is a remodeling contractor in Los Alamitos, California. 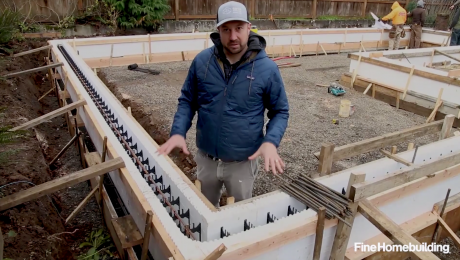 Benefits of Building with ICFs

Builder Josh Salinger explains how and why he's creating the foundation for this new energy-efficient home out of insulated concrete forms.