Putting the screening in a porch screen

I am building wood-frame screens for my porch and would like to know the best way to attach aluminum screening to those frames.

Rex Alexander, a cabinetmaker and custom woodworker in Brethren, Michigan, replies: After building the wooden frames for screened windows or doors, installing the screen is like the icing on the cake. A tightly stretched screen and rabbeted-in screen molding make anybody’s work look professional.

Some carpenters may mill all the frame stock and miter the corners of the frames, but I butt-joint the frames together and then do the milling. First, using either a dado blade on my table saw or a router with a rabbeting bit, I cut a rabbet on the inside edge of the frame 1/4 in. deep by 3/4 in. wide. Either way, I’m left with some waste in the inside corners to chisel out. Then I put in a carbide-tipped combination blade and cut a groove or a saw kerf 1/8 in. by 1/8 in. on the inside corner of the rabbet. A 1/8-in. chisel cleans the groove out to the corner. I break the inside edge of the groove slightly with 100-grit sandpaper to keep the screen from tearing when it’s pressed into the groove.

Next, I place the long dimension of the frames on top of two bar clamps on a flat, level surface and tension the clamps to put a slight bow in the frame. I cut an oversize piece of screen and lay it over the opening. Now I begin pressing the screen into the 1/8-in. groove at one end of the frame using a screening tool (a simple tool with a flat-edge wheel on one end and a grooved-edge wheel on the other, available at most hardware stores).

With the grooved side of the screening tool, I press a rubber-ribbed spline (also available at most hardware stores) into the groove over the screen. The hollow-rubber spline crushes as it is pushed into the groove to hold the screen in place. I then tack a piece of screen molding into the rabbet temporarily. 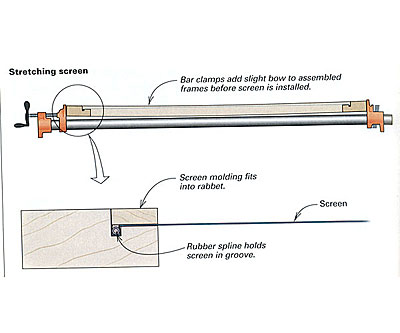