Backing ripped from 2x4s and a well-planned installation scheme take a lot of the guesswork out of this challenging job.

Synopsis: A finish carpenter describes the techniques and tools he uses to install crown molding quickly and accurately, and offers tips for dealing with out-of-square corners, wavy walls, and saggy ceilings.

The first time I installed crown molding, I couldn’t believe how easy it was. The builder I was working with knew exactly where every stud, truss chord and piece of blocking in the condo complex was located. The walls were flat, the corners square, and the ceiling level; there were no outside corners and no extra-long runs. I wouldn’t find out that I’d been lucky rather than smart until a year later when I tried to put up crown in an old Victorian town house, where nothing was plumb, level or square, and it seemed as if no framing existed beneath the plaster.

Angled between the ceiling and the wall, crown molding inhabits a three-dimensional space, making it one of the most demanding types of trim to install. When the wall turns a corner, crown makes two turns: One is along the ceiling plane, and one is along the walls, requiring compound cuts to join the pieces. Any discrepancy in either plane introduces a twist or bow that can alter the angles. Crown also is affected by shifting house movements acting on both planes, so it needs to be nailed securely to a stable surface to ensure that the joints don’t separate over time.

Every crown gets backing

Even when I’m following a first-rate framing crew, experience has taught me to check every corner with a framing square and to note any serious irregularities. (A gap between the square and the wall corner of even 1 ⁄8 in. can make it difficult to close the joint on a large piece of hardwood crown.) At the same time, I eyeball the wall and ceiling intersection, looking for any irregularities that might hinder the crown molding from making full contact. If I encounter a saggy ceiling or a wavy wall, I take the time to figure out if corrective measures are needed.

Even when everything is square and true, I still have to make arrangements for fastening the crown. Simply nailing into the studs and ceiling joists secures the crown only along the top and bottom edges. Inevitably, the edge splits, or the small finish nails don’t find good purchase and give out after a few years of seasonal movement. I avoid such aggravations by installing a backer of rough framing lumber that allows me to nail the crown wherever I want.

For modest-size crown, my typical backer is a straight 2×4 ripped at a bevel to match the spring angle of the crown. Rather than cut the backer to fill the space behind the crown completely, I lay it out and cut it so that the beveled face is about 1 ⁄4 in. shy of the back of the crown. This gap allows enough wiggle room to fine-tune the joints if needed. The crown still firmly contacts the ceiling and wall at the edges, but its meaty belly is pinned with a stout finish nail.

For more photos and details on installing crown molding, click the View PDF button below. 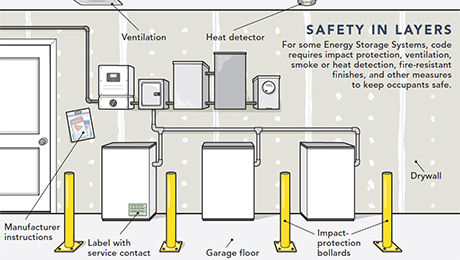 Storing Your Own Electricity

With an increase in the popularity of electric vehicles and solar panels, new requirements for safely housing systems to store excess energy have cropped up in the latest building codes.