Small enough to carry with one hand, but big enough for job-site work.

Synopsis: Tablesaw manufacturers have found ways to design their tools for maximum portability, and in this article, associate editor Patrick McCombe puts two of them to the test: the Bosch GTS1031 and the DeWalt 7490X. He identifies the five features that matter most in an ultra-portable tablesaw—power, riving knives, fence design, rip capacity, and portability—and describes how these two tools stack up. In the end, he leans toward the DeWalt because of its rip fence, but acknowledges that if portability were his primary concern, he’d choose the Bosch.

My introduction to job-site tablesaws took place more than 20 years ago when I was issued an 8 1⁄4-in. Makita by my employer. It was a good saw, and at 40 lb., it was easy to carry. Then in subsequent years, the job-site tablesaws I used seemed to get bigger and bigger.

Most recently, I’ve been using a Bosch 4000 with Bosch’s Gravity Rise folding stand. It, too, has been a good saw, but when mated to its wheeled stand, it weighs 113 lb. and fills the bed of a compact pickup. Given the saw’s bulk and my aging back, I was intrigued when Bosch introduced a smaller tablesaw, model GTS1031, with an 18-in. rip capacity. In the company’s advertising, an average-size carpenter is shown carrying the saw with one hand while climbing a staircase. Even without the stand, there’s no way I could carry my saw with one hand.

Both saws come almost fully assembled, and their out-of-the-box accuracy was similar. I spent about half an hour on each saw making the blade parallel to the miter slot and setting the stop for 45° bevels. The process for truing the blade is the same for both saws. It involves loosening four machine screws that hold the trunnion to the table and then aligning the blade to the miter slot with a combination square.

Each saw has a well-designed, three-part modular blade guard that includes a riving knife, anti-kickback pawls, and a blade cover. The blade cover and anti-kickback pawls are removable, and they can be stored on the saw’s housing. The riving knives, which are the thickness of thin-kerf blades, rise and tilt to match the blade height and bevel. The DeWalt includes two riving knives: one that accepts the blade cover, and a finlike one for use without the cover. Both DeWalt knives can be swapped or removed altogether by pulling a cable-connected handle that is mounted under the saw table. This setup is easier to use than Bosch’s, in which a small lever secures the riving knife. Although the height of Bosch’s knife is adjustable, the knife itself can’t be removed readily.

Both saws have blades that are fully enclosed under the table. When connected to a good shop vacuum via their 2½-in. dust ports, they collect about 90% of the dust — a very reasonable amount. 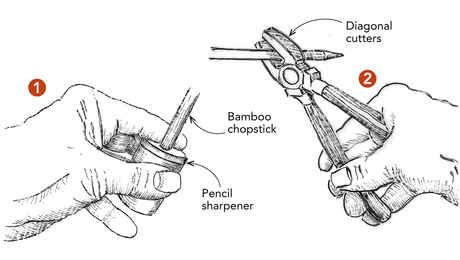