In an industry where R&D budgets seem largely focused on battery-operated tools, it’s easy to regard Skilsaw’s 13-amp corded reciprocating saw (SPT44A-00) as an anachronism. But look beyond the cord and there’s plenty to like.

For starters, its $100 price tag makes it the least expensive 13-amp recip saw I’ve ever seen—closer in price to less capable cousins. On price alone, it’s in the range of what I might pejoratively call a “homeowner tool,” but it performs beyond what its price tag suggests.

The most touted feature of this saw is its “Buzzkill” vibration-reduction technology, which noticeably reduces the amount of hand-deadening vibration. I can’t say its vibration performance is as dramatic as Skilsaw claims, but head to head against a similar saw, it was perceptibly less jarring.

The speed is trigger-controlled, ranging from 0 to 2800 strokes per minute. With a 2800-spm top-end, it’s not going to win any hot-saw competitions, but it’s no slouch either, matching the rate of a 15-amp Milwaukee Super Sawzall (though with a stroke that’s 1⁄8 in. shorter). The plastic housing has a sturdy feel, and an insulated rubber boot on the front of the tool makes for a good grip. As we all expect on these tools, it’s equipped with a quick release for rapid blade changes, but it doesn’t have a rafter hook or an adjustable shoe. Still, for a user who doesn’t need or want those features, the Skilsaw recip saw may be the best option out there. 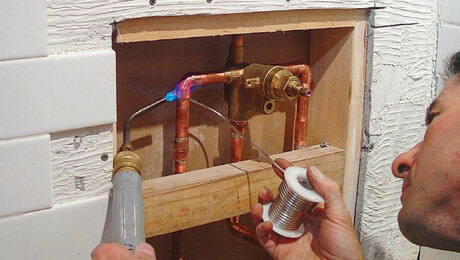 No Water From a New Mixing Valve

Avoid this common but easily solved mistake when testing a newly installed mixing valve in a tub or shower.