Jimmy Crisp attests to the staying power of this prevalent 19th-century Neoclassical style.

“The style was fundamentally an expression of America’s triumphant sense that our newly formed nation was the spiritual descendant of Greece, the birthplace of democracy.”—Bruce J. Wentworth, AIA

Even if you aren’t well-aquainted with the Greek Revival style of architecture, chances are you have seen your share of temple-esque facades on churches, banks, town halls, and houses. According to historian Virginia Savage McAlester, the style began and ended with public buildings in Philadelphia—the First Bank of the United States premier among them. “An important and enduring legacy of the Greek Revival to American domestic architecture is the front-gabled house,” writes McAlester. The style was popular from 1825 through 1860, and vestiges of its features are found across the country today in old and new homes alike.

Meant to echo ancient temples, Greek Revival-style homes are often painted white in reference to marble. Key architectural elements include: low-pitched pedimented gables, heavy cornices, and simple friezes. Cornice lines are commonly embellished with a wide band of trim, a nod to the classical Greek entablature. Columns in the Greek orders (Doric, Ionic, or Corinthian)—or, alternatively, square pillars—are also common among Greek Revival houses, as are porches. Entry doors are often recessed and surrounded by narrow sidelights and a transom; windows are generally double-hung, six-over-six, three-part assemblages. The more prominent windows might include decorative surrounds, and small rectangular windows are often set into the frieze beneath the cornice—a substitute for the common dormer. 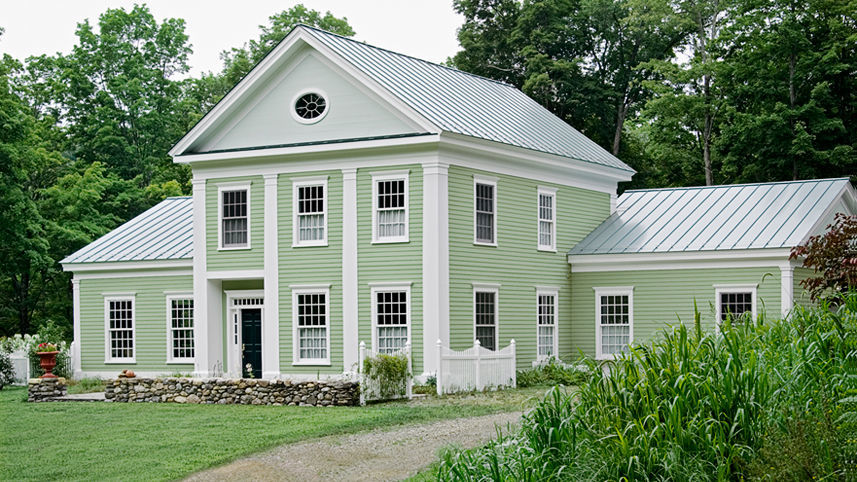 The style can be expressed in the most modest (or ornate) of terms. McAlester identifies six subtypes, which are identified by a porch’s presence/absence and style, as well as the roof configurations. They are: entry porch less than full height, or absent; full-height entry porch; full-facade porch; front-gabled roof; gable front and wing; and townhouse. The style varies by region, too. In warm southern climates, plantation-style verandas, piazzas, and pedimented porticoes are popular, while in northern regions we see more austere farmhouses with pedimented gables, understated pilasters, and offset entry doors. 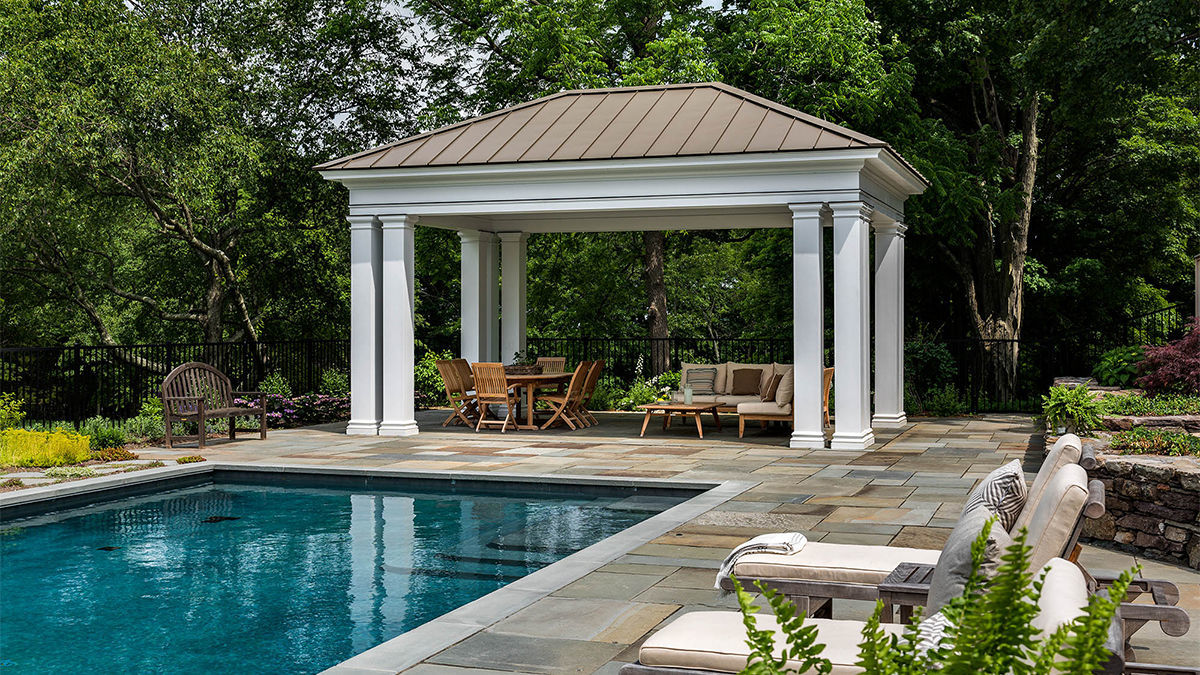 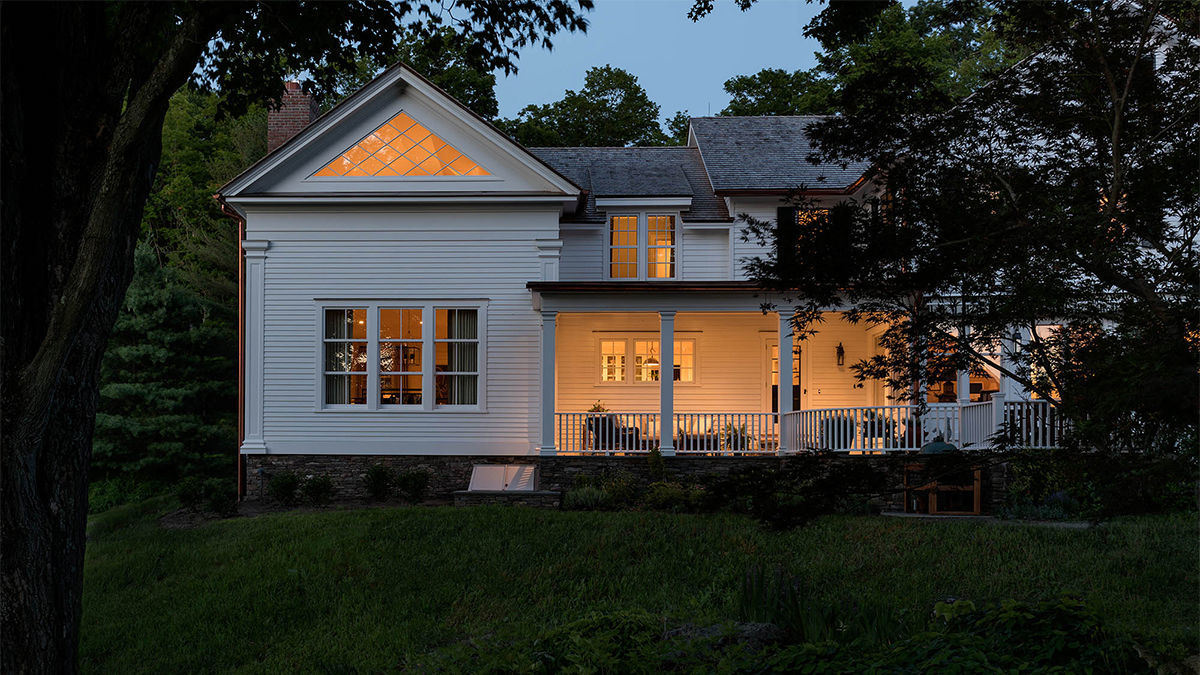 Jimmy Crisp, principal of Crisp Architects, is especially fond of the style. Located in upstate New York—a place heavily dotted with historical Greek Revival houses—he regularly designs homes with distinct Greek Revival roots. “We love to work in this extraordinary language, no matter how large or small the project,” he says, adding that classical proportions and details can be applied to many types of structures, including annex buildings such as the pool pavilion pictured here. He is also apt to add onto an existing home using the Greek Revival vocabulary. “That [portion of the building] becomes a little jewel box unto itself,” he muses. 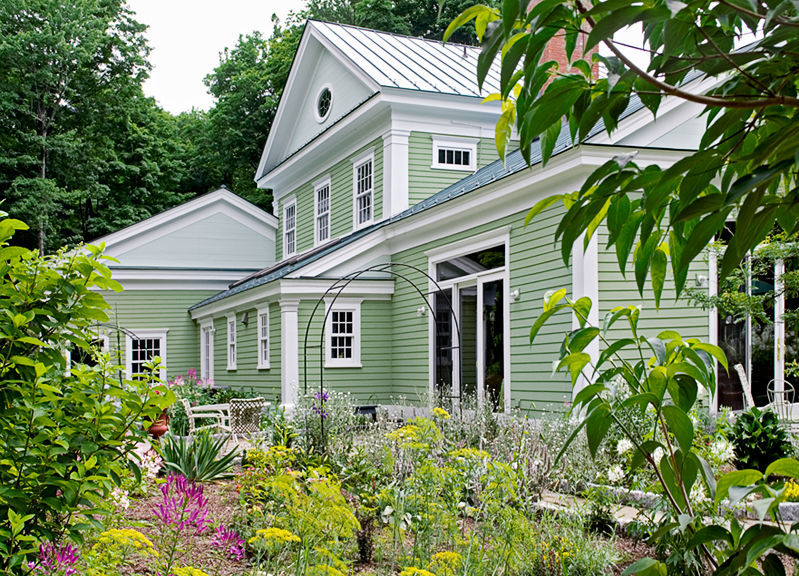 Crisp allows for flexibility in his work. Some of his projects are more true to the Neoclassical style than others, but he contends that variations are equally compelling. “There are many Greek Revival buildings in my area that were built by carpenter-architects,” he says, “and they took liberties such as modifying the proportions. Many of our projects are designed in that kind of nonrigid carpenter-architect style.” Such modifications might include the width of soffits or fascia boards—perhaps in response to the size the building. Then again, he says, “Sometimes a homeowner wants a house in the spirit of the Greek Revival style but they are building on a budget, so we scale back on some of the details. We might use off-the-shelf crowns or bed molds that are less expensive and easier to build.”

Though simplified, interior features in this home include Greek Revival detailing on the base molding and door/window trim, which Crisp notes would traditionally have been more built up. “But it’s rare we get a request for a true reproduction of Greek Revival detailing because it’s very expensive,” he says, adding that most people prefer the look of a simplified interpretation of the classical style. 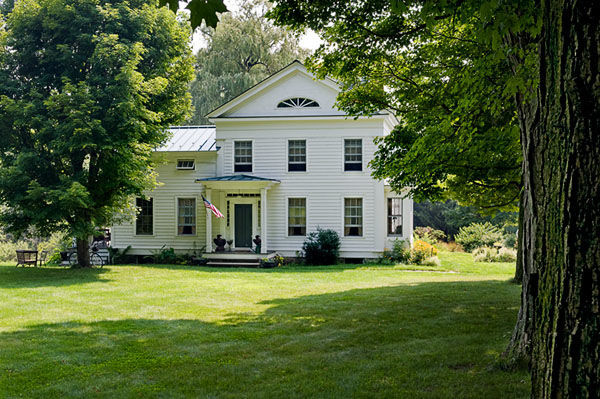 It could be argued it’s this flexible attitude toward the Greek Revival style that has contributed to its staying power.

Photos by Rob Karosis, except where noted

View All
View All Other Home Styles Articles