The 2019 FHB House is a modern take on a traditional neighborhood home in a New Urbanist planned community outside of Louisville, Kentucky. The aesthetic is a nod to house styles found through historic southern cites but the choice of building materials and amenities is distinctly modern.

2019 FHB House Video: Traditional Design and Modern Elements on the Interior and Exterior

The completed home is a traditional southern house built with high-performance materials and accented with modern design touches.

Built in the New Urbanist neighborhood of Norton Commons outside Louisville, Kentucky, the facade of the FHB House is influenced by historic homes in southern cities. The New Orleans influence is seen in the upper and lower porches, the tall front windows flanked by operable shutters, and the gas light over the front door.

Jason Black of Artisan Signature Homes and Gretchen Black of Greyhouse Design punctuated the traditional exterior with modern touches where they could, as in the outdoor living space at the rear of the house. Rather than maximizing the home’s footprint, Jason created a small backyard by detaching the alley-loaded garage to create a sheltered courtyard that serves as both entertainment space and private getaway in a very densely developed neighborhood.

The garage footprint is extra deep to include a bar room on the courtyard side. It has a serving and eating area as well as prep and storage space, and a short glass-panel garage door closes the bar area when not in use. The courtyard is constructed of poured concrete pads and turf, a cheaper alternative that creates the look of a limestone-paver patio. A covered walkway provides shelter while moving between the garage and mudroom.

The first floor measures about 1200 sq. ft., but packs both utility and aesthetic punch. The floor plan recognizes that the kitchen is the hub of the house and puts it kitchen at the center of the open plan. The large kitchen island provides a handy prep station with a deep sink, plenty of counter space, and a pullout trash drawer with an integrated cutting board and knife block that allows scraps to be scraped directly into the garbage.

The pale gray cabinets and white quartz counters are accented by the brass banding that substitutes for trim and edgebanding throughout much of the kitchen. The brass is carried through to the range backsplash, where white porcelain tile sets off the brass bars that replace grout lines.

The kitchen is open to the breakfast nook and the family room. The family room built-in has a traditional look with storage and display space while functionally hiding the ductwork that runs to the second floor. The fireplace on the other side of the room has a more modern vibe with a mitered mantel and shiplap installed in a chevron pattern.

A butler’s pantry buffers the flex room from the kitchen and more public areas while creating lots of storage space. The flex room at the front of the house can function as a dining room, sitting room, or a home office. It enjoys southern light through the tall windows looking over the front porch. The room is a single color from baseboard to ceiling, which accentuates the shadow lines of the moldings.

Custom metal sidelights and a transom frame the large opening into the hallway to reduce the scale of space a bit while keeping the open feeling. Glass was left out of the framed lights to reduce expenses and make it easier to keep clean. The metalwork continues on the stair railings in the custom balusters that were fabricated on site.

For indoor parties and TV-watching, the basement has an entertainment room with a bar. The paneled bar and floating shelves are ready to display local Kentucky bourbons while refrigerator drawers, a dishwasher and sink, and storage mean the homeowners can entertain without running up and down stairs.

During the framing stage, a subwoofer was built into the wall to reduce electronics clutter and HVAC ducts were run around the perimeter of the room so the chases would create a tray ceiling. The TV wall has a brick veneer that’s been limewashed for a muted aged appearance and to add some texture.

On the second floor, the master suite receives all of the attention. The bedroom itself is just large enough to accommodate a king-size bed with night stands on either side, but the room has its own private porch. The walk-in closet with dressing area is separated from the sleeping area.

A pair of swinging doors open the room to the large master bath. The toilet area is set off behind a pocket door for privacy, while the his-and-hers vanities and showers and the bathtub dominate the space. The unlacquered brass DVX fixtures and marble-like porcelain tile make a statement. The division of spaces in the bathroom and layout of the master suite offer space for two to begin and end their day and also retreat from the hubbub of other areas of the house.

With the facade of the Fine Homebuilding House, Jason and Gretchen have embraced the charm and neighborliness of New Urbanism. But they’ve also updated a traditional southern house with modern design touches and high-performance building materials. The tight building envelope and efficient HVAC system ensure savings and comfort. And the highly designed finishes are accompanied by an emphasis on durability and craftsmanship.

The result is a house that feels larger than its 1200-sq.-ft. footprint, with contemplative and gathering spaces that work in unison.

Find out more about the 2019 Fine Homebuilding House:

What is a New Urbanism Development? – Walkable neighborhoods and more interconnected communities are why homeowners, developers, and municipalities all find this this unique design philosophy attractive.

A Courtyard Room Creates Privacy on a Narrow Lot – A well-designed courtyard connects the outdoors to the first floor, a big plus in a home with neighbors so close by.

Air-Sealing and Insulating – Planning ahead and focusing on the details are the keys to creating a tight envelope with Zip System sheathing and spray foam. 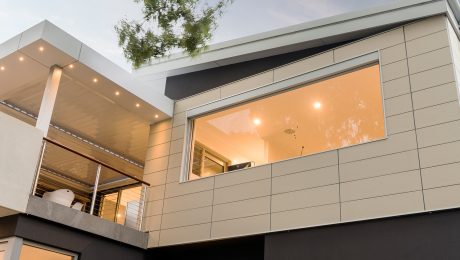