How to Daylight a Bathroom

When I was in middle school, my family moved into our first house. It was a beautiful, modern, one-story home in Northern California built in the late 1950s and designed by a local architect who was clearly interested in daylight and solar design. Like many modernist houses of that era, the bathrooms were small, efficient “machines for living” and were also all interior rooms. One memorable and unusual feature of these bathrooms was the low, flat ceiling, whose surface was an off-white, semi-translucent plasticlike sheeting. The sheeting was set in a lay-in frame and hung below roof-mounted skylights. The effect was to bring diffused daylight into the space during the day without the heat gain that was the mainstay of our summers. Many years later, I still find myself thinking about those bathrooms.

As an architect, one of my goals when designing a bathroom is to introduce daylight into the space so that it is balanced within the room and so that the contrast in illumination from one area to another is minimal. Put another way, I try to control the shadows.

1. Daylighting from the side

Daylight brought in from the side of a bathroom is mostly accomplished through windows, but it can be done with glazed doors as well. Ideally, the room will have two outside walls so that the light can be brought in from two different orientations. This is not always possible, and in these situations, more care has to be taken about the placement of the openings, the use of adjacent surfaces, and the layout of the bathroom itself.

A key advantage of bringing daylight in from the side is that it’s easier to adjust the window or door location so that the daylighting illuminates the space where it is most needed—in the mid- to upper-body range. However, daylighting a bathroom from the side works well only in small bathrooms where the distance between the window or door and the opposite wall is minimal. In large bathrooms, the light levels fall off quickly, and the space is more apt to be underlit.

This bathroom, an addition and remodel in Palo Alto, Calif., sits adjacent to a semiprivate second-floor deck and is a good example of daylighting from the side. 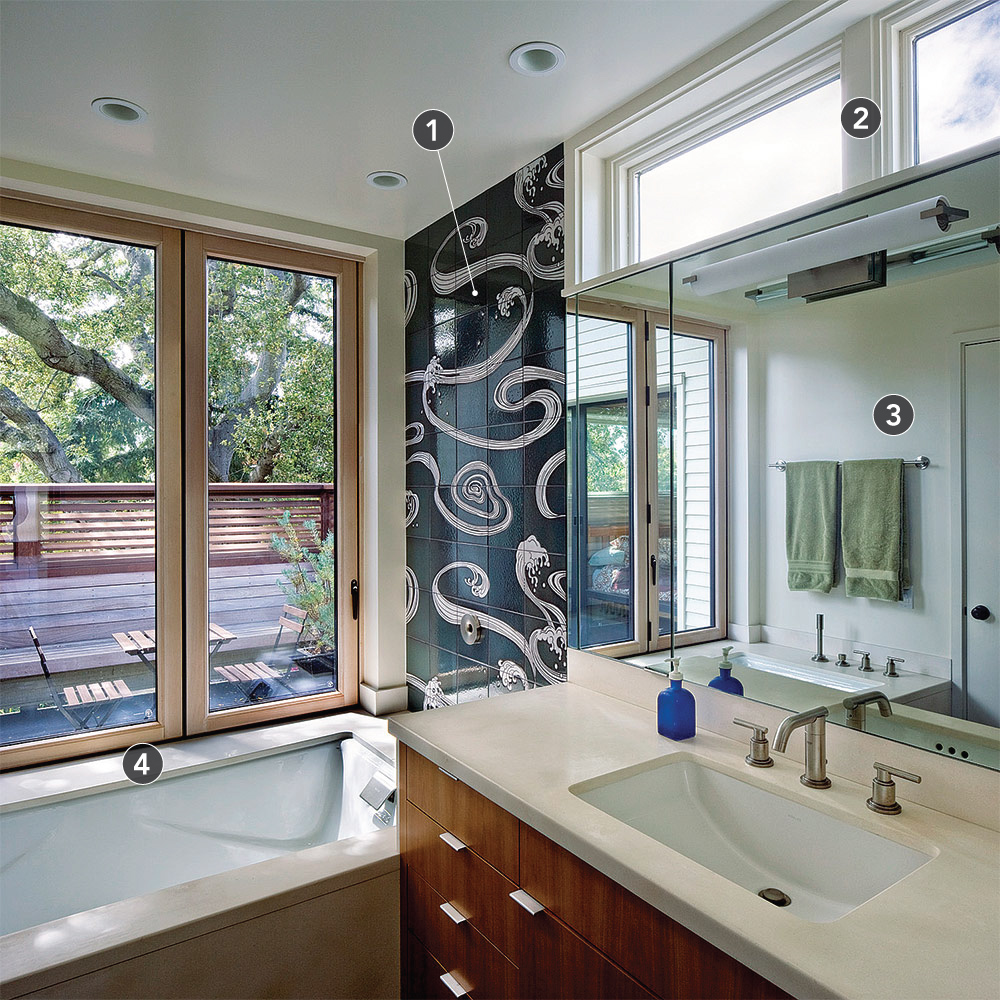 1. Dark materials, such as this tiled mural, have a lower reflective-light output and modulate the light level, which reduces eyestrain in what could be an overly bright bath.

2. Fixed clerestory windows above the vanity wash with light the adjacent white ceiling, which is used as a reflective surface to direct light down into the bath.

3. Mirrors work much like interior windows. For bathrooms with low levels of natural light or for cases when access to daylight is limited to only one wall, a mirror can be used to direct light into other parts of the bathroom.

4. The walls, ceiling, and tub deck are all examples of adjacent surfaces used to reflect light. All the window openings terminate close to these surfaces.

2. Daylighting from the top

On occasion, the ceiling can be the only surface available for introducing daylight into a bathroom. When a bathroom is landlocked in a layout and the ceiling sits just below the roof, I always add a skylight. A skylight or multiple skylights can be used to balance the daylight in the space below.

Although it’s difficult to daylight a bathroom fully with a single skylight, a skylight with a well-placed shaft can concentrate light in the upper level of the space. The falloff in light intensity will be downward and not as noticeable. However, a drawback to skylights is that they are sometimes difficult to orient correctly to the path of the sun.

In this example—a 50-sq.-ft. bathroom located on the second floor of a house in Atherton, Calif.—two venting skylights were placed at each end of the room to daylight the space fully, to provide small views out, and to offer passive ventilation. 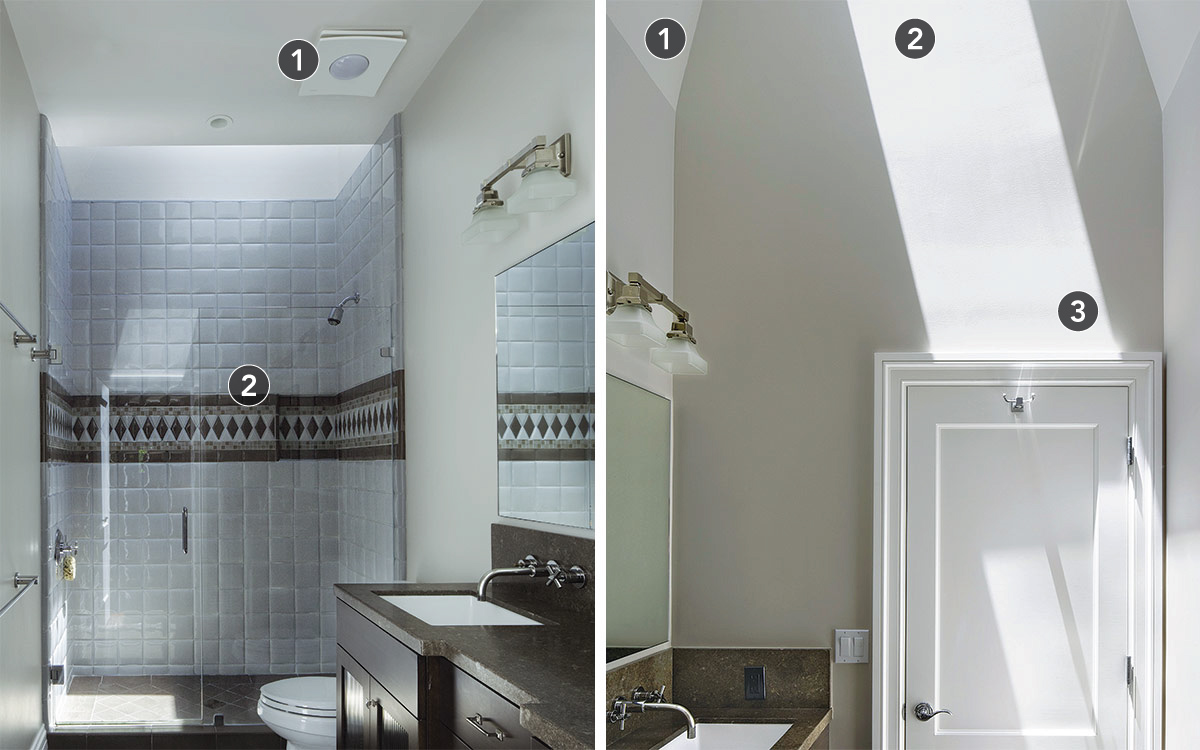 3. Daylighting from the side and the top

Bathrooms that have only one exterior wall and window can be a challenge to daylight properly. However, when the bathroom’s ceiling is set just below the home’s roofline—in a second-story bathroom, for example—I add a skylight to help balance the daylight.

It’s much easier to balance the daylight in a bathroom when light enters the space from both the side and the top. When the skylight is operable, there also is a great opportunity for passive ventilation.

In this 50-sq.-ft. bathroom in a historic house in Palo Alto, Calif., daylight enters from two directions—through large windows and a large skylight—which provide a high, even level of natural illumination without any high-contrast shadows. 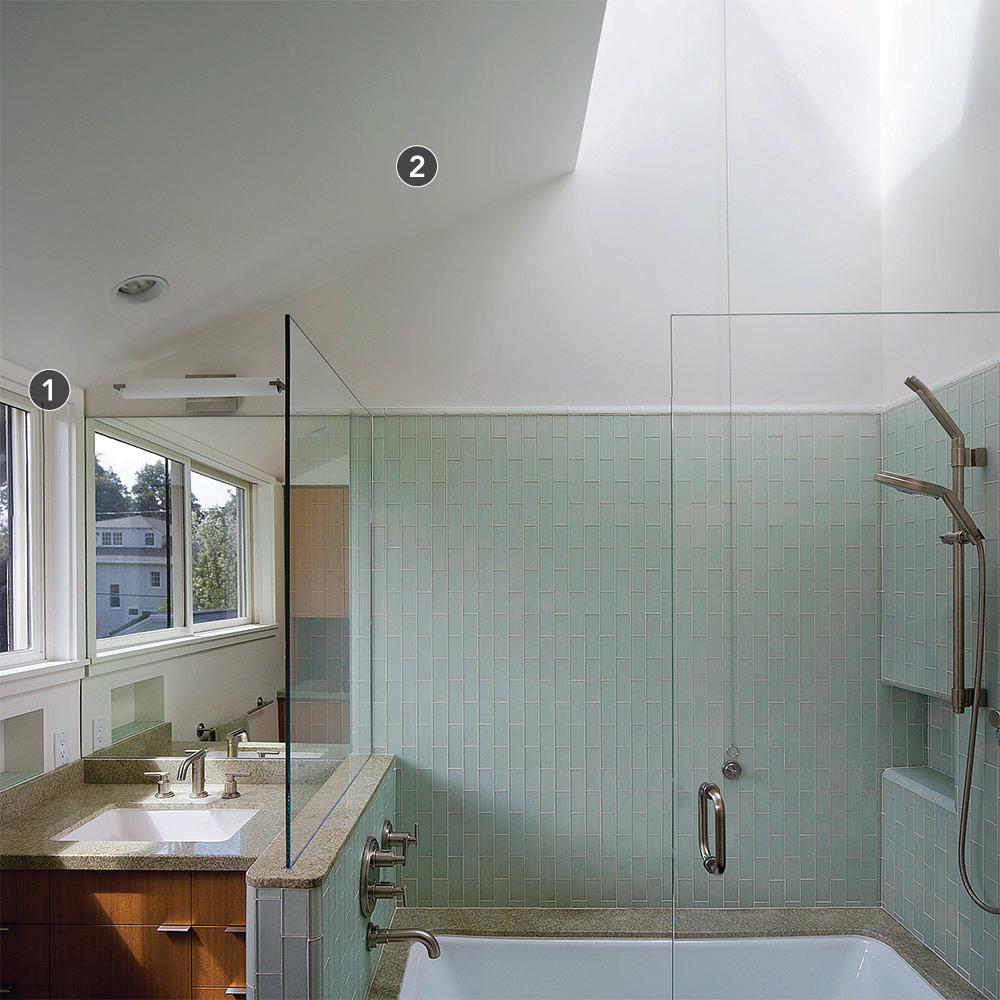 1. Daylight from the high window head illuminates the ceiling, which reflects light back down to the vanity and shower area.

2. The angled ceiling plane receives reflected light from the opposing shower wall and bounces light into other areas of the bathroom. Even though this ceiling plane is in shadow, it’s evenly lit, so contrast within the space is minimal. 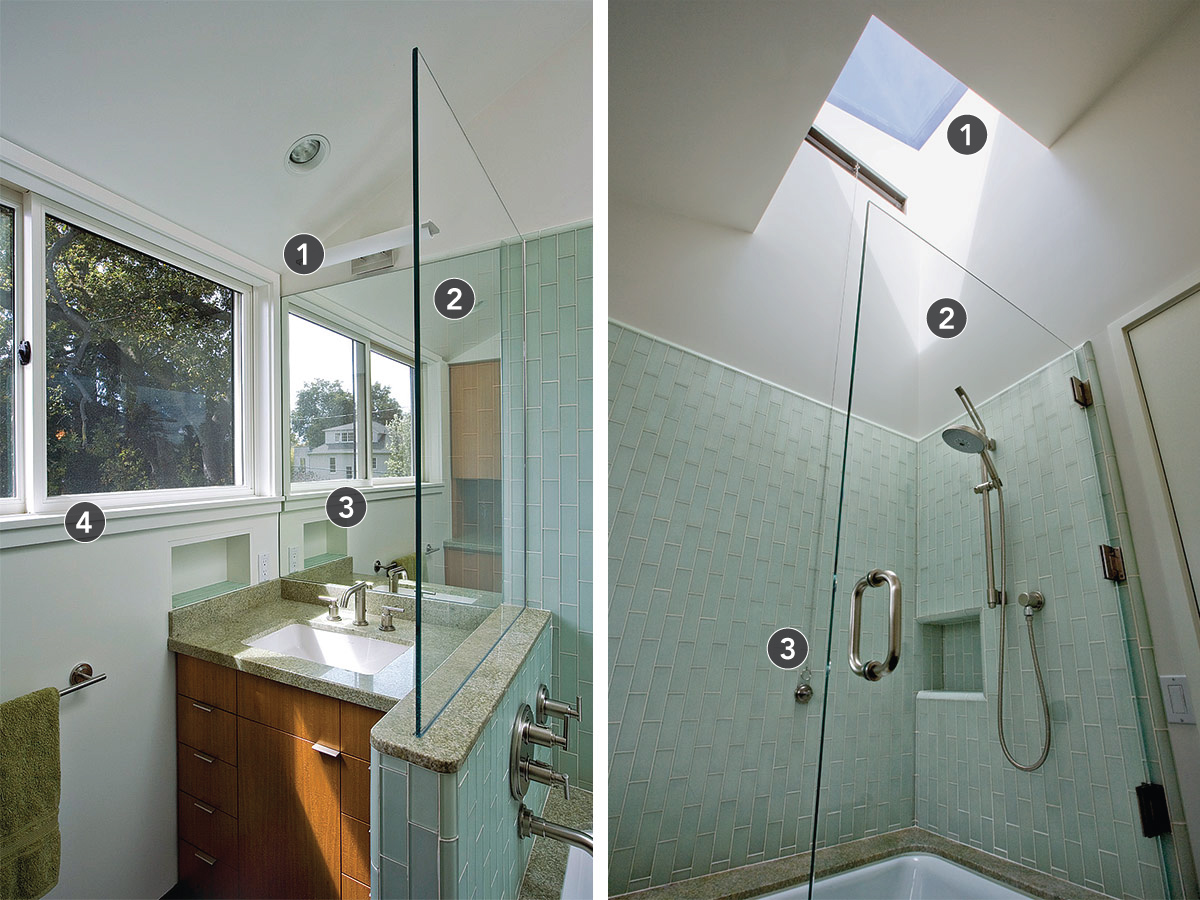 Cathy Schwabe, AIA, is an architect in Oakland, Calif.

Photos by David Wakely, except where noted.