The trick is to assemble the mitered casings with biscuits and glue, clamp them together, and install them as a complete unit.

Synopsis: An experienced builder shares his time-tested process for installing miter joints — a process which saves time, requires less skill, and yields better results. In the authors case, it also put an end to his habit of falling off of mud-buckets used as improvised step ladders. This article highlights a logical and methodical approach for cutting miter joints and casing.

Ten years ago, my approach to installing casing was fairly traditional: Measure, cut, test the fit, walk back to the saw, trim the cut. Then one day, I climbed onto a joint-compound bucket to test the top piece of trim on a doorway a few feet upstream of a short flight of stairs. Microseconds later, I felt my feet describing an arc about my head and proceeded down the stairs like an otter wearing tennis shoes. It’s amazing how such a short trip can get so rocky, so quickly; it made me realize my methods (and stepladder) needed an upgrade.

A few months later, I happened to work with James Chambers, a talented trim and cabinet builder from Old Saybrook, Conn. He cut, biscuited, and clamped his casings together on the floor, then installed them as a complete unit. His miter joints were perfect, and the installation nearly flawless. By the next job, I had abandoned the mud-bucket shuffle and converted to the preassembly method of casing, which has improved work quality, reduced both the level of skill and hours required for the job, and extended the useful lifetime of my lower back. Here’s some of what I’ve learned over the years, wrestling with and pinning miles of casing.

Get set up, then cut the miters

When the material arrives, my crew and I orient it in the cutting room so that a 16-footer does not have to be spun end for end in a 14-ft.-wide room. I like to cut the miters before cutting the stock to exact length and prefer to have the outside edge of the casing against the fence when cutting them; this placement eliminates any tearout on the inside edge of the miters.

I always cut two sample 45° miters after setting up the saw station to ensure that the result is square and that all the details line up. After the necessary adjustments, someone starts cutting the miters, either lefts or rights for the trim on the sides of the doors, or door legs as we call them. This way, I don’t have to change the saw angle repeatedly. By placing a strip of blue painter’s tape on the miter saw’s extension wings as a reference, I can cut the door miters quickly an inch or so long and cut the square ends later. Once a bunch have been cut, they can be slotted for biscuits at any time. In addition, if the cutoff from one door leg is not long enough for another leg, it may be long enough for a top (or head), which can be cut after the legs are finished.

To mate casing miters together so that they stay together longer than the next heating or cooling season, I assemble casings on the workbench with biscuits and glue, then clamp them together before installing them as a complete unit. I use special miter clamps that I designed and manufacture (Clam Clamps; www.miter clamp.com; 800-966-4837). The Hartford Clamp Co. (860-528-1708) makes a similar clamp. I don’t believe that spring clamps exert enough pressure to allow you to move the assembly while it’s still drying; I’ve avoided using a pneumatic nailer to pin the biscuited joint for the same reason.

Although you can hold each piece face up on the table while slotting, I find it easier to slot from the back of the casing, especially if there’s limited space and a large pile of casing. Two layers of thin plastic or laminate, cut slightly narrower than the casing at 45° and glued back to back, span the relief cut in the back of the casing and form a platform that reduces the chance that the biscuit joiner’s base will rock, misaligning the slots. I align the outside edge of the biscuit-joiner fence with the inside of the miter and plunge. Putting the biscuit close to the inside edge of the joint helps to prevent the inside corners from opening. 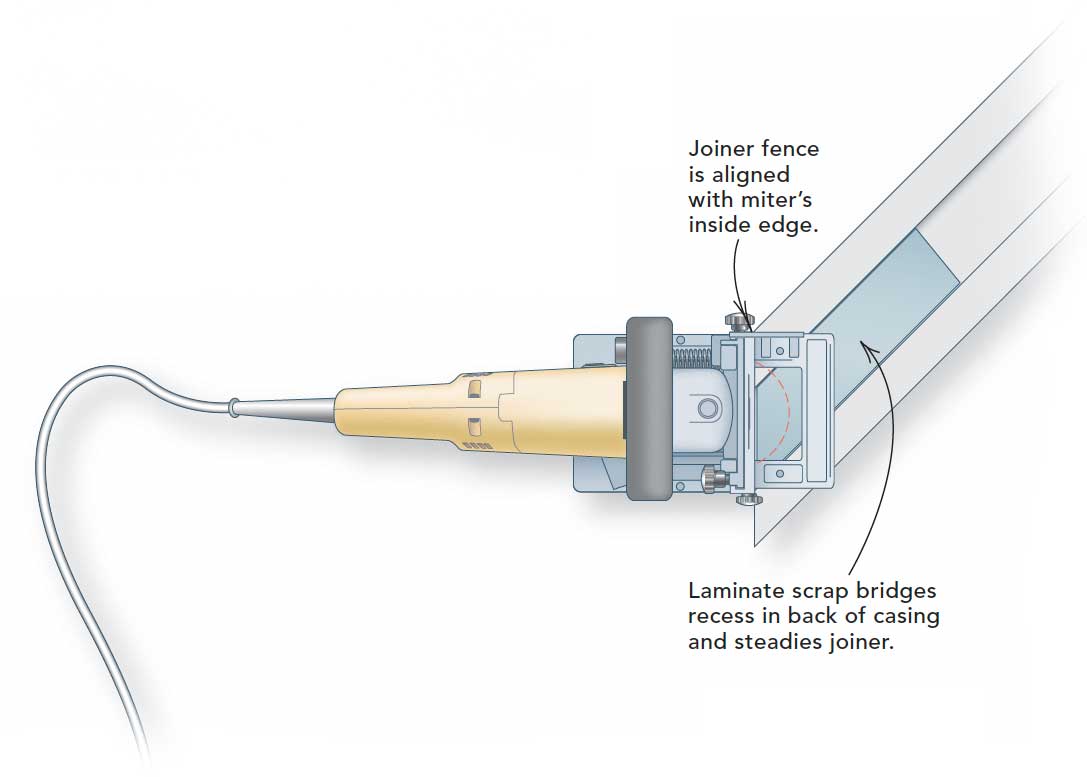 Glue up is messy, especially when I’m doing with laminate for a glue-up table, though any sheet goods (such as melamine) work fine. (Dried yellow glue easily pops off with a taping knife.) The table’s width can handle most door and window casings. Wider assemblies, such as double closets, can be clamped together on the floor in front of their destinations and nailed to the jambs immediately with the clamps still attached.

I cut a bunch of 4-in. shims tapered from zero to 1⁄8 in.; butter the mitered edges, slots, and biscuits; shove together the joints; and align the details. I use a lot of glue and try to avoid sliding the miters against each other because it tends to remove too much glue and could result in a starved joint. I use the thin shims to adjust the alignment of the miter faces when a head or leg has a slight twist or when the glue-up table itself is torqued. When the miter is assembled, I hold it with one hand, slide a clamp into position with the other, and clamp it home. Between the glue, biscuits, and clamps, the joints set up fast; poplar casings at 7% moisture content in an ambient temperature above 70°F can be unclamped safely in 5 or 10 minutes, as long as you’re careful. Under the business end of the table, where it almost never is knocked over, I keep an old pot half-filled with water heated on a cheap electric hot plate and bristling with toothbrushes. A warm, wet toothbrush cleans glue squeeze-out quickly; a quick blast of compressed air dries any residual water. I have been using this process on both paint- and stain-grade work for years without problems for the finishers, though for stain-grade or clear finish, I repeat the process with a sponge and clean water after the first blast of air.

Remove any obstacles and install

Once the miters are assembled, the casings are ready to be nailed onto their respective door jambs. If the drywall is proud of the jamb, I cut away the drywall from the doorway to make sure that the casing sits tight against the jamb; I typically leave 3⁄4 in. under the casing.

I run a thin bead of glue along the outside edge of the jambs before shooting the casings on; it’s small enough that I rarely get squeezeout at the reveal. This glue adds enormous strength and rigidity to the jambs. Although this effect is diminished tremendously with preprimed parts, I do it nonetheless. The outside edges of the casings can be nailed off later when the baseboards are installed.

When pressed by either scheduling or lack of space, I clamp and lean four casing units against the wall. I then remove the first set of clamps, clamp and lean another set, remove the next set of clamps in order, and so on, until I have as many as 16 sets complete. Then I install those with the clamps still attached, nailing the casing into the jamb only. When finished with those four, I come back and repeat the process, starting with the first set clamped. Then I take the clamps off the first batch installed and start all over again.

Jim Chestnut has more than 30 years’ experience as a carpenter. He lives near Bangor, Maine. Photos by Randy O’Rourke, except where noted. Clamp photos: Scott Phillips