What Makes A Pretty Good House?

Synopsis: The Pretty Good House (PGH) building standard, conceived in 2011, involves using good design and proven building science to reach a practical level of performance. Since the PGH idea originated, we have gained a deeper understanding of the effect of carbon emissions on climate change. In this article, building science consultant Michael Maines describes the features of a PGH, and uses two concept-house examples to show how a PGH can incorporate low-carbon strategies.

Have you heard about the building standard that’s completely voluntary and has no set requirements? It’s called the Pretty Good House (PGH), and the idea is to use good design and proven building science to reach a practical level of performance in a durable, lovable, net zero energy-ready structure. The PGH was conceived in 2011 at a building science discussion group hosted by Performance Building Supply in Portland, Maine. Dan Kolbert, a builder in Portland and moderator of the discussion group, had grown frustrated with other performance-rating programs for being too restrictive, too resource-intensive, and too hard to convince clients to invest in. We brainstormed about what practical level of performance—and other features—a PGH would include. I wrote a blog post summarizing our discussion on GreenBuildingAdvisor.com (GBA), and the idea took on a life of its own. Recently, we updated the PGH concept to address the urgency of the climate crisis. 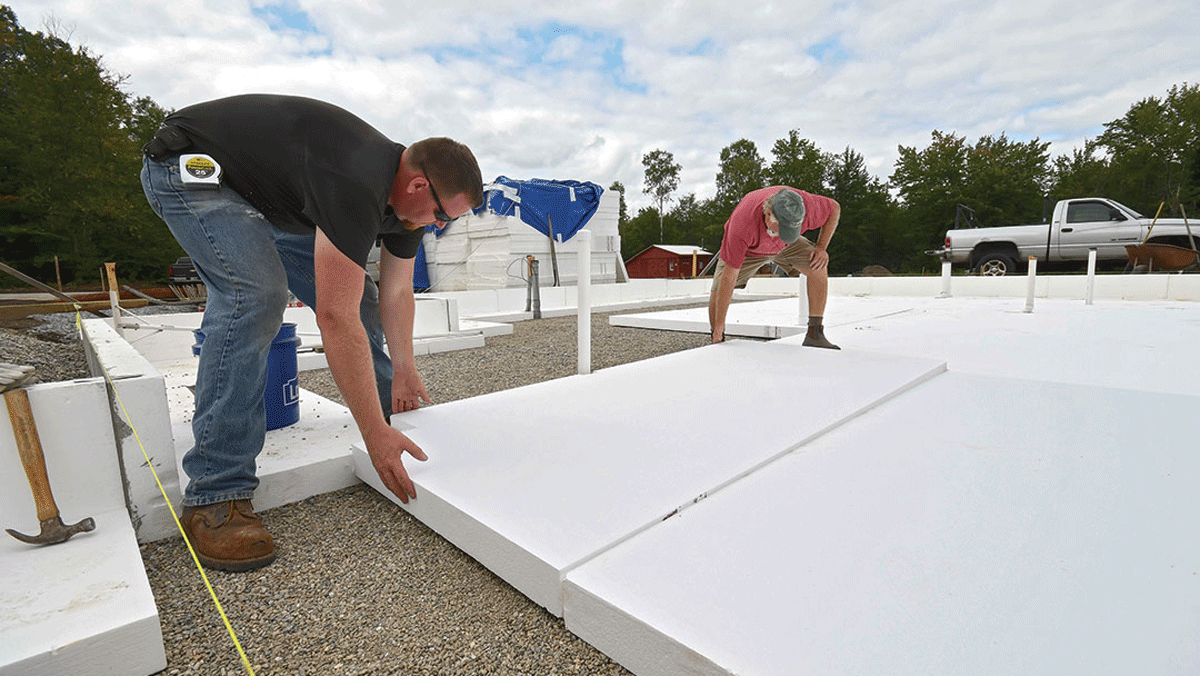 The release of the United Nations’s 2018 climate-change report highlighted the need to considerably reduce global warming emissions and also made evident the building sector’s significant contribution to the problem. Over the last eight years, many of us in the discussion group have developed a deeper understanding of high-performance building, so we decided to review our initial list of PGH attributes. Surprisingly, little had changed—a testament to the practical nature of our original ideas. The most critical addition was the carbon footprint of a house.

“Carbon footprint,” or “upfront carbon emissions,” can be defined as the sum of carbon emissions over a product’s lifetime—from the extracting of raw materials to its processing, shipping, assembly, maintenance, and eventual disposal or recycling. “Carbon emissions” is shorthand for carbon dioxide (CO2)–equivalent emissions. As a prevalent greenhouse gas, CO2 is used as a unit of measurement, meaning the effect other greenhouse gasses have on trapping heat are expressed as the equivalent in CO2. This matters because there is more CO2 (and other greenhouse gasses) in our atmosphere than there has been for at least 800,000 years. In fact, there is nearly 50% more carbon in the atmosphere now than there was at the start of the Industrial Revolution. Time is running out—if emissions continue at their current rates, temperatures will continue to rise. The U.N.’s team of scientists says we need to reduce emissions by 50% by 2030, and by 100% (net-zero carbon) by 2050. Those ambitious targets don’t guarantee a safe future, but they do improve the odds.

Want to learn more about building a pretty good house? Sign up for the Sustainable Building Accelerator and learn directly from author and architect Emily Mottram

No discussion about the PGH is complete without talking about the group process that birthed it. I believe the Portland group was the first of its kind, but there are now several around New England, and they are starting to pop up in other regions too. While online groups, books, webinars, and conferences all have their place, it’s easy and fun to get together informally over drinks to talk about building science. For the group I started in central Maine, I chose the name “BS and Beer”—“BS” stands for building science, of course. Others are welcome to use it (but please don’t try to copyright it). Get in touch at prettygoodhouse.org so we can add the group to the list. The website includes guideposts to help designers, builders, and current or aspiring homeowners understand and think through all the elements when creating their own PGH.

A note: The New Carbon Architecture by Bruce King is a must-read for anyone who wants to learn about low-carbon building. In a GBA comment, King wrote, “Borrowing from Michael Pollan: Build, but not too big, and mostly with plants. Nuff said.”

Elements for a pretty good house

Now is the worst time in human history to dump heavy carbon loads into the atmosphere, but that’s exactly the result of many construction practices. Even builders who are concerned with energy efficiency often front-load enormous amounts of carbon-intensive materials with the expectation of savings over the building’s life cycle. So, we must ask ourselves: If we have only a decade to mitigate the worst impacts of climate change, what should we do instead? Building Pretty Good Houses is one answer.

So how do we do that?

1. One way is to be part of a sustainable community. Plan for access to community solar, jobs and services that minimize driving, and shared infrastructure such as roads, internet service, and the electrical grid. A one-hit wonder in the middle of the woods often comes with a bigger carbon footprint than a community-based home.

2. Consider following our version of the “KISS” principle: Keep It Simple and Safe. A house should be easy to understand and operate. Simple shapes are easier to air-seal and insulate, they perform better in harsh weather, and they require fewer materials and less maintenance than more-complicated buildings.

4. Be built with wood and plant-derived materials. Ensure wood is sustainably harvested and locally sourced, if possible. Otherwise, healthy forests are better left to remove CO2 through photosynthesis, sequestering it in the plants and soil. In general, the more that materials are processed, the higher their carbon footprint.

5. Another key factor is to be a renovation rather than a new build. The embodied carbon of an existing house has already been sequestered. When renovating, aim for at least the current International Residential Code performance for new homes.

6. Invest in the envelope and other parts that are hard to change later. Insulation and air-sealing should be good enough that active heating and cooling systems can be minimal.

7. You should also have balanced mechanical ventilation with heat recovery for high indoor-air quality and low energy usage. Be sure to commission the equipment after installation—it often needs to be adjusted.

8. Use air-source heat pumps for heating and cooling. Minisplits can be efficient to -15°F or below, are affordable (especially for the sizes and number of units needed in a PGH), and are relatively simple to install. In some locations, other systems make more sense, but in most places it’s hard to go wrong with a minisplit.

9. Make sure to incorporate good windows and doors. Even the best of these components perform like an R-10 wall, which is pretty bad, so don’t skimp here. You can also include photovoltaic panels or be PV-ready. Panels pay their carbon debt in 2 to 4 years.

The original PGH had simple rules, borrowed from Dr. Joseph Lstiburek of Building Science Corporation. In a Green Building Advisor comment, reader Doug McEvers suggests using the advice of Harold Orr, a mechanical engineer and pioneer of high-performance building, whose research led to the creation of the Passive House standard. For superinsulated buildings, Orr advises dividing the location’s heating degree days (HDDs) by 180 to get the R-value for a wall, and by 120 for a roof (this is close in line with Lstiburek’s advice). In a cold climate, such as International Energy Conservation Code (IECC) climate zones 5 and 6, use:

Previous: Is a “Pretty Good House” Good Enough? Next: Why Don’t We Build Better Houses?