What the Code Says about Interior Trim and Cabinetry

Though there are not many codes for trim carpenters to follow, some things require planning and attention in order to pass inspection.

Synopsis: Code books say very little about interior trim and cabinetry—aside from details related to stairway handrails, there are only a few details in the International Residential Code that finish carpenters must be concerned with. These include clearances for baseboards and cabinetry, requirements for doors and windows, and flame-spread details for interior trim.

If you read through the pages of the 2021 International Residential Code (IRC), or versions before it, you’ll discover very little regarding either interior trim carpentry or cabinetry. Code gets very specific about things like how many nails of a particular size are needed to fasten sheathing, but says little about installing door casing or kitchen cabinets. Not that it has nothing at all to say about the topics, but what it does say is often indirect. For the most part, trim and cabinetry are fabricated and installed according to conventions developed by carpenters, not code writers. But there are some things that require planning and attention in order to pass inspection.

Many final inspections fail because electrical, plumbing, or mechanical “trim” isn’t correct. Carpentry trim can fail, too, and it’s usually something related to stairway handrails, which we touched on in Guardrails vs. Handrails in FHB #289. In this issue, let’s look at some other places where the code and trim carpentry meet—or at least pass each other and wave. 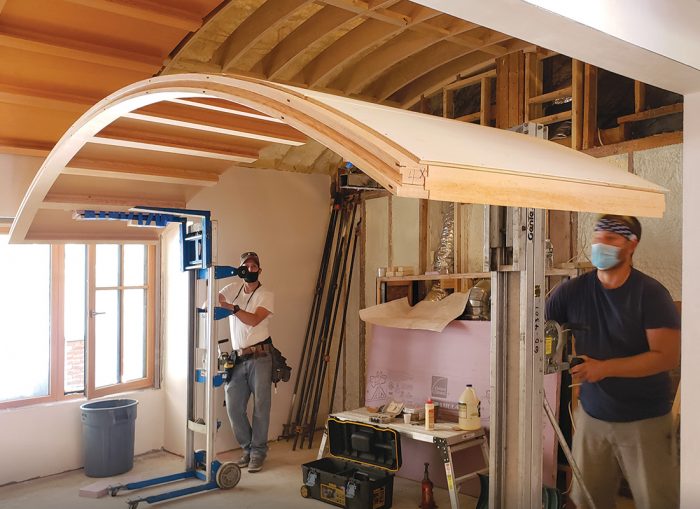 With your handrails up to snuff, let’s clarify some other things related to stairs. Rise and run is a common subject and it’s wise to verify the math at rough and final inspections. Within a flight of stairs, the tread finish material won’t affect the riser height, as adjacent treads generally have the same thickness. However, the risers adjacent to the upper and lower landings often create headaches. The top and bottom landings are usually part of a larger floor, and the thickness of the finish flooring may be different than the thickness of the treads. Planning the flooring before building the stairs is critical so that your tallest riser is no more than 3⁄8 in. taller than the shortest. Don’t worry about carpet, rugs, or runners, though. Since 2009, the IRC has required the dimensions be measured exclusive of these textiles.

Baseboards aren’t something you generally think about with codes, but there is some relation—just ask plumbers. Pipes that run through wall plates and studs typically require large holes, which don’t leave a lot of wood between the pipes and the drywall. Plumbing, as well as wires and dryer vents, needs to be protected from errant fasteners, and this is usually accomplished with stud guards—strips of steel applied to the plates and studs—to prevent fasteners from poking holes in these utilities. These guards protect from drywall fasteners, but also from a nail from hanging a photo, or a nail from baseboard or crown molding. On the plumbing side of things, this requirement originally came from the 1993 BOCA plumbing code serving the Northeast, and says that when nail-plate protection is required at bottom and top plates, it must extend at least 2 in. above and below the top or bottom edge of the plates. This extended protection is specifically to safeguard pipes from nails in baseboards and crown molding. That’s plumbing code, not trim carpentry, but it does speak to the relationship between every trade and feature in a building.

One place that baseboard has unfortunately faced code is in overzealous interpretation of minimum stair and hallway width requirements. Section R311.7.1 requires stairways to be at least 36 in. wide. Though baseboard would reduce the clear width at the treads, this section makes it clear that the 36-in. width is only required above the stair-handrail height of 34 in. to 38 in., but not below. Baseboard or other finishes below the handrail can intrude on the stairs just as much as the handrail, which can protrude as much as 4-1/2 in. on one or both sides of a stair, leaving a minimum 27-in. clear space between handrails. This allowed reduction in width follows the shape and movement of the average person using a stair: wider at the shoulders than the feet.

Though the code is clear that it’s OK for baseboard to encroach on stairways, section R311.6 for hallway width doesn’t make the same statement. Hopefully there are few inspectors who would make an issue about it, but they do exist. Commentary to the code has previously stated that the requirement for 36-in.-wide hallways was meant to accommodate moving furniture into rooms off the hallway and allow safe egress from the structure (commentary for the 2021 IRC hasn’t been published yet). If that same furniture is hauled up a stair with 27 in. between handrails, it will fit through a 36-in.-wide hall with standard baseboards–whether it can make the turn into a bedroom with a 16-in.-wide door is another question. When considering the importance of hallway width and if baseboards should be a concern, keep in mind that there are zero requirements for interior door size and keep things in reasonable perspective.

“…no one expects the trim carpenter to peek at the HVAC plans.”

When it comes time to set the cabinetry, the code is mute on how to install it, but there are some provisions to consider. The code won’t stop you from arranging kitchen cabinets in such a way as to make the space unusable, but if you want to include cabinets or a range hood of combustible materials above your new range, you’ll have to look to the mechanical and fuel gas chapters of the code. Sections M1901.1 and G2447.5 require at least 30 in. between the top of a cooking top and combustible materials above. Section G2447.5 goes a step further and includes metal cabinets, with exceptions for items with adequate flame protection. Wood and wood-clad range hoods are allowed, but their design and placement has to be carefully planned. If you want to install a microwave with integral exhaust over the cooking surface, section M1503.2 requires these systems be listed and labeled in accordance with UL 923.

When setting interior doors, as mentioned above, there are no size requirements. However, depending on the HVAC design, you may have to pay attention to the space between the bottom of the door and the floor. For nearly two decades the IRC has required duct designs to comply with ACCA Manual D, an engineering standard for duct design. Following this standard, you find, not surprisingly, that you can’t effectively push supply air into a room unless there is a path for return air to leave. In recent years, builders and building departments have caught on to this standard, and called for transition grilles in walls between bedrooms and hallways, where a large return-air opening is located. However, codes and standards are full of options, and you can design a large undercut under the door rather than a transition grille. How much undercut is needed is directly related to the cubic feet per minute (CFM) delivered to each room and the width of the door; the height of undercut based on these two variables is provided in Table A12 of ACCA Manual D. 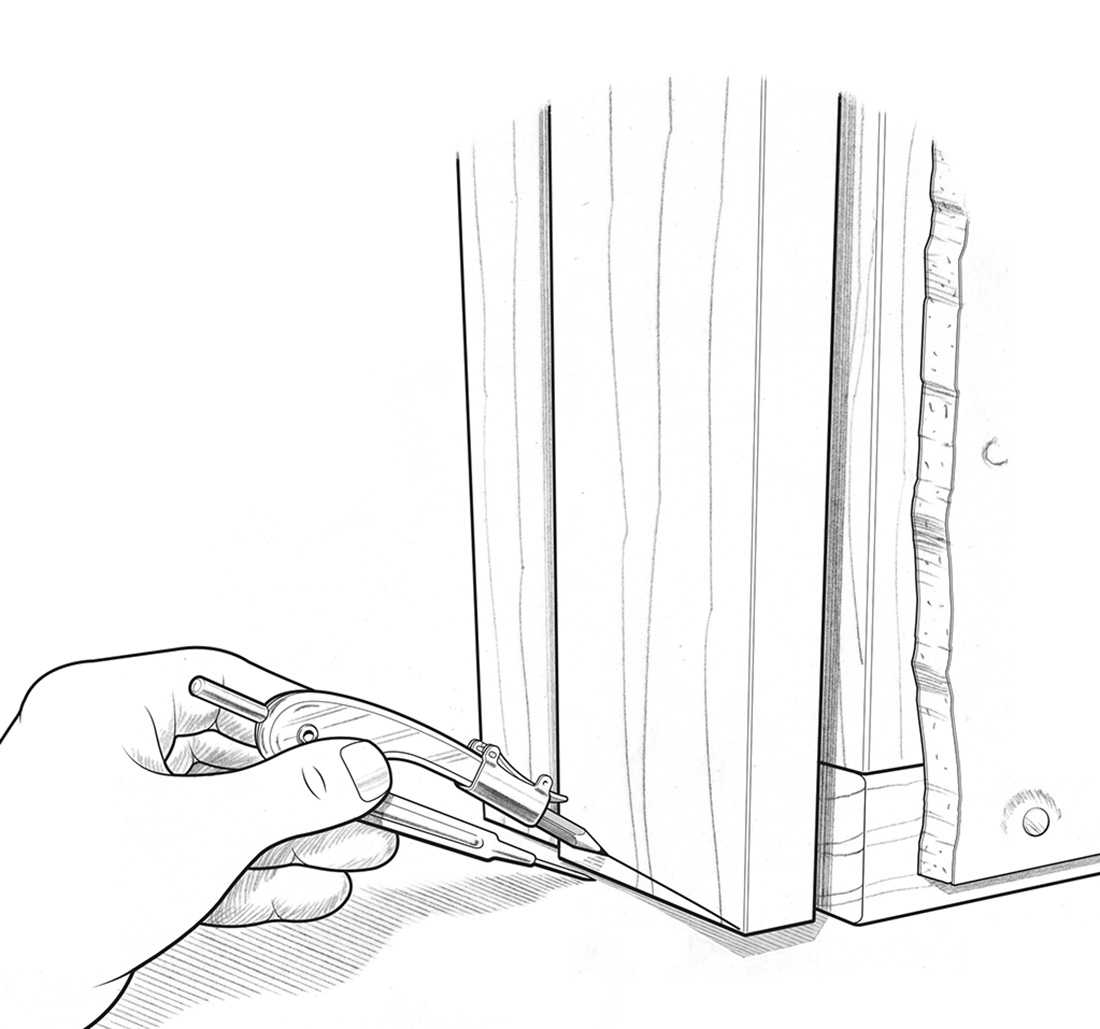 That said, undercutting a door to serve as a return-air path is not exactly the best choice. An average-size room could require 200 CFM, and for a 30-in.-wide door, a 3.2-in. vertical undercut is required—measured from the top of the finished flooring or carpet. Communication from the superintendent or foreman is critical for this design, as no one expects the trim carpenter to peek at the HVAC plans.

Windowsills are also part of the trim package, and the code once referred to them in a very important subject—egress windows, which are known as “emergency escape and rescue openings” in the IRC. These can be no more than 44 in. above the floor. Up until the 2021 IRC, the maximum height of 44 in. above the floor was referenced to the “window sill,” which led some people to measure to the trim in front of the actual window. A large revision to this entire section was approved in the 2021 edition and the reference is now to the “bottom of the window opening,” clearing up an issue that likely stressed many a builder/building inspector relationship.

It’s worth mentioning the one and only code provision that specifically refers to “trim,” described as “picture molds, chair rails, baseboards and handrails.” It’s in an exception to section R302.9.1, which covers the “flame spread index” of wall and ceiling finishes. The IRC limits the flame spread index of wall and ceiling finishes to 200 or less but exempts the above trim details, as well as doors and windows and their frames, from the limit. Though it’s not specifically listed, it’s fair to include crown molding in this category. It might not matter, though, as common wood species are all below 200 anyway. The “smoke developed index” for these trim elements is limited to 450 or less under section R302.9.2 and doesn’t carry this same exception. However, wood products have a smoke developed index below 200, so this is another nonissue for conventional trimwork.

Previous: The Misused and Confused Chair Rail Next: Make the Most of Moldings