Overall rise and run, riser height, and headroom are just some of the factors to work out for a safe and comfortable stair.

Humans seem to have a built-in “stair-ometer” that tells us when stairs are comfortable to climb or when they’re uncomfortable or even unsafe. It’s the same instinct that tells us when we’re on a ladder or climbing a hill that’s too steep. That sense is a reaction to the ratio of the stairs’ overall rise (its height measured vertically) to its overall run (its length measured horizontally). As the slope of the stairs becomes steeper, they start to feel less safe.

Safety also depends on the dimensions of each step being uniform, and inspectors are very particular about this detail. More than a ⅛-in. difference in riser heights can mean that your stairs will fail a final inspection. But more important, that much difference is a safety hazard because it can (and probably will) cause someone to trip as he or she uses the stairs.

Another factor that affects the design of the stairs is the amount of headroom above the treads. The building code requires that the vertical distance between the tread nosing and any finished ceiling be a minimum of 80 in. This requirement often means making the stairs a little steeper to avoid a forehead-knocking beam, which can be done by shortening the overall run. But make sure the run-to-rise ratio is acceptable and not too steep to be approved.

Yet another factor to consider is whether the stairs are a straight, uninterrupted run or whether they include a landing. In this house, the stairs were designed to fit below the space below a dormer, making the floor plan of the stair chase almost square. The square chase gave the designer more latitude for laying out the rooms on the first and second floors than he would have had with a straight stair run and a narrow, rectangular stair chase.

At this stage, the finish flooring isn’t in place, of course, but you still have to account for its thickness in your stair calculations. For this house, the finished flooring at both the top and bottom of the stairs would be ¾-in. hardwood, so the overall rise was the same as the distance between the surface of the sheathing on each floor. If 1-in.-thick tile had been specified for the first floor instead of hardwood, for example, that would have shortened the overall rise by ¼ in.

After taking the overall rise measurement, we checked the measurement on the opposite side of the chase and marked the height of the landing platform. Because the floors were dead level, we just measured down from the floor sheathing.

The rise of each step, called the unit rise, is the vertical distance between the top of one tread and the top of the next tread. The run of each step, called the unit run, is the horizontal distance from the nosing (the front edge) of one tread to the nosing of the next tread (see “Basic Stair Dimensions”). Rise and run are not cast-in-stone numbers, however. To make every step identical and make the stairs begin and end at specific locations, the numbers have to be tweaked. The comfort aspect has to be weighed against other factors, such as tight quarters in the stair chase or limited headroom, to create the safest and most comfortable stairs for the particular situation. 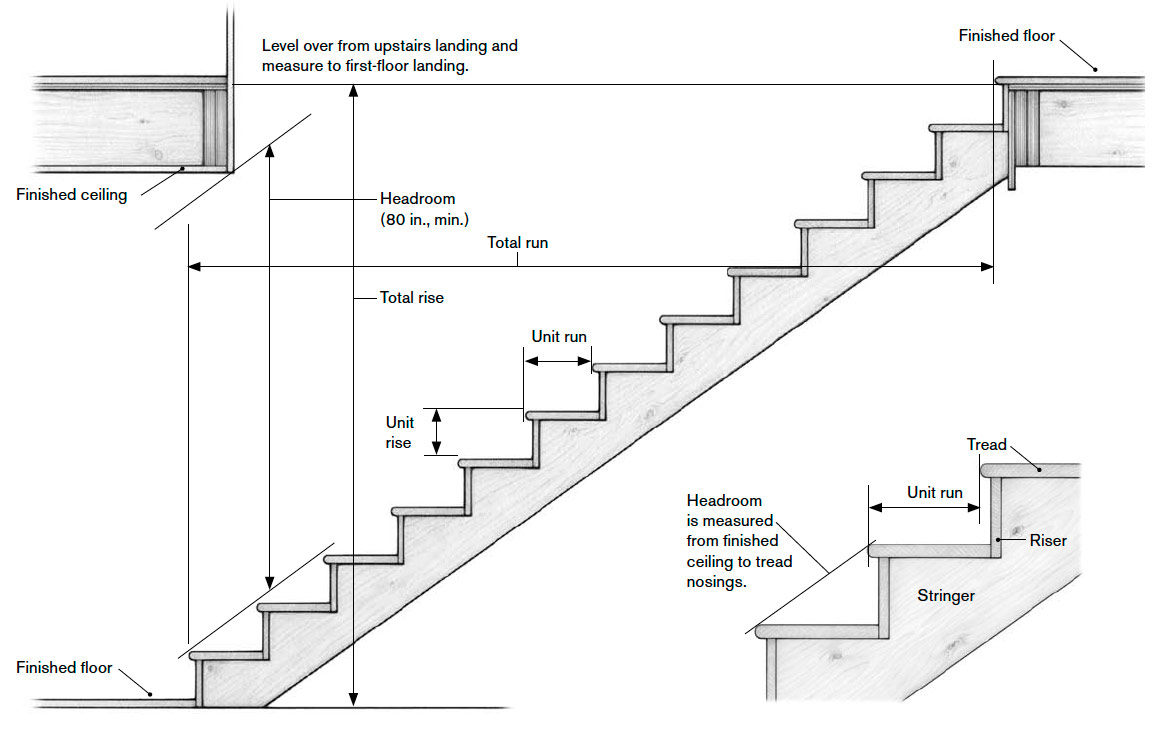 There are many formulas for making sure that the unit run-to-rise ratio falls within acceptable parameters, but each is theoretical. The exact measurements for rise and run vary from staircase to staircase and should never be assumed without careful calculation based on measurements taken at the site. The optimal step size for stairs is a 7-in. rise and an 11-in. run. But those numbers won’t work for every situation, so here are some alternative formulas that are used routinely:

The last formula is the one I use most often. Note that some communities set the maximum allowable rise at 7 in., so before you build your stairs, check your local codes carefully.

Start your stair calculations by determining the number of rises. This is usually done by dividing the overall rise by 7. But the stairs in this house were not just a simple straight run, so we figured the number of rises a different way. Each stairway actually consisted of two flights: the first from a floor to a landing, and the second from the landing to the floor above. Code specifies that a landing has to be at least 36 in. wide (the minimum width of the main stairs). These stairs were 40 in. wide so we made the platform the same width. Subtracting 40 in. from the width of the chase to account for the landing gave us the overall run and restricted the number of treads for each flight to 6. The overall number of rises would then be 14 because we had to include the rise to the landing and the rise to the floor above.

The overall rise measured 113¾ in. between the first and second floors. To calculate the exact height of a single rise, we divided 113¾ in. by 14. The result is 8⅛ in., which is the height of each riser. A construction calculator really comes in handy for this procedure. Subtracting the width of the landing from the stair-chase opening, we figured the run of each step to be 9 in. While not optimum, that rise and run combination still fit the parameters of our three formulas:

Bottom line: The stairs would be slightly steeper than ideal but they would still be comfortable and safe to use.

Next: 2 Rules for Building Comfortable Stairs