Dress Up a Gable With Shiplap Siding

This traditional detail is fast to install and adds historic charm, even on a new house.

The towns surrounding Boston are a hive of building and remodeling work, so I’m not exaggerating when I say that if you stopped in at my local building department in Wellesley, Mass., you would learn that the department issues about 80 permits a year for new homes. Of those 80 permits, most are for expensive spec homes being built from plans that look like they all came from the same house-design website or that include default details that seemingly came straight from house-design software. For the seven to eight houses my company builds each year, we try to be the exception rather than the norm.

Wellesley is full of historic houses, so we like to give a nod to the surrounding architecture by incor­porating classic details in our new builds. One of our favorite custom elements is to change up the type of siding on different parts of a house. For ­instance, it’s not uncommon for us to side the main house with cedar shingles, the garage with vertical board-and-batten siding, and the mudroom connector between them with clapboards. This gives the house the look of having been added on to over the years. We also can create that traditional vibe by changing just a small section of siding, such as on the upper part of a gable end. Instead of simply running the siding material all the way up, we ­often use shiplap boards to set off the gables.

A three-person team—two installers working from staging who feed measurements to another worker at a cut station on the ground—can side a large gable end in an hour or two. It’s a minimal change in installation technique from that used on the clapboards covering the rest of the house, as well as an upcharge for the wider boards, but it makes a substantial impact on the look and feel of the exterior.

Start with a solid game plan

Align to the windows

Secrets to a smooth process 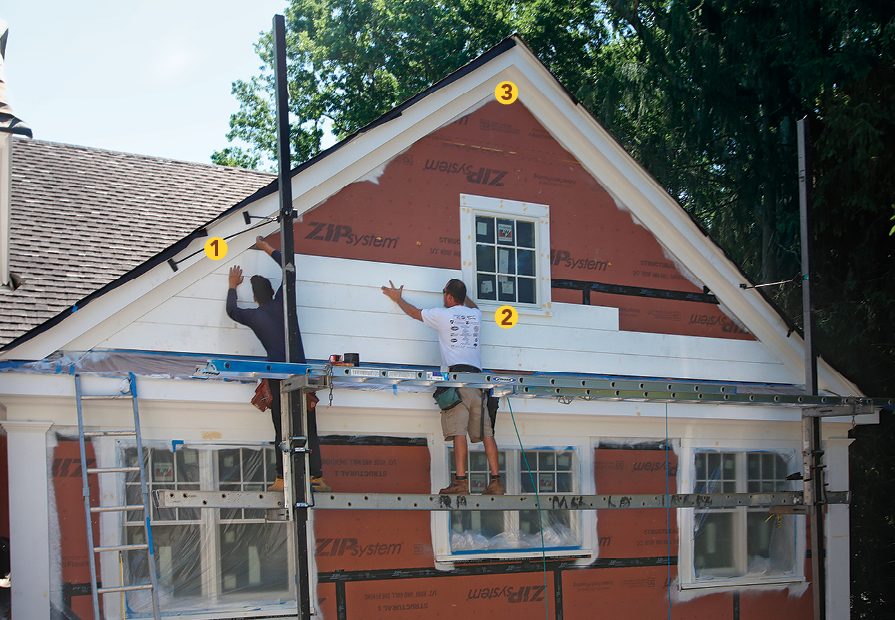 To speed installation and improve the look, hide the angled cuts—necessary where the siding meets the roofline—under the rake trim. Although on this job we had several inches of space under each piece of rake trim before butting up to the unseen blocking used to space it away from the sheathing, we generally aim to slide the siding about an inch under the rake board on each side. This means our cuts have to be close, but not dead-on accurate, and it allows us to slide pieces side-to-side as necessary when fitting a single piece under both rakes.

When fitting a piece between a rake and the side of a window, or notched around the top or bottom of a window, we prefer to cut the angle first and then mark the window cuts in place. For butt cuts, a single mark is all you need. For notches, mark the outside edges of the casing (below left), then use the spacer block as a reference point for measuring the height of the notch (below right). 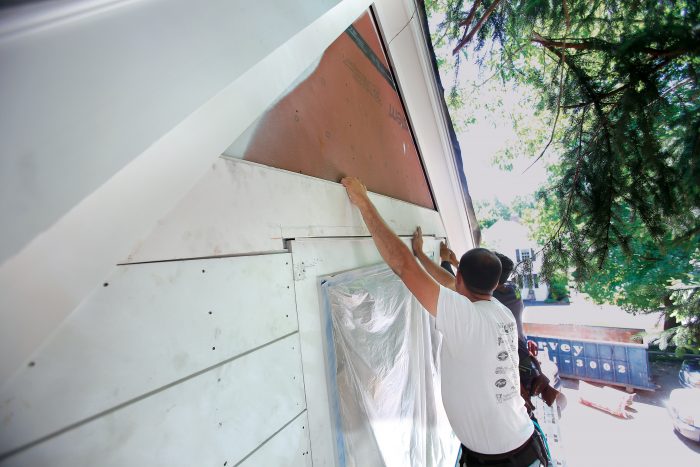 Because the siding slides under the rake boards, the uppermost piece must be fit at the same time as the piece below it. Once the last piece is in place, we fasten it if we can. If it’s small and likely to split, we let it float without fasteners. 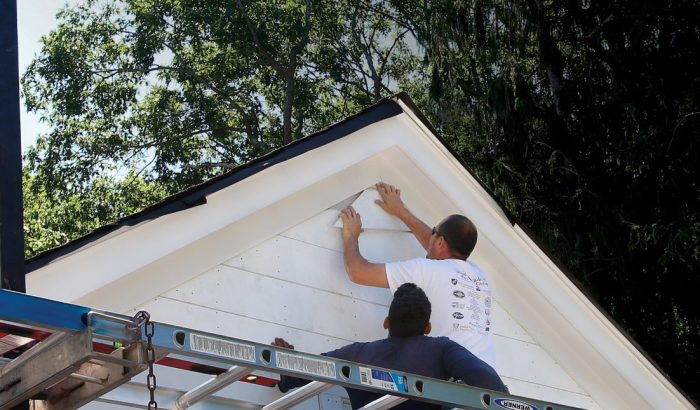 John Hourihan is director of operations at Riverstone Custom Builders in Wellesley, Mass., and a Fine Homebuilding ambassador. Photos by Justin Fink.

Trusted, comprehensive guidance from the pros for choosing, installing, and repairing siding and exterior trim

Become a member and get unlimited site access, including the Siding & Exterior Trim Project Guide.