Learn how a sleeping room is legally defined and what sort of egress openings are mandated by building codes.

Synopsis: Code expert Glenn Mathewson details the code requirements for emergency escape and rescue openings (EEROs), commonly known as “egress windows.” He explains that all “sleeping rooms” must include an EERO, and how a sleeping room is defined, as well as required dimensions for the clear opening.

Though it’s long been considered a code requirement to have an egress window in every bedroom, it’s actually not. In fact, you won’t find a single mention of an “egress window” anywhere in the IRc. What is required is an “emergency escape and rescue opening,” or EERO. While a window is a common opening to the exterior, it is sometimes just as effective to use a door. Most people don’t think of a door as a solution, partly because “egress window” has become so prevalent in social dialog. So much so that, even though the code has always required an “opening,” the text was modified in 2015 to make specific mention of a door as an option. I know “EERO” doesn’t roll of the tongue quite as comfortably as “egress window,” but from this point on—in this article and in our work—we should get used to the term.

Every day, we casually enter and exit rooms though interior doors. When we are awake and aware, hazards (in this discussion we are generally speaking of fire) are less likely to sneak up on us and inhibit our use of these typical entry and exit points. Concerns arise when our reactions are delayed and the hazard has a chance to grow without our notice. For this reason, EEROs are required in rooms where sleeping is likely to occur. Though “bedrooms” immediately come to mind, the subjectivity of room labels allows too much potential for loopholes. Instead, the IRC requires that all “sleeping rooms” have an EERO. With no common societal usage of this term, the building official can interpret and apply it as intended by the code.

The general rule of thumb is that an EERO should be provided in rooms where it is probable that one may sleep, not just possible. Sure, it’s possible for people to pass out next to the toilet, but it’s not typical behavior, so bathrooms don’t require EEROs. Rooms designated as “offices,” “libraries,” “sewing rooms,” “exercise rooms,” “craft rooms,” and the like can have different interpreted uses, and many use these specialty terms on their building plans as a way to skirt the need to provide an EERO.

A more responsible way to follow the code is to take the home’s floor plan and remove the room names, so all that is shown is the overall shape of the house and the outline of the individual rooms. Now imagine asking someone with no knowledge of the home, code, or construction to label each room. Chances are, some or all of those specialty rooms will be seen as bedrooms. This is an important consideration, because sooner or later a new owner will be moving their bedroom into a past owner’s sewing room, and the label on the plans won’t have any bearing on the need for an EERO.

Beyond sleeping rooms, the IRC also requires every basement, finished or not, to have at least one EERO (with an exception for storm shelters and basements used only to house mechanical equipment not exceeding a 200 sq. ft. in total floor area). Basements, finished or unfinished, often become sleeping rooms. The same can be said for habitable attics, which also require an EERO.

Self-preservation mechanisms in each of us are actually the “first responders” to any crisis, and the code aims to assist these efforts. Limiting the sill height and ladderless-window-well depth to 44 in. for all EEROs allows for children and others of shorter stature or limited strength to ascend up and out the window. The code also addresses the operation of the openings. A person’s typical calm and casual operation of a window or door changes completely when he or she is panicked, half-asleep, and sucking in smoke. To this end, the IRC requires any opening or any cover over a window well to be operational or removable without the use of a key, tool, or special knowledge. Covers over windows must also not be heavier than the force required to operate the opening. 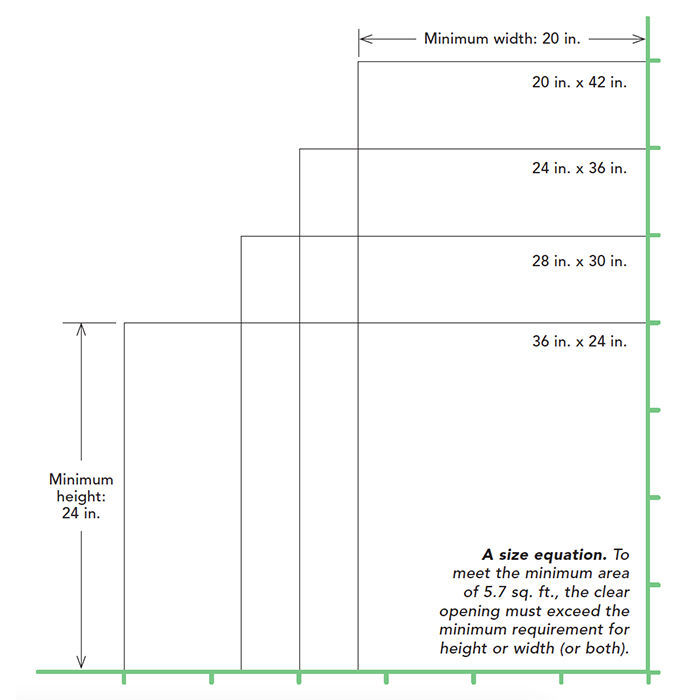 The majority of the size provisions for EEROs are an effort to provide for effective rescue. The minimum size requirements for the opening, whether door or window, aren’t based on the occupant trying to escape, but instead on the shape and function of a firefighter in full gear with an oxygen tank and mask. There are three separate and distinct size requirements for EEROs, and each must be satisfied independent of the others:

There is an exception: A minimum area as low as 5 sq. ft. is allowed for grade-floor or below-grade openings. It’s assumed that at this height, a ladder at the exterior is not necessary for egress, and thus the opening can be smaller in overall area. In addition, new to the 2018 IRC, solar panels cannot be mounted to the roof in front of EERO windows above that roof, and a path not less than 36 in. wide from each of those windows to the roof edge must be provided for escape or rescue.

As I established earlier, the key term is “opening” rather than “window.” The code doesn’t care what opening you escape or are rescued from, whether it be a door, window, bulkhead, fenestration, or something of any other title, as long as it opens directly to a public way or to a yard or court that opens to a public way. (For understandable reasons, the opening can’t lead to an inaccessible courtyard.)

There are other egress provisions in the IRC that are related to specific applications and systems, such as replacement windows, basement additions, fire sprinklers, and window-opening control devices. For more on these specific provisions, see section R310 of the 2018 IRC.