Architects Reid Highley and Jim Compton show you how to choose shutters that match the style of your house and the proportion of your windows.

Before there were windows, there were shutters. Now as then, shutters serve a number of useful purposes when they’re functional. Closed shutters block searing sun, howling winds, and pelting rains; insulate in the winter; and deflect prying eyes year-round. The use of operable shutters has largely been lost in the United States, however, where nonfunctioning replicas have become the norm. If they’re installed well, though, even inoperable shutters can add a layer of architectural detail to a house.

Shutter style was born of function

Traditionally, shutters were found on colonial, Georgian, and federal-style houses, but they fell out of favor during the Victorian Era as drapes and blinds took their place. When colonial-revival styles sparked renewed interest in classical architecture in the late 1800s, shutters experienced a resurgence before again losing ground to storm windows, awnings, and mechanical HVAC.

Let’s start with a few things you should never do if you want shutters to have an authentic appearance. First, don’t install shutters that don’t fit the window openings. An all-too-common sight is a tall, slender shutter abutting an enormous picture window. Shutters should be sized and shaped to cover the window opening completely when they’re closed. Properly sized shutters fold tightly between the exterior window casings, leaving a narrow gap at the perimeter.

Next, don’t install louvered shutters backward. Shutters are designed to shed water away from the window when they’re closed. To accomplish this, the louvers must be sloped to the outside of the house when they’re pulled shut. This means, of course, that in the open position, properly installed shutters have louvers with their leading edges pointing up. Many molded vinyl shutters violate this obvious rule, and builders frequently install shutters in the wrong orientation in a good-faith effort to keep water off houses. That leads to another common shutter blunder: shutters mounted flat to the house, directly against the siding.

Shutters attached directly to a house can collect water and debris, leading to premature deterioration of the siding. If shutters are mounted using authentic, operable hardware, however, they are spaced far enough from the house to allow air circulation and swing away from the siding for easy maintenance access.

Surface-mount shutter hinges are ordered according to their offset, the dimension between their pivot point and mounting plate. The larger the offset, the larger the total swing, or throw, of the hinge. A large offset is required for deeply recessed windows, such as those that sit in a brick facade. Measure from the hinge mounting surface to the deepest portion of the window casing to determine the minimum offset required for your window. Deep shadowlines are a pleasant visual consequence of this spacing.

Finally, don’t omit shutters from a window due to interference from nearby objects. Frequently, a window is tucked tight to a chimney or located at an inside corner where the shutter won’t fold flat to the house. Don’t let this deter you from installing a shutter at the opening. After all, half a pair of shutters never did a window any good. The idiosyncrasies of mounting shutters in these locations is part of what makes an authentic installation so appealing. At pairs of windows where there’s little room to install hinge hardware on the mullion, consider bifold shutters.

Operable hardware is critical for an authentic appearance, even if the shutters will rarely swing after they’re put in place. Early hardware was crafted with wrought iron or cast iron. Iron is still available today, though powder-coated steel often takes its place. For homes near the ocean, consider upgrading to bronze or stainless steel.

With decorative spade or bean-shaped ends, strap hinges are the most popular type of hinge. L-shaped hinges are another frequently used style that reinforces shutter corners. Either hinge type can be mounted to the front or the rear of the shutter. Both strap hinges and L-shaped hinges mount to a pintle. Early pintles were nothing more than spikes hammered into wood framing. Today, pintles can be purchased with lag-screw ends or with flat plates mounted to the window casing or mortised into the jamb.

Shutter hold-opens, tiebacks, or “dogs” keep shutters from flapping in the breeze. Shutter dogs come in many shapes and sizes, from simple metal plates to decorative cast figures. Most popular is the scroll, or S-shaped shutter dog. An alternative to the traditional rotating tieback is a long hook and eye that props open the shutter.

In addition to hinges and hold-opens, hardware such as pull rings, slide bolts, or hook-and-eye closures can further enhance the authenticity and visual appeal of shutters. 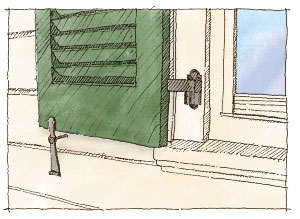 Operable hardware: In the correct orientation, shutter louvers slope toward the house when they’re open. Properly sized hinges swing the shutter away from the window opening and over the adjacent siding and trim. Even if shutters are fixed in place, you can add authenticity with shutter dogs. 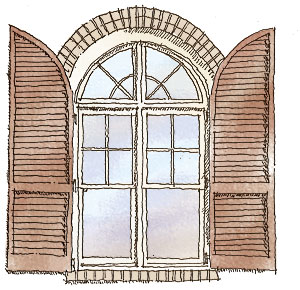 Match the window: Select shutters that have the same size and shape as the window when closed. As with the archtop design shown here, if shutters have dividing rails, line them up with the sashes of the window. 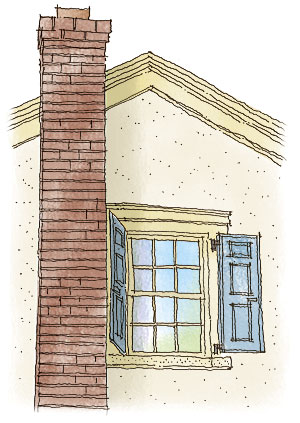 Never split a pair: Where a window abuts a chimney or other obstruction, insist on installing both shutters even if the one closest to the obstacle doesn’t open past 90°.

Shutters must match the style of the house. These three early-American architectural styles show how using appropriate details can accomplish an authentic appearance, even if shutters are now more decorative than functional. 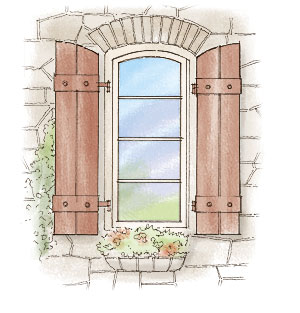 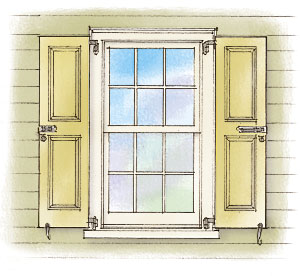 Paneled: Solid raised-panel shutters offer the highest degree of visual privacy and protection from the elements. Accessory hardware such as ring pulls, slide bolts, and shutter dogs adds authenticity to a shutter installation. 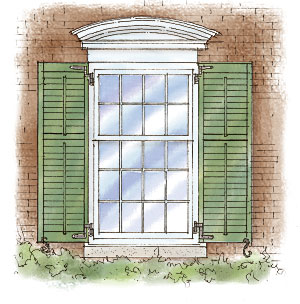 Louvered: Louvered shutters are particularly well suited to warmer climates, where they admit fresh air while deflecting the sun’s rays. Some shutters have tilt rods to allow adjustment of the louver angle throughout the day. 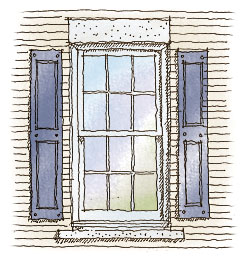 On today’s houses, it’s all too common to see undersize shutters installed hard against the house with siding revealed between the shutter and the window trim. Even inoperable decorative shutters should be large enough to cover fully the opening they’re intended to protect when closed. When installed with operable hardware, shutters overlap the window trim instead of sitting next to it. Real hardware is also offset to hold the shutters away from the siding for pleasing shadowlines.