Split-jamb doors are a lot like conventional prehung doors, but they have a two-piece jamb joined with a tongue and groove. The joint, which is hidden by the stop, allows both sides of the jamb to be cased at the millwork shop. The jamb can be separated when it’s time to install the door.

This designs means you won’t have to install casing in the field, and you also get some wiggle room with regard to wall thickness. This quality makes split jambs great for old houses, which often have wavy plaster and odd-size studs. In addition, the millwork shop generally installs the casings and prepares the jambs for less than what I’d pay a competent finish carpenter to do the same work.

I’ve heard old-school carpenters deride split-jamb doors, claiming they can’t be shimmed, but that’s simply not the case. You just have to change your methods. I’ve never had a problem with any of the several hundred split-jamb doors I’ve installed over the years.

The first step is to check the floor under the jambs for level. A 32-in. spirit level and a graduated shim make it easy to see how much the floor is off. 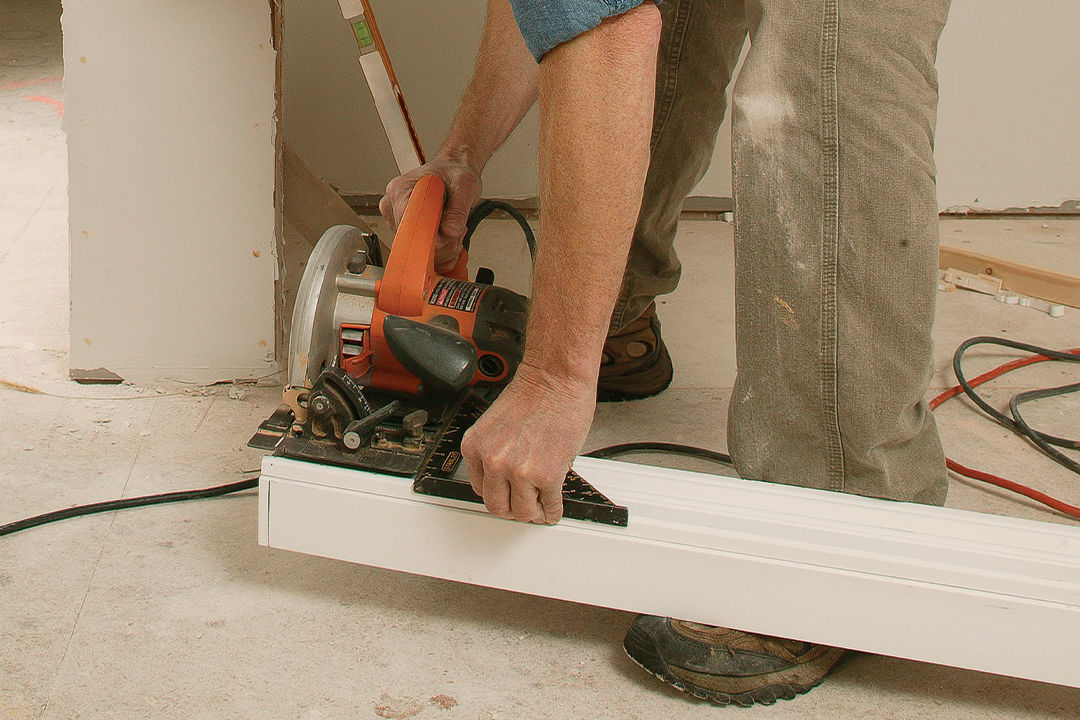 If the floor is out of level, cut one of the jambs a corresponding amount shorter than the other jamb. If a tile or hardwood floor will be installed later, raise the jambs with scraps to match the floor’s final height. 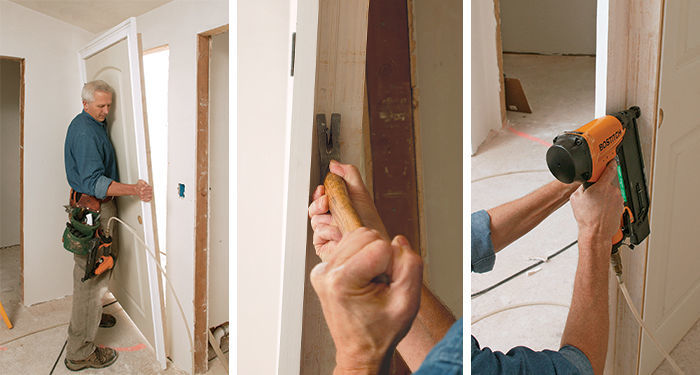 Confirm that the hinge-side jamb can be made plumb in the opening. Then remove the door, and pull out the duplex nail or hardware holding the door to the jambs. Replace it with a single finish nail. 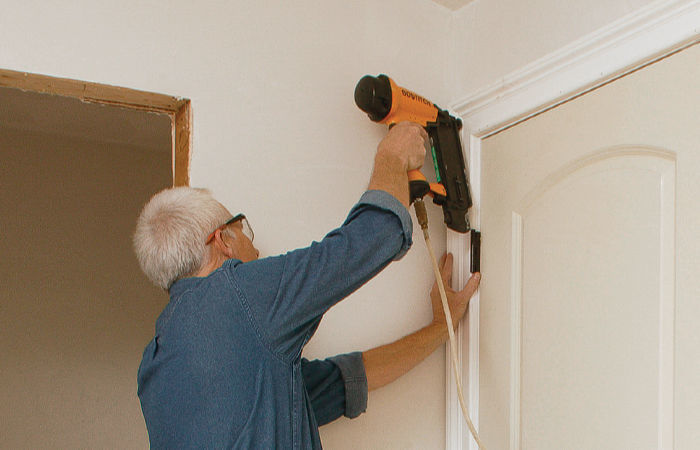 Plumb the door with a level held along the casing leg, and drive 2-1⁄2-in. finish nails through the casing into the jack studs and header. 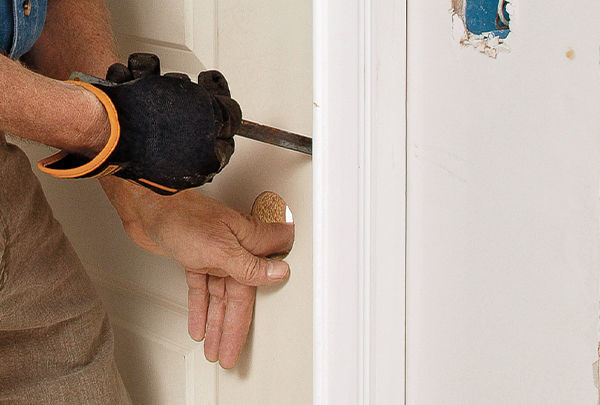 Use a fine-tooth hacksaw blade held in a gloved hand to cut through the finish nail that holds the door closed. Go slowly so that you don’t damage the jamb or stop. 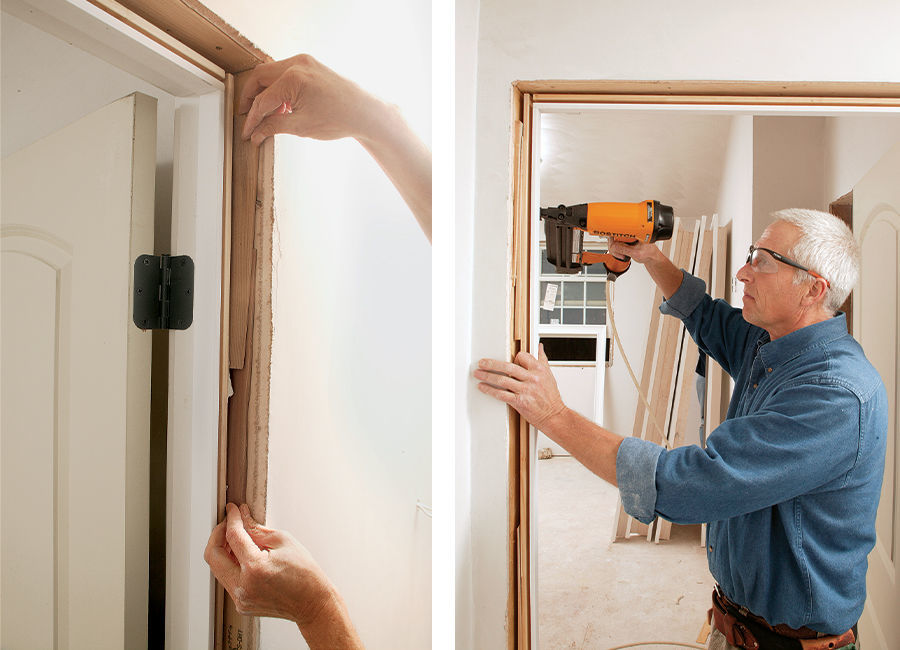 Use 3-in.-wide shims (held vertically) to take up the space between the jamb and the rough opening. Tack the shims in place, but keep the nails away from the groove so that you can install the tongue side of the jamb later. 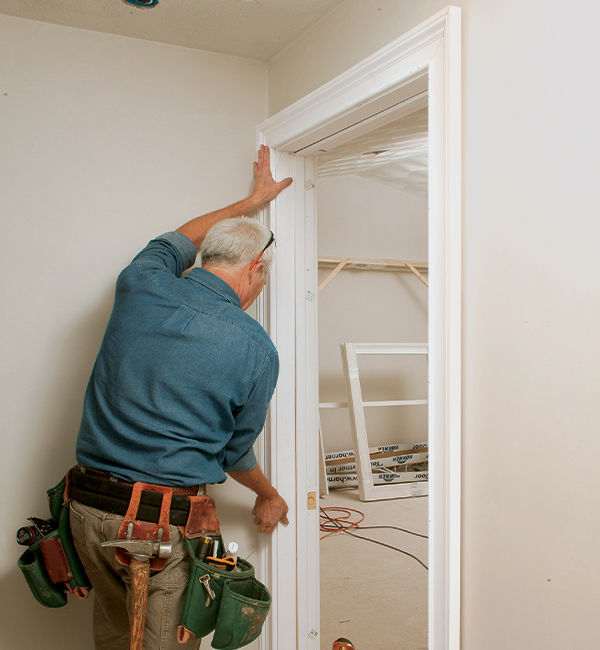 Starting at the top, slip the remaining half of the split jamb onto the half already in place, and secure it by nailing through the stop and casing.

8. Screw through the hinges 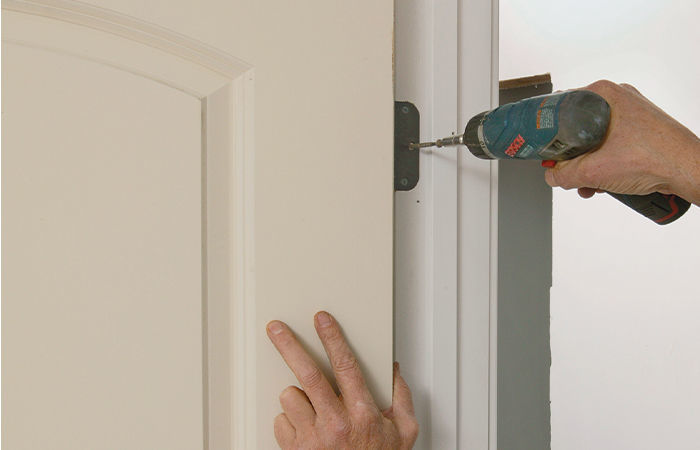 It’s a good idea to swap one of the short screws in each hinge with one that goes into the framing. Plan ahead for this because 2-1⁄2-in. #9 wood screws in the correct finish are tough to find. 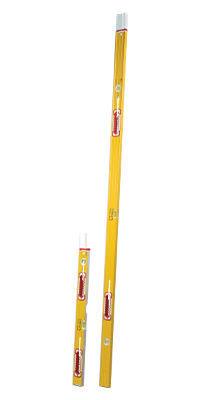 The most important tools in the door hanger’s kit are a pair of high-quality spirit levels to ensure a plumb door that doesn’t open or close on its own.

The 32-in. model is for head jambs; the 78-in. version is for side jambs. Buying the two levels together costs 20% less than buying them separately.

Double Doors Are Twice as Tricky — Prehung doors demand galvanized nails, a good eye for gaps, and as little moving around as possible.

Cutting a Prehung Exterior Door — It’s probably easier to order a shorter-than-normal door through the lumberyard, but cutting down a door yourself also is an option. Here’s how.

Plumb Perfect Prehung Doors — Believe it or not, you need the level only once, and that’s before you ever touch the door.

How to Lay Out a Lockset on a Door — Replacing an old door slab with a new one may require laying out the lockset so it will line up with the strike plate on the existing jamb.