Install hinged patio doors so that they work perfectly, even in an out-of-plumb wall.

When installing a new door in an old wall, it’s rare for that wall to be perfectly plumb, level, and square. In this article, remodeling contractor Mike Sloggatt provides a detailed account of the steps he took to install new French patio doors in Fine Homebuilding‘s Project House. He begins by discussing the three options for installing a door in an out-of-plumb wall. The first is to hang it to match the wall. This is a viable method if the distance the wall is out of plumb is 3/8 in. or less over 8 ft.; otherwise, the door may develop phantom swing, which is when the door swings open or shut on its own. The second option is to hang the door plumb, which will work if the door is within 1/4 in. of plumb but will present problems for trim and siding if it’s greater than that. The third option is to hang the door almost plumb–essentially a combination of the first two options. This is the method Sloggatt chose for the doors at the Project House. First, he prepped the opening, which involved checking it for plumb, level, and square and then using a sledgehammer to bring the wall closer to plumb. Second, he installed the pan after applying flexible flashing, then set the door in place. The final steps were positioning the door, checking the diagonals, fastening the door, strengthening the hinges, and installing the hardware. Sloggatt recommends two tools for installing doors, both of which he used on this project: an 8-in. suction cup for help in lifting doors, and a Pump Wedge, which holds a door in place with an adjustable amount of friction.

In the nearly 40 years that I’ve been remodeling old houses, I’ve rarely installed a new door in an existing wall that was perfectly plumb, level, and square. When I was asked to install new French patio doors in an out-of-plumb wall at Fine Homebuilding’s Project House, I knew that getting the doors to work well and look good would involve making some compromises and choosing the right approach among my three basic strategies for hanging doors in out-of-plumb walls.

OPTION 1: Hang It To Match The Wall

Perhaps the simplest way to hang a door in an out-of-plumb wall is to install the door itself out of plumb so that it matches the plane of the wall. For this method to work, though, the wall can’t be out of plumb by more than 3⁄8 in. over an 8-ft. span, or the door will almost certainly swing on its own, a condition that I call phantom swing (sidebar p. 45).

Some carpenters bend hinge pins slightly to correct a door plagued with phantom swing, but that’s not possible with the adjustable hinges that are found on high-quality patio doors. These hinges are a great feature on many modern doors, and they simplify the process of making adjustments, including later adjustments made necessary by structural settling.

If you or your client can tolerate a phantom swing on a seldom-used door, hanging the door to match the wall plane often looks best. It also makes the door easier to trim because the casing and extension jambs will be at consistent dimensions without rabbets or tapers that compensate for the out-of-plumb condition.

Another strategy is to install the door perfectly plumb. This option makes sense for regularly used doors where it would be annoying to have a door open or close on its own. Unfortunately with this

approach, siding and trim may not look as good as they do on a door that matches the plane of the wall exactly. You’ll also have to spend extra time modifying the casing and/or making tapered extension jambs so that you can integrate the new door with its surrounding wall. This method works best for regularly used doors when the opening is within 1⁄4 in. of plumb over a span of 8 ft.

The last method is a combination of the other two. Install the door so that it’s close to plumb, but not quite perfect. Ideally, the door won’t have a phantom swing, and the trim and siding will be easier to install because you’re not correcting for the entire amount the wall deviates from true plumb. If the wall is out of plumb by 3⁄4 in. or more, this strategy is often the best option because the out-of-plumb door helps to hide the wall’s out-of-plumb condition.

If the wall is really bad (1 in. or more over 8 ft.), you or the homeowner will have to decide if aesthetics or function is the greater concern. If a phantom swing is tolerable, you can make the installation look better by hanging the door a greater amount out of plumb so that the trim is closer to a consistent width. A trial installation will help you to decide how much force behind a phantom swing is acceptable. Some phantom swings are gentle, and some slam the door with enough force to rattle the china. If it’s more important for the door to stay in any position without a phantom swing, you’ll have to adjust the trim accordingly, which might not look as good.

This Case Called For A Combination Of Tricks

Because this particular wall was out of plumb about 5⁄8 in. from top to bottom, I used a modification of the third method. I began with a few well-placed sledgehammer blows to the bottoms of the jack studs, which got me in the ballpark for splitting the difference

between plumb and perfect trim installation. The sledgehammer blows didn’t straighten the wall entirely; it stopped moving easily after about 5⁄16 in., and I wasn’t prepared to rebuild the whole wall.

The amount out of plumb a door will tolerate without a phantom swing varies from door to door. Because there are no hard-and-fast rules, you may discover that you have to make adjustments after the door is screwed in place. It might seem obvious, but you’ll want to check the door’s operation before you apply caulk and air-seal with spray foam. Making adjustments is much tougher when you have to dig out foam first.

When I checked the door after it was screwed in place, I found that it had a consistent phantom swing, so it had to be fixed, even if it meant fussing with back-cut casing or tapered extension jambs later.

To make adjustments after checking for proper operation, I first close both panels and then activate the head and foot bolts or multipoint latch to keep the doors properly aligned in their frame. After I removed the jamb screws, pulled out the top of the doors slightly, and checked the reveals on the inside to be sure I hadn’t made the doors cross-legged, I refastened the doors. The half hour spent fixing the phantom swing was well worth the effort. Once you get the doors to work, it’s just a matter of fine-tuning the adjustable hinges for the smoothest possible operation and consistent reveals between the doors and the jambs on all sides.

To make adjustments and the initial hanging easier, I use a pair of inflatable Pump Wedges (more commonly used by automotive locksmiths; visit pro-lok.com for more information). These devices hold the door in the opening while I loosen the screws. I also use them to move the doors precisely within the opening.

The rest of this French-door installation was pretty typical. Before installing the door in the opening, I put down a manufactured sill pan with peel-and-stick flashing underneath to stop airflow through the tongue-and-groove subfloor. I caulked under the sill pan, under the door, and behind the installation flanges.

When the door was secure and operational, I air-sealed with low-expansion foam and flashed around the door with flexible flashing. I included an aluminum drip cap above the head casing even though it was only inches below the roof overhang. Other carpenters sometimes harass me when they see me flashing things that they think will never get wet. They usually pipe down, though, when I remind them about tornadoes, tropical storms, and pressure washers.

Install Hinged Patio Doors So That They Work Perfectly, Even In An Out-Of-Plumb Wall

Prep The Pan, Then Set The Door

What Is Phantom Swing? 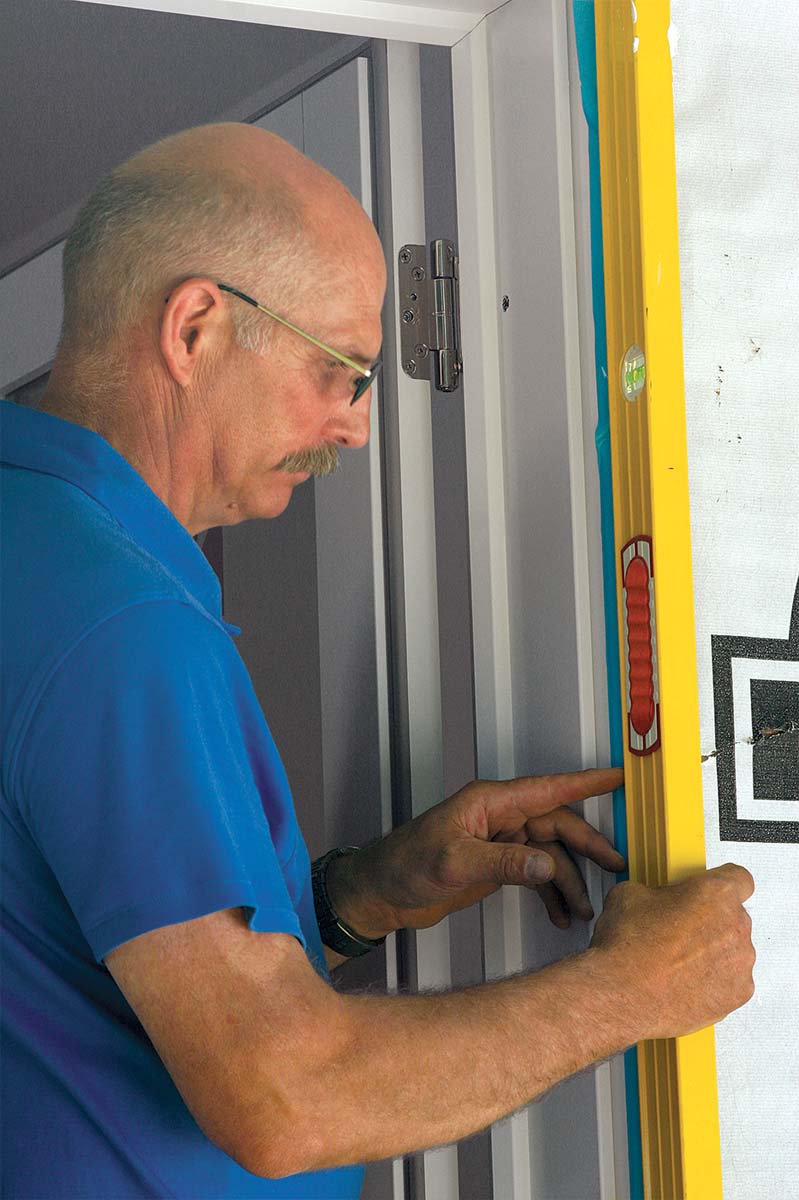 A door installed to match an out-of-plumb wall often swings on its own. Bringing the door closer to plumb solves the problem, but it complicates siding and trim. The author originally installed this door out of plumb (5⁄16 in.) to match the house and simplify trim, but he ultimately moved it closer to plumb to eliminate its phantom swing. In general, when the top of an in-swing door leans toward the living space, the door will move toward the middle of its swing. When the top of an in-swing door leans outward, the door will close on its own. The reverse occurs with out-swing doors.

View PDF
Previous: A Fast, Foolproof Method for Fitting Doors Next: New Sliders in a Day