How to Installing a Lockset in a Door

The keys to a successful installation are careful layout and sharp tools. 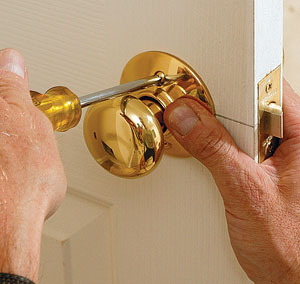 Unlike old-fashioned and complicated mortise locks, most of the locksets you see these days are of the cylindrical variety and are fairly easy to install. Basically, installation requires a large hole drilled through the face of the door and a smaller hole drilled through the edge. After the holes are drilled, the most difficult part of the job is cutting the mortises for the strike and latch plates.

There are two keys to a successful installation: careful layout and sharp tools. In addition to a tape measure, a combination square, and a hammer, you’ll need a scratch awl, a 21/8-in. hole saw, a 15/16-in. spade bit, and a 1-in. chisel. Assembling the lockset varies slightly from brand to brand, so it’s important to read the manufacturer’s instructions.

Steady the door,then drill the large and small holes 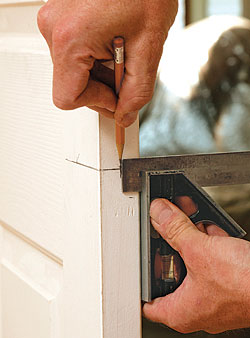 Step 1: Use a combination square for layout. Most lockset packages include a paper template for locating the face and the edge bore. It’s easier and more accurate to use a combination square, especially if you’ve got more than one lockset to install. Begin the job by wedging the door halfway open with a couple of shims under the bottom edge. Mark the face on both sides, 2 3/8 in. from the leading edge of the door (2 3/4 in. for exterior doors) and typically 36 in. from the floor. The edge bore is marked at the center of the door, in line with the face marks.

Step 2: Pilot holes pave the way for the big bits. To make sure the holes for the cylinders start in the right place and don’t wander, use a scratch awl to punch the precise starting points. Then drill pilot holes with a 1/8-in. bit in the edge and in both faces of the door. 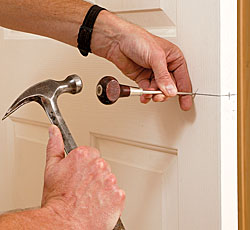 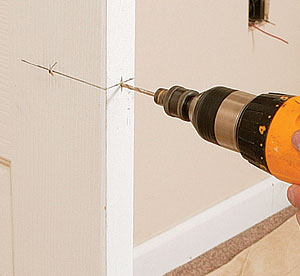 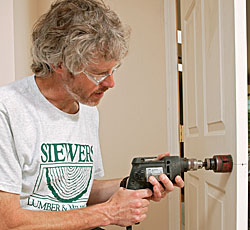 Step 3: Drill the face bore first. Holding the tool level and square to the door, drill halfway through one side with a 21/8-in. hole saw. Then complete the bore from the other side of the door. 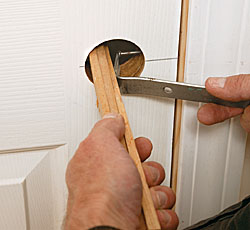 Step 4: Use a nail to mark the center of the strikeplate hole. Close the door and hold it tight to the stop, then push a 6d nail through the 1/8-in. pilot hole in the door edge until it pierces the door jamb; a pry bar provides leverage if necessary. 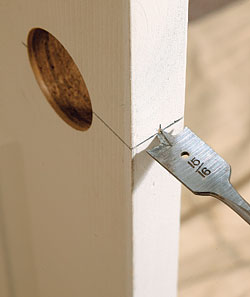 Step 5: Drill holes for the latch and the strike using a 15/16-in. spade bit. (A 7/8-in. bit is too small for most latch mechanisms, and the hole left by a 1-in. bit won’t be covered completely by the latch plate.)

A jig for foolproof hole alignment 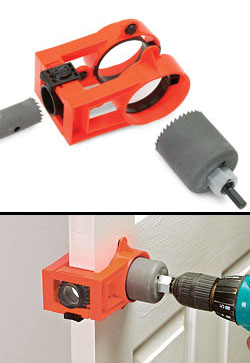 Carpenters who install door hardware for a living use commercial boring jigs that get the job done quickly and accurately. You can buy a light-duty version of the $250 jig for about $15.
Made by Black & Decker (www.blackanddecker.com), this plastic jig clamps onto a door edge and aligns the face and edge holes automatically. Two hole saws (21/8 in. and 1 in. dia.) and a common mandrel are included in the kit. The jig will handle both 2 3/8-in. and 2 3/4-in. backsets.

Step 6: Use the latch as a template. After drilling the edge bore, insert the latch mechanism and secure it with the screws provided; then trace around the edges with a sharp utility knife. Be especially careful when cutting vertically along the grain because the knife may wander. Some carpenters prefer to use a scratch awl to cut along the grain. 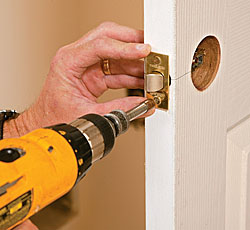 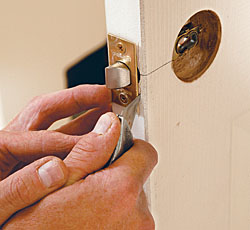 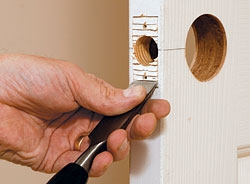 Step 7: Take your time with the chisel. Hold a sharp chisel at about a 45° angle to the work, and score the face of the mortise by gently tapping the chisel with a hammer; cut across the grain in increments of 1/8 in. or so. Now carve away the waste, working the chisel toward the center. Check the fit of the latch plate; it should lie flush with the door surface. If you end up carving too deep, cut a piece of cardboard to shim the latch plate flush with the edge of the door. 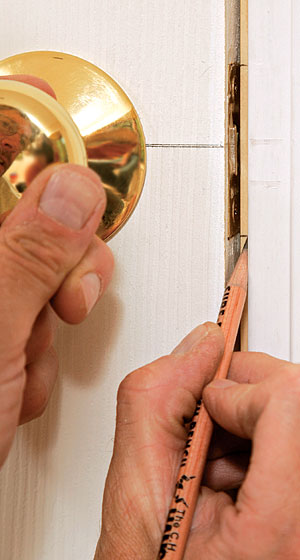 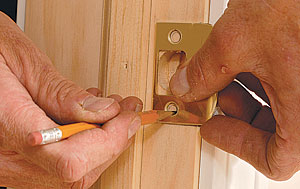 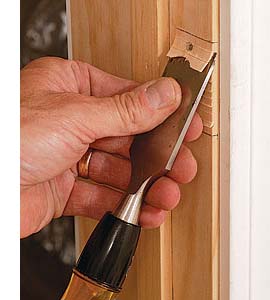 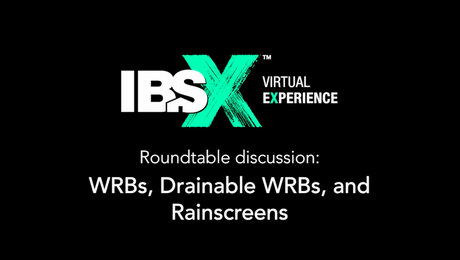 Fine Homebuilding hosts a panel of building pros in a discussion of the various types of high-quality substrates that can be installed under siding to make a wall assembly more durable.