Learn how to choose the right door locks for your home.

Here are some surprising facts about home break ins: Most burglaries happen during the day when it’s light outside, but homes tend to be empty. Often burglars come through unlocked doors and many enter the house right through the front door. And burglars prefer not to break into homes with home security systems.

So, you can get a home security system, or at least get a sign that says the home is protected by a security system. But also, make sure that you have good-quality, working locks on your entry doors, and use them. This article will help you choose between dead bolt and rim lock systems, both of which can be added to an existing door. In fact, marking and drilling for a dead bolt isn’t that much difference than installing a lockset.

You need more than a doorknob

Doorknob assemblies for exterior doors include a lock that provides a minimal amount of protection against unauthorized entry. This lock will prevent a lazy thief from entering a home, but a more determined intruder will find that it’s not much of a deterrent. As a result, add-on door locks are standard for homes in all types of neighborhoods. Although locks operated by a number pad are becoming more common, traditional keyed locks still dominate the market.

When shopping for a lock, be sure to check its ANSI rating. After undergoing operational and security tests, locks are graded 1 to 3, with 1 being the most secure. Most locks at home centers are graded 2 and 3, so if you want the best protection, you may need to look elsewhere.

Unlike the common dead latch that is part of the knob assembly, a tubular dead bolt is not spring-loaded and is not beveled. For the door to open, the dead bolt must be fully retracted. If installed properly, a dead bolt also extends much farther beyond the strike plate than a dead latch; at least 1 in. is best. The farther the dead bolt extends into the doorframe, the harder it will be for someone to force the door open. 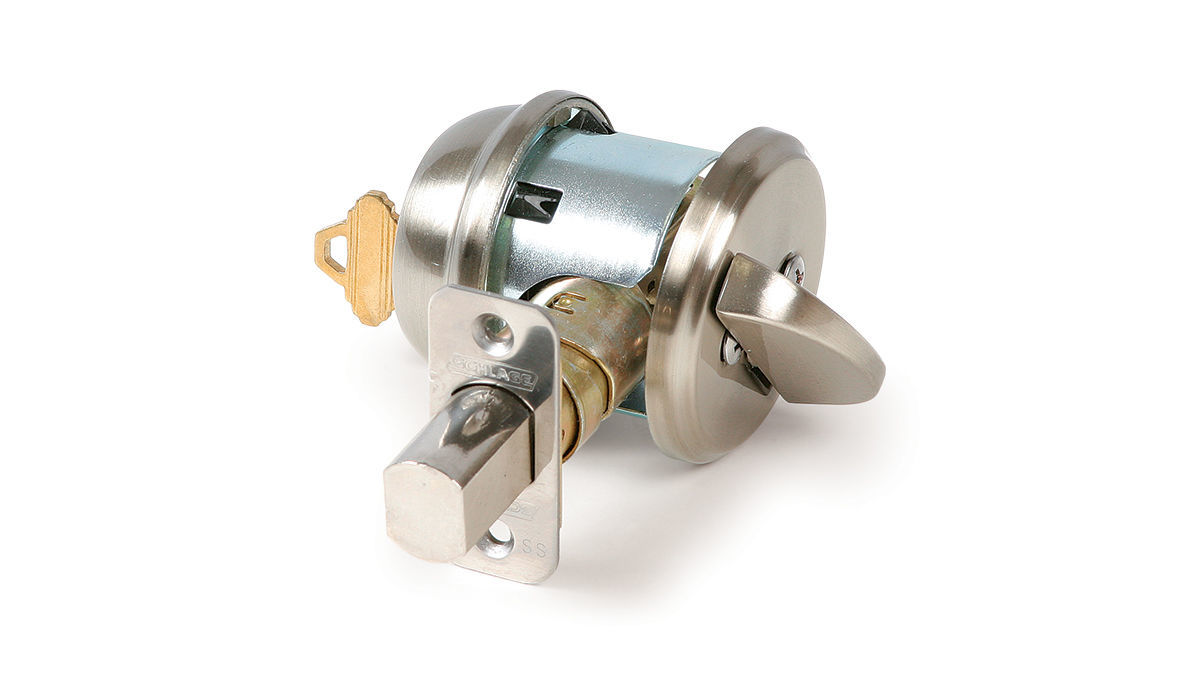 With a single-cylinder dead bolt, turning a key on the exterior side of the door moves a tubular bolt through the strike plate and into the doorframe. The same is accomplished on the interior side by a twist knob. If a window is close to the strike side of the door or if the door itself has a window, however, a thief can break the window, reach in, and twist the knob to unlock the door. If no windows are nearby, a single-cylinder dead bolt is the way to go. 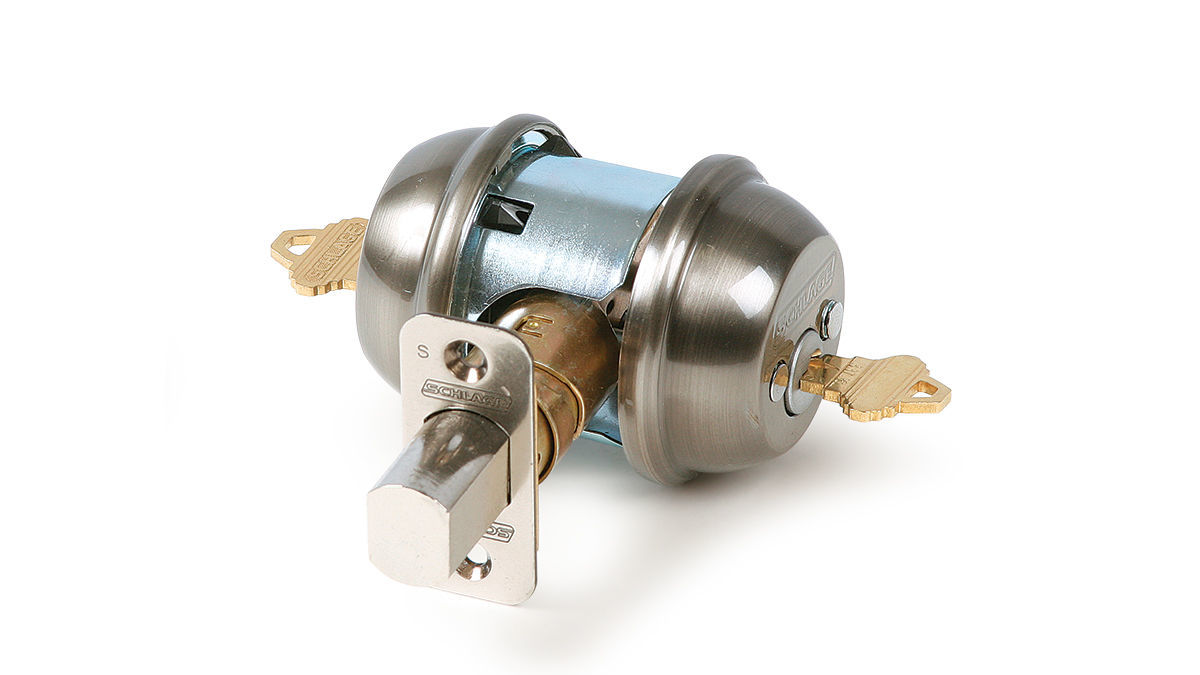 If a window is present, you may want to consider a double-cylinder dead bolt, which is operated on both sides by keys. A thief who breaks the window can’t reach in and twist a knob to unlock the door. Of course, if the home’s occupant has left the key in the lock— not unusual, given the nuisance that losing the key would create—the thief can simply reach in and turn the key. Because of this, keep the key in the lock only when you’re home. Even better is to hang it in a nearby location out of a thief’s reach. 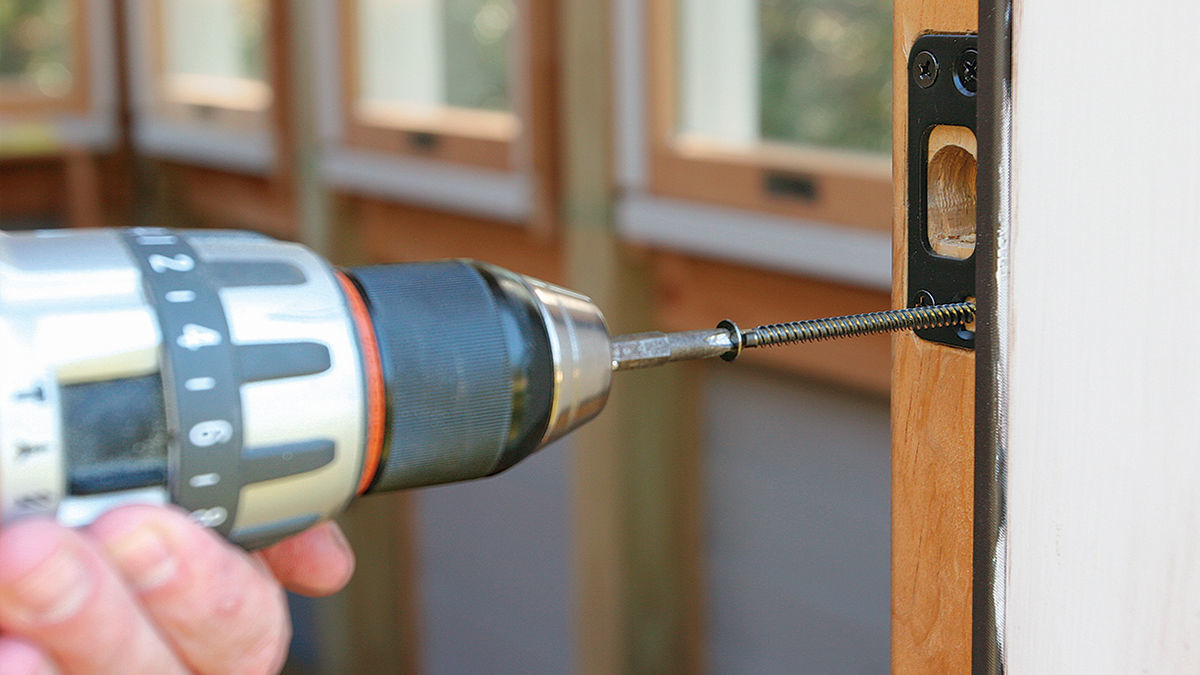 You can beef up the security of your grade-2 or grade-3 dead bolt with three simple enhancements to the strike: 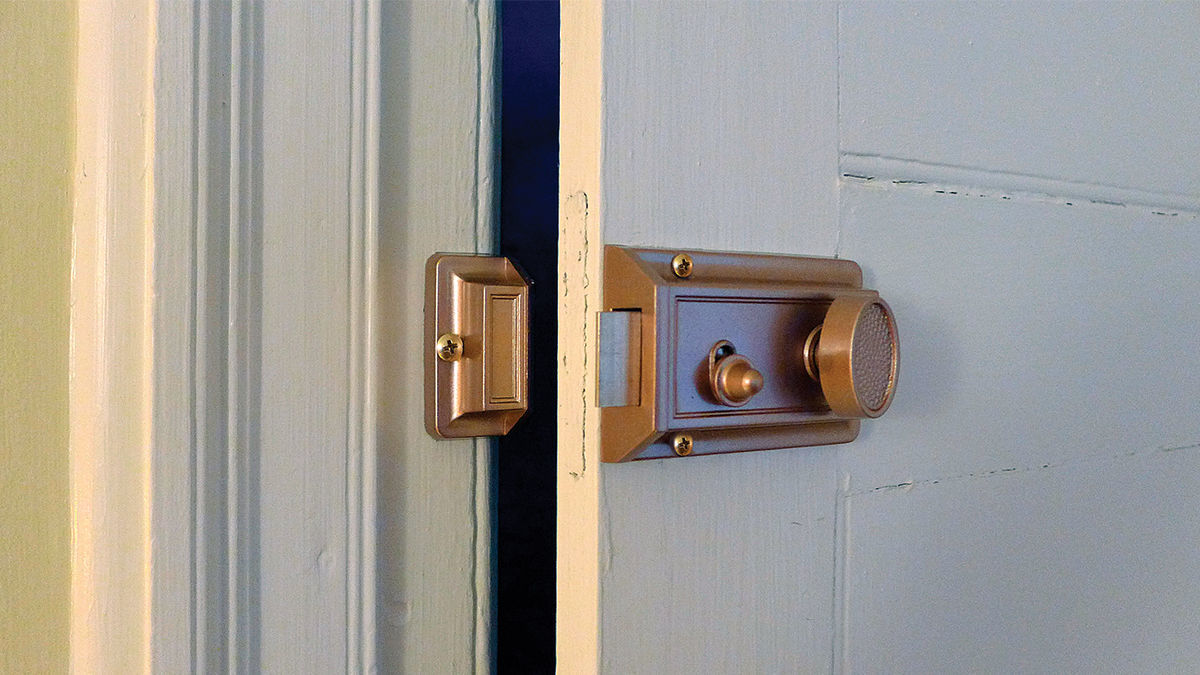 Rim locks are surface-mounted to the inside of a door, with a cylinder that goes through the door and allows the lock to be operated by key from the outside. Unlike a tubular dead bolt, which requires drilling two holes and cutting out two mortises, a rim lock requires only one hole and perhaps a mortise. 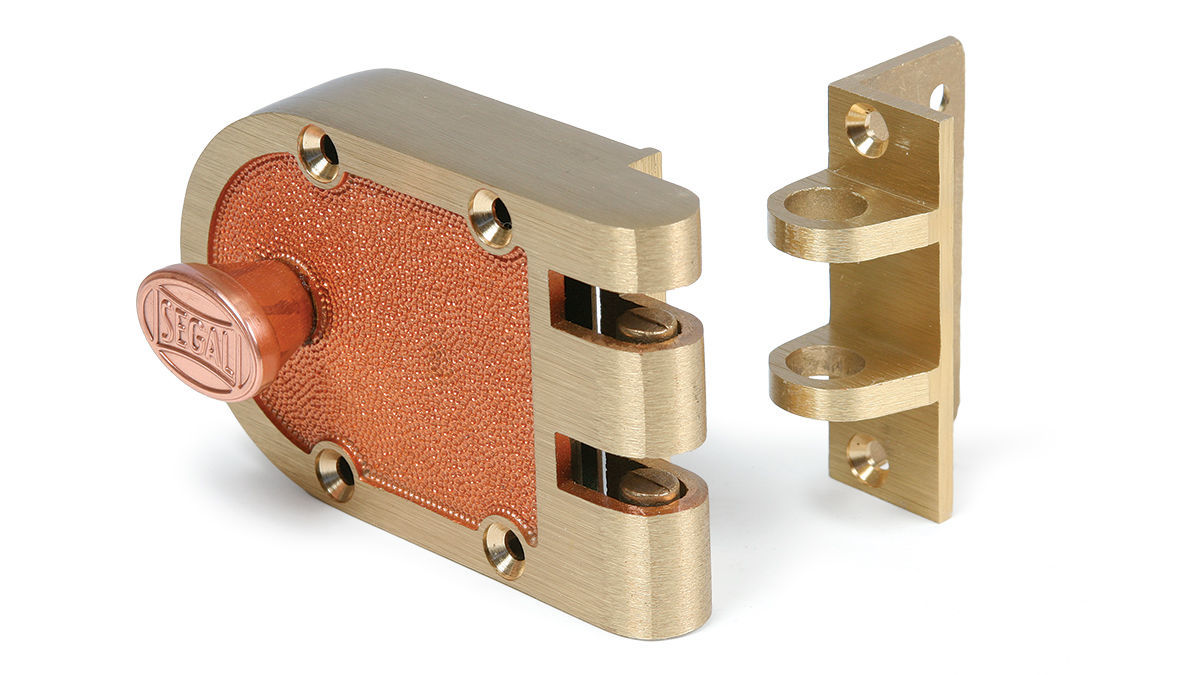 This type of lock is sometimes referred to generically as a Segal lock, after the company that introduced it. Designed to provide extra security for apartments in New York City, it’s still the most common add-on lock found there, although it can be used on houses as well. The lock’s position on the surface of the door gives it natural resistance to jimmying. A jimmy proof lock is operated by a key or knob that controls a two-part vertical bolt. The lock is engaged when the bolt descends or ascends into two rings on the strike. These locks can be installed with either a flat strike that is surface-mounted to the door casing or an angled strike mortised into the casing and the door jamb. Because it’s secured on two sides, the angled strike provides greater holding power and greater resistance to excessive force used on the door itself. Jimmyproof dead bolts are available in both single-cylinder and double-cylinder models. 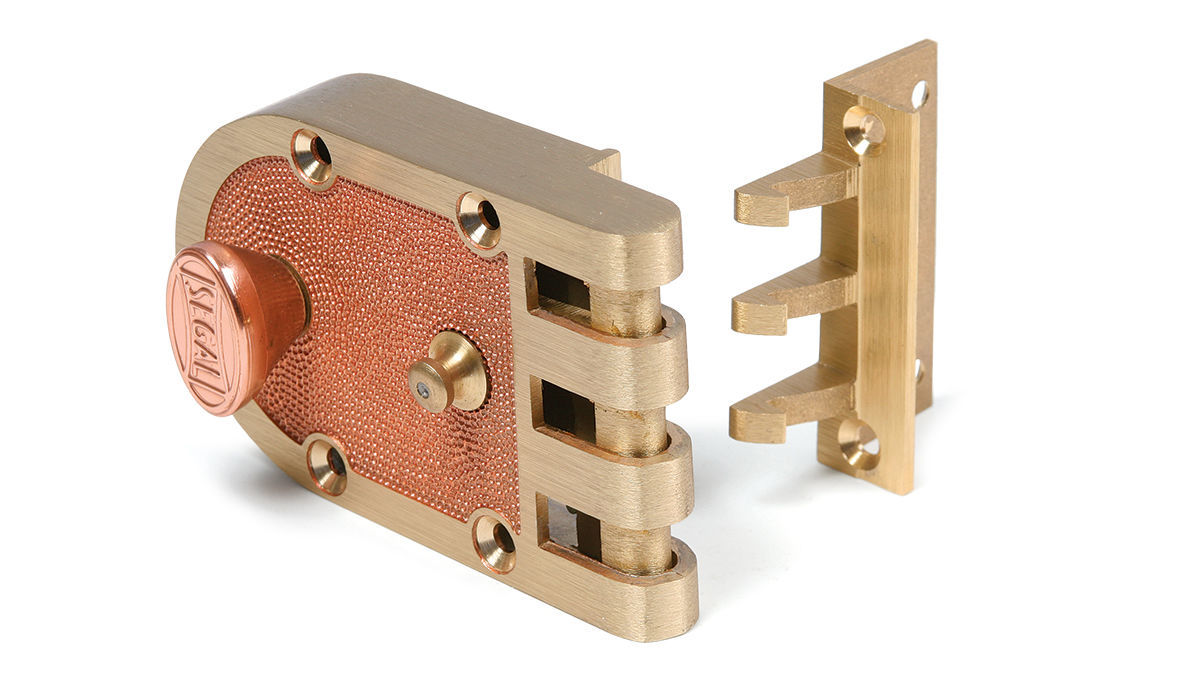 The slam lock is essentially a jimmyproof lock that engages automatically when the door is shut. Rather than a vertical bolt, however, it has a spring-loaded crossbar that engages with three hooks on the strike plate. Turning the large knob to the unlocked position and pushing in the smaller knob disables the lock by keeping the crossbar in the open position. 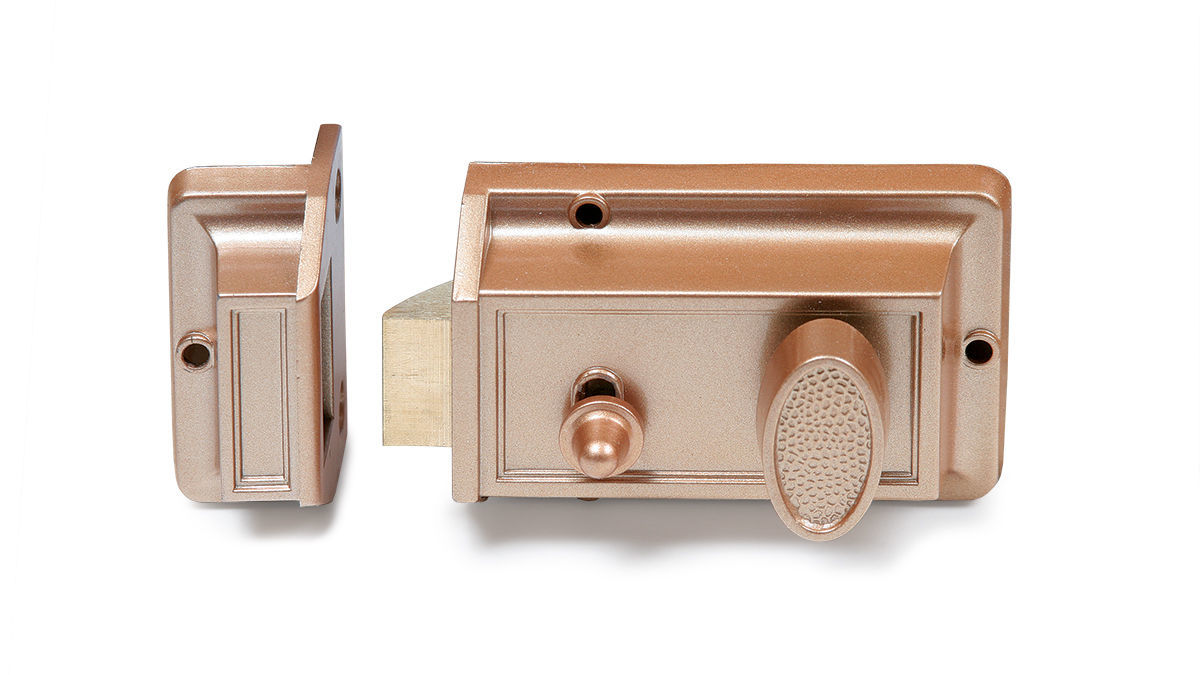 The night latch has a spring-loaded beveled bolt that allows the lock to engage when the door is pushed shut. Many night latches have a button that essentially changes them into dead bolts. When this button is pushed up or down, the night latch cannot be unlocked from the outside. The night latch has an angled strike that is secured on two sides and that requires a mortise in the jamb.

The outer design of the rim dead bolt resembles that of the night latch, but the locking mechanism is simpler: a nonbeveled dead bolt that locks or unlocks only with the turn of a knob or a key.

Previous: Prep Doors for Knobs and Dead Bolts Next: How to Install a Lockset in a Door