Synopsis: This article is an introduction to a new class of window and door flashing that is applied as a liquid instead of a tape. Product details from several manufacturers of these liquid-applied flashings are included.

By now, conscientious builders know that window and door openings need to be flashed carefully to keep out water. For residential builders, the most common way to flash openings is with peel-and-stick membrane.

However, a growing number of builders are looking at liquid-applied flashings (LAFs). Common in commercial construction, LAFs haven’t been seen much in residential work. Their advertised advantages—a small learning curve and fast installation—seem to warrant a closer look. LAFs come in various forms from eight different manufacturers. (Two others, Dryvit and Vapro Shield, make LAFs but require them to be used only as part of a proprietary WRB system. A third, Dow Corning, says that its product “isn’t designed for use in single-family residential construction.”) Some products are dispensed from cartridges like caulk; others come in a pail and have the consistency of mayonnaise. 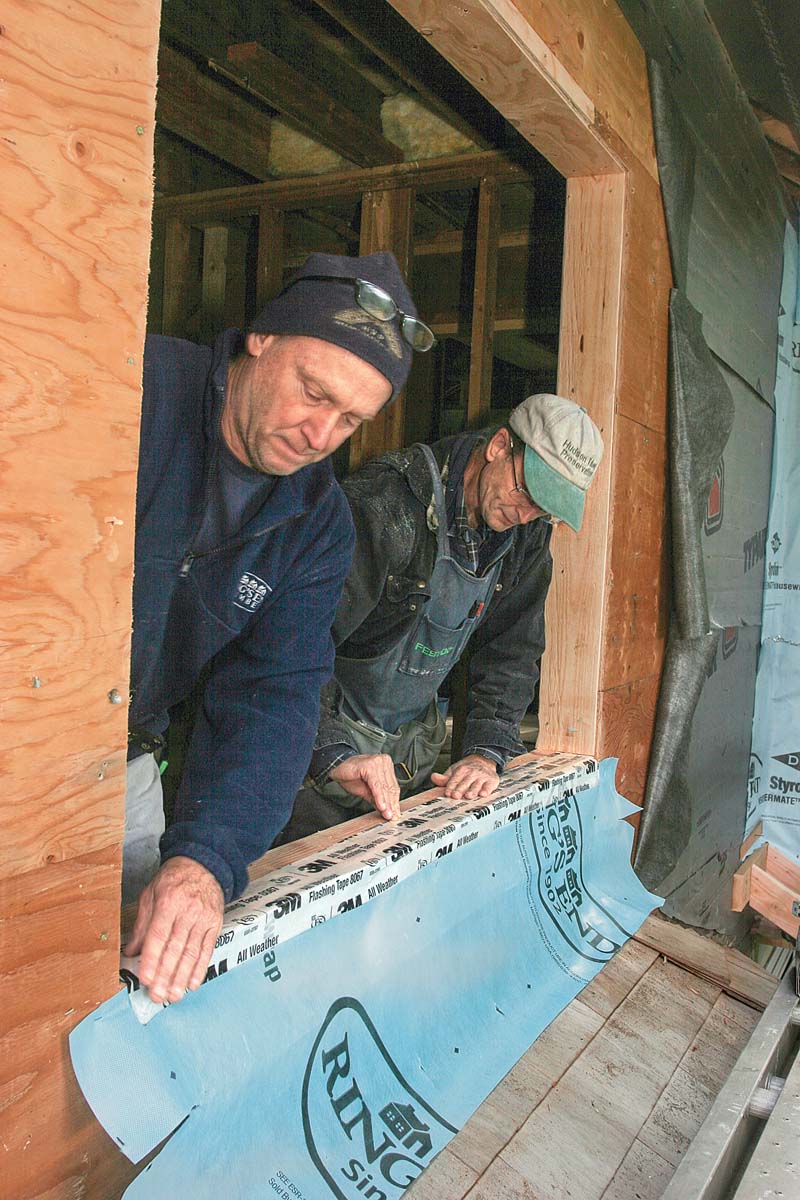 Once cured, they form a rubbery layer that manufacturers claim to be waterproof and airtight. Unlike most peel-and-stick flashings, most LAFs are vapor permeable; when used on the exterior side of wall sheathing, they won’t create a wrong-side vapor barrier.

Builders have discovered that liquid flashings work particularly well with inset windows. They don’t require any tricky origami at corners, and they avoid the problem of thick buildup caused by multiple layers of folded peel-and-stick.

To use an LAF, you squeeze or spread a generous amount on the surfaces that need flashing—generally the rough sill, the rough jambs, the head, and a 6-in.- to 8-in.-wide band of the sheathing around the opening—and then you spread the material out with a trowel or a plastic spreading tool. Some products have a thinner consistency and are brushed or rolled on (a few can be sprayed). Most manufacturers advise using enough material to make an opaque layer. LAFs can also be used to flash pipe and wire penetrations through wall sheathing. Application is easy and fast. If you make a mistake, just spread on a little more material.

LAFs have a few disadvantages for residential builders. For one, they may not be available at local building-supply stores. That may be because most of these products are marketed toward the commercial construction market and so aren’t readily found in residential distribution channels. Another problem is that most of these products are difficult to integrate with housewrap.

A 5-gal. pail of Dow LiquidArmor can be purchased on the web for $263 ($53 per gal.). Mike Stout of Protecto Wrap reports that retailers are charging between $35 and $50 per gal. for his company’s LWM200 LAF. That’s around $1 per sq. ft., similar in price to many peel-and-stick membranes. “It’s not really more expensive than using peel-and-stick flashing,” Stout claims. “On concrete block, you need a primer with any peel-and-stick. OSB also requires a primer, which adds material and labor cost. The advan­tage of a liquid is that it can be painted on by anybody. Tell the guy, ‘Cover it completely,’ and then just come back later and see if he did it right. You can always roll on some more. The savings come on the labor end.” 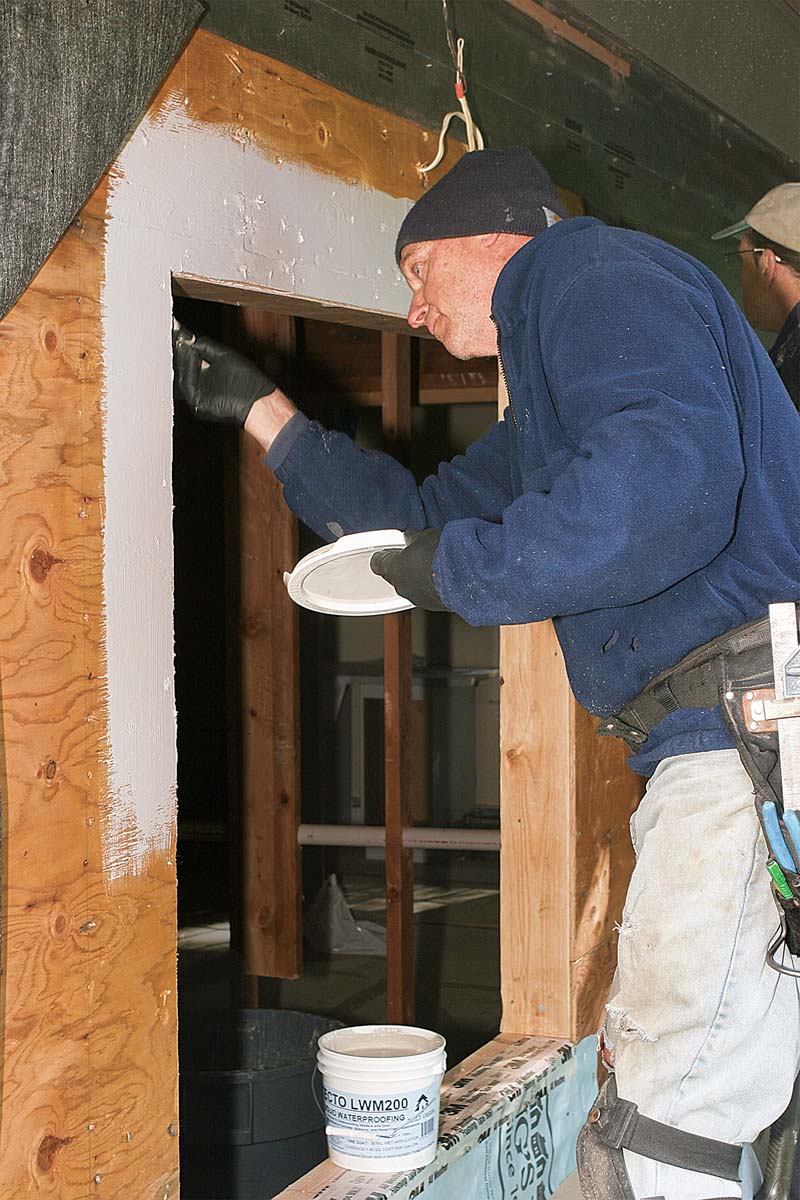 Some manufacturers of LAFs won’t stand behind their products unless they are used as part of a proprietary liquid-applied water-resistive barrier (WRB) system. When asked whether Dryvit’s LAF can be used with regular housewrap, Roland Serino, a representative for the company, told me, “We don’t actively market AquaFlash Liquid as a stand-alone product. The only warranties we have are for when it is used as part of our air-barrier system or EIFS [exterior insulation and finish system].” Kevin Nolan, a technical director at VaproShield, gave a similar response: “We do not recommend VaproLiqui-Flash for use except for part of the system.” I couldn’t get a clear ­answer regard­ing Henry Air-Bloc LF from the Henry Company representative. At the other end of the spectrum were ­DuPont, Huber Engineered Woods (maker of Zip System products), Pecora, Prosoco, Protecto Wrap, Sto, and W.R. Meadows.

Stout of Protecto Wrap says that his company’s LWM200 is “a stand-alone product,” meaning that it can be used with a variety of different WRBs. “We developed it for window and door applications,” he explains. “It’s especially good for recessed window openings or retrofit windows, or concrete-block walls with a wood buck.” Paul Grahovac, a Prosoco representantive, says that his company’s LAF, FastFlash, can be used with ordin­ary housewraps.

Russ Snow at W.R. Meadows says that his company’s product, Air-Shield Liquid Flashing, “could go with other systems.” I asked him whether there were any common building materials that this type of flashing is not compatible with. “Not that we have discovered so far,” he answered.

Some manufacturers insist that their flashings be protected from the weather after 30 days. By contrast, Zip System Liquid Flash can be exposed to the weather for up to six months. Protecto Wrap LWM200 and Prosoco FastFlash can be left exposed for up to a year.

Most products require some type of flexible flashing to make the transition from the LAF to the housewrap. DuPont’s James Katsaros says, “We like to use a transition membrane like a 4-in. peel-and-stick flashing tape [to connect housewrap to LAF] at the rough sill, because the housewrap and the fluid-applied flashing don’t form a stable interface.” Protecto Wrap’s Stout says, “For window rough openings, we recommend that you install one of our peel-and-stick flashing products on the sill. Then you can paint over the top with an LAF.”

Prosoco’s Paul Grahovac notes that transitioning from Tyvek to an LAF can be tricky: “You can’t put any of our products on Tyvek except AirDam [a sealant]. You spread the AirDam with a tool so that it’s like a coating.”

Because using an LAF with ordinary housewrap may require a transition sill flashing, choosing Zip System sheathing with its integral WRB might make sense. All you have to do is spread Zip System Liquid Flash in the rough openings and you’re done. 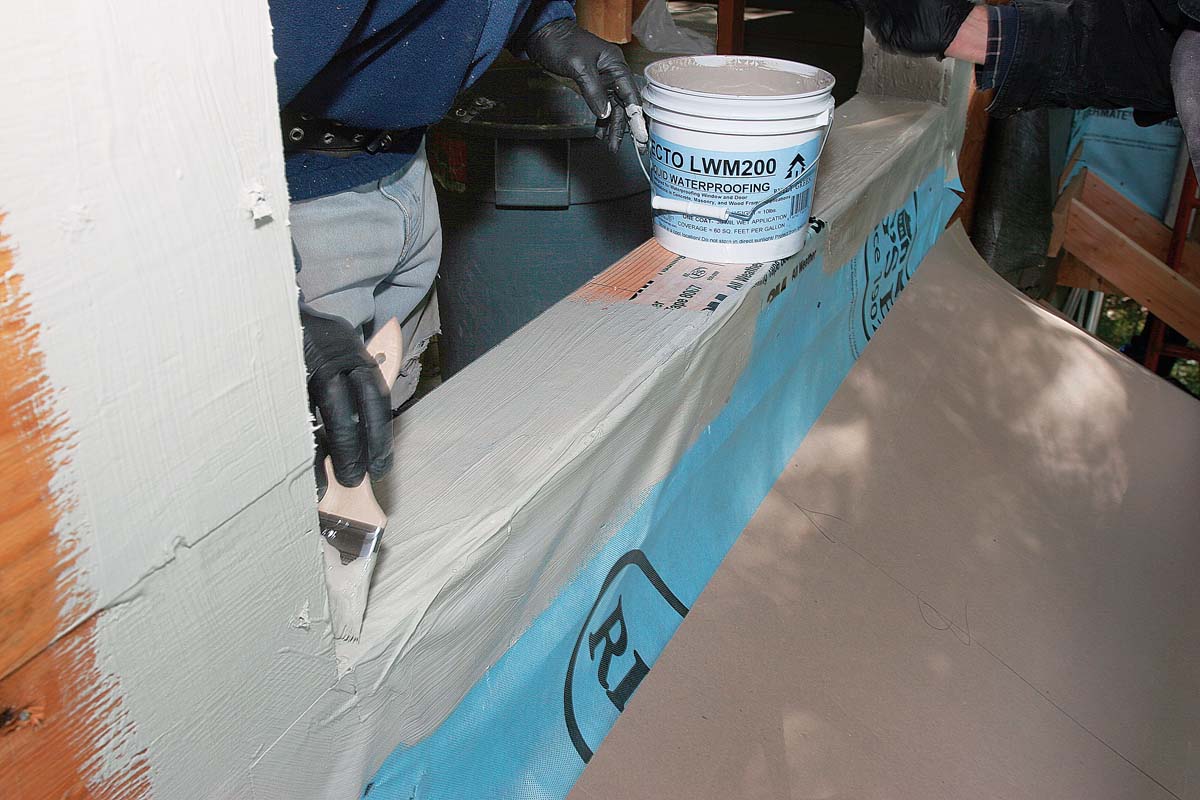 Most manufacturers recommend that LAFs be applied at 12 mils wet thickness, but some need to be applied at 20 mils or 30 mils. Read the label to determine how thick it should go on. Use a mil gauge if you have any doubts.

“It’s important to use the right amount, but I don’t think you screw it up by putting it on too thick,” Allen Sealock of Huber says. “As long as you get it on so that you achieve an opaque coverage, then you know you have the amount you need.”

Mike Murphy gives this advice to anyone who installs Pecora XL-Flash: “When you spread it, fill the peaks and valleys. Butter it on until nothing is protruding and there are no holes.”

LAFs can take a few minutes to an hour or more to dry tack free. Wet-setting windows or doors can be messy. Spreading LAF on all the openings and then returning to the first one to install the unit mitigates this problem.

I tested seven LAFs informally. None ­remained waterproof under a puddle of water on a horizontal surface similar to a rough window sill. That finding raises caution flags, but sloping the rough sills may be sufficient to avoid puddling. After early adopters share the results of a few years of job-site experience, residential builders will have a better idea of whether or not it’s time to abandon peel-and-stick flashing.

Liquid-Applied Flashings At A Glance

There are more LAFs on the market than are shown here, but only these have been approved by their manufacturer for use with regular housewraps. The others aren’t approved for residential use or are intended to be used only with the manufacturer’s proprietary WRB system, even though their chemistry is similar. 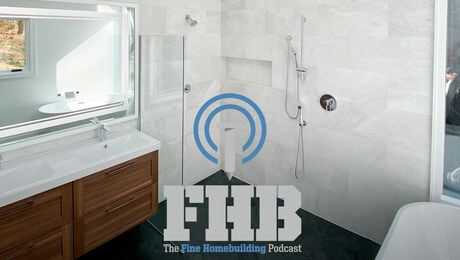