Here are the secrets to keeping this precision tool up and running.

The ease of application and huge yield from a single can of pro-style foam is reason enough to use a gun rather than a straw, but like many other carpenters, I’ve long been frustrated with the reliability of my foam guns. I’ve tried a lot of brands, and sometimes had them quit working after only a few weeks. But after several conversations with industry insiders, I learned that the problem wasn’t the gun—it was me. With a better understanding of how the gun works, and what can cause it to fail, I’ve learned the secrets to keeping this tool working well for years.

Moisture is the key

The first step is to understand foam chemistry. Canned foam has three main ingredients: polyurethane resin, propellant, and fire retardant. Some foams have additional ingredients for specific purposes, like capsaicin for pest control or dye to differentiate the color of, say, foam construction adhesives vs. foam for filling holes. No matter what type of foam you’re using, the chemistry behind how it works is the same.

The can keeps the propellant in a liquid state, but when you pull the gun’s trigger, the pressurized propellant is released as a gas, pushing the liquid polyurethane resin ahead of it. The propellant (usually propane or butane) has a boiling point of about -10°F at normal atmospheric pressure, so in a 60°F room, it’s 70° warmer than the propellant’s boiling point, which creates a vigorous boil that fully froths the foam. The closer you are to -10°F, the less vigorous the reaction. The can will yield less, and what does come out will be dense, less resilient foam than if you were in a warmer space. This is why foam makers suggest that if the can is cold, you should warm it at room temperature for at least 24 hours before use. If you’re in a rush, you can warm cold cans faster by placing them in a bucket of warm water.

Once it’s dispensed, the frothed foam immediately starts reacting with moisture in the air, which is necessary to make the resin cross-link and harden. Foam that is starved of moisture will look syrupy and dark brown, and will collapse after it’s dispensed. A lack of moisture is seldom a problem, except in arid regions and during extreme cold when outdoor air holds little water vapor, but the solution is easy: use a spray bottle to lightly mist the substrate with water before foaming and mist any large fills as you dispense the foam to ensure a full cure (see “You Don’t Know Foam,” FHB #241).

If you keep in mind that the foam will not cure without moisture, you’re well on your way to keeping your foam gun working for a long time. The idea is to keep moisture-filled air out of the gun. Otherwise, the polyurethane resin that remains in the barrel will start to cure, which will restrict the flow or stop it altogether.

Cans of foam have either a rubber or plastic valve that releases the foam and propellant. Because plastic expands and contracts less than rubber, cans with plastic valves create a more reliable connection between the gun and the can of foam, keeping out moisture. Leaky valves release propellant and allow moisture into the can, causing the foam to harden. These leaks can happen even when the can is on a store shelf. You can see if the foam is still good by giving it a shake before placing it on the gun. If the liquid resin feels thick or doesn’t move at all, or if the expiration date has passed, toss the can.

Don’t treat your foam gun like a caulk gun

If you store your foam gun in a crate with other tools, let it roll around on a shelf in your van, or shove it behind the seat of your truck between jobs, you should expect it to fail quickly. If you want this tool to last, think of it as a precision tool, with a delicate valve that must maintain the separation between air and polyurethane resin. You should always have a can of foam on the gun, even if it’s empty, because without a can you’re exposing the uncured foam within the gun to the moisture in the air. If the foam within the gun itself cures to the point that the trigger won’t move, the tool is toast. If the gun’s trigger moves, but it won’t dispense foam or dispenses slowly, it can often be revived with an acetone-based foam-gun cleaner.

To use, screw the cleaner onto the gun and spray the gun onto white paper within a cardboard box or trash can until the stream runs clear, which means the resin has been completely flushed from the gun’s system. You should keep cleaner use to a minimum, though, as it takes a toll on the foam gun’s internal seals, leading to the gun’s early demise. It’s also a good idea to keep the gun in a case. This helps to prevent the can from jostling on the gun during transport, which can create a leak where it screws into the adapter that allows air into the system. 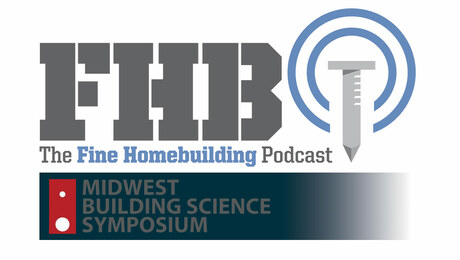 Patrick and Rob Wotzak head to the nation’s heartland to hear about what’s happening with high-performance building in the Midwest.