Waterproof Your Windows With Liquid Flashing

Learn how to install liquid-applied flashing to thoroughly seal a rough opening while also leaving a path for water to escape when it does get in.

Synopsis: Carpenter Steve Pink details his company’s method of applying liquid flashing to windows to stop water intrusion using Prosoco’s R-Guard system of Joint & Seam Filler, FastFlash, and AirDam. Through a series of photographs, he explains how to prep the rough openings, apply the liquid flashing, seal the transition, install the windows, and then seal the inside for an air- and watertight flashing system.

In 2010 when I joined Hammer & Hand, a well-established residential construction firm in Portland, Ore., building science was improving, both at the company and across the industry. In the rainy Northwest, water intrusion is a particular problem. According to the Oregon Contractor’s Reference Manual, the primary cause of defect claims and callbacks is moisture damage and mold due to the failure of the exterior envelope. While Hammer & Hand had fewer callbacks and claims than most, our former co-owner—and self-proclaimed building-science geek—Sam Haggerman, went looking for solutions. He heard about a liquid-applied window flashing developed by Building Envelope Innovations (BEI), an Oregon manufacturer, based on their findings that all windows eventually leak, and water will always get in. One of the inventors, Tom Schneider, cited a test conducted by Tatley Grund, a Northwest remodeling company that specializes in water intrusion. Prior to installing any new window, Tatley Grund gives the sill a simple test for watertightness: They tape over the weep holes and fill the sill track with water. If the water level drops at all, the window fails. Twenty percent of windows fail.

BEI brought their liquid-applied system to market, partnering with Prosoco, who dubbed the product FastFlash and made it part of their R-Guard system. Schneider pointed our bosses to independent tests performed after five and ten years on windows installed using the FastFlash system, which showed zero evidence of failed flashing.

I wasn’t convinced, but despite my skepticism, orders came down that it was time to “get into the goop.” And the bosses really could tell who had complied by the globs of pink and red goop on their boots, clothes, and hair.

Change your thinking about water

To understand how to use liquid-applied flashing, and why, you have to change your thinking about water. The old motto, “Think like a raindrop,” becomes, “Water is like a snake. Give it a place to go, and it will leave you alone.” We’re dealing with water management now, accepting that it will eventually get into the flashed opening. So the idea is to create a completely waterproof opening and an aquatic exit strategy. Everything about our approach to liquid-applied flashing follows that philosophy.

Eight years later, the griping and groaning has stopped and we’re better at keeping the goop out of our hair and clothes. Nitrile gloves take care of our hands. More importantly, we’ve installed hundreds of windows using this new flashing system, with zero callbacks for water intrusion. 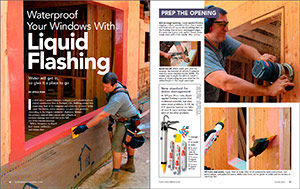 More about flashing and installing windows: 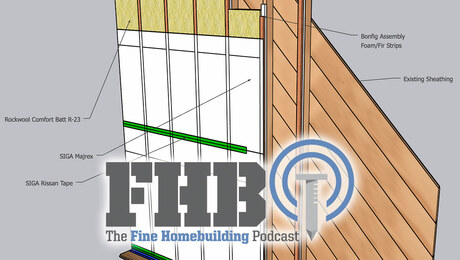 Matt, Brian, and Patrick hear from listeners about lead dangers and storm windows before taking questions about insulating a brick ranch with board sheathing, supporting a short section of countertop, and cleaning mossy roofs.