Synopsis: While job-site saws seem to be trending bigger and heavier, these smaller cordless miter saws have a lot to like about them—they’re easy to carry to the work site, deflect less than larger blades, and let you get right to work cord-free. Carpenter Ben Bogie tested eight compact saws for power and cut quality with cuts in 2x stock, plywood, poplar, and hardwood. Here, he gives a brief description of each tool and names his best-overall and best-value models.

Although the trend in the last 10 years seems to be increasingly bigger and heavier sliding miter saws, I started my career over 20 years ago learning on an 8-1/2-in. Hitachi, so returning to this size of saw feels familiar. There’s a lot to like about sliders this size. The small blades deflect less than larger blades, resulting in exceptional cuts, but the ability to easily carry the saw to the work site with one hand and get right to work cord-free is the real reason to get one. For this test, I limited our selections to 7-1/4-in. saws, assuming that this will be a super-­portable second saw to complement the larger miter saw you probably already have. I also included the 7-1/2-in. Makita because it seemed close enough.

If you’re used to a corded saw, you may assume these battery-powered versions are just for punch lists, but modern high-capacity batteries mean you can set up one of these saws up in the morning and cut a day’s worth of trim without ever tripping over a cord. I compared all the models, side by side, making cuts in 2x stock, 3/4-in. plywood, 5/4×6 poplar, and 1×9 hard maple. I quickly plunged the saws into 2x stock to evaluate their power and cut quality. I made crosscuts in wide maple to check for wandering cuts. The Achilles heel of sliders is play in the sawhead. Excessive play causes the blade to wander and creates a belly-shaped cut in wide pieces. At full extension, most of these saws had minimal head movement—I was surprised. The Craftsman and Kobalt had the most play, with the DeWalt, Milwaukee, Makita, and Metabo HPT having almost none. The others fell in between.

Out of the box, only three saws had their miter and bevel stops and pointers properly calibrated: the Metabo HPT, the Makita, and the DeWalt. I make it standard practice to check and calibrate a new saw, but it’s a nice feature to not have to. All of the saws have front miter locks and bevel locks in the back. Milwaukee has a miter-detent override, a nice feature when working close to a detent. The Kobalt makes you hold up the lock lever to pass detents, which I found awkward.

For bevel locks, the Makita and Metabo HPT have short-throw levers that are quick and effective. The Metabo HPT has a bevel-­adjust knob that allows you to dial in the exact setting. All of the saws have compact footprints compared to 10-in. and 12-in. miter saws, which is nice for portability, but also means there isn’t a lot of room to support stock. Makita and Metabo HPT include accessory wings that expand the saw table. The small footprints also mean that some of these saws couldn’t crosscut through the 8-3/4-in. maple. The Makita, Metabo HPT, and Kobalt have larger crosscut capacity.

Many of the saws feature a shadowline cut indicator, which I find to be superior to lasers as they’re crisp and don’t require eventual adjustment while also illuminating the cut zone in low-light conditions. Notably, the Ryobi and Makita feature neither a light nor a laser, which felt like a glaring omission. The Metabo HPT was the only one in the pack to use a laser, which is quite good, and also includes onboard lighting with two brightness settings.

As far as material quality, machining, and assembly, the Makita and Metabo HPT saws are very close, with a slight advantage to the Metabo HPT. The Ryobi and the Kobalt scored lowest in this area. For power and cut quality, it’s hands down Makita with Metabo HPT very close behind. Both of these saws feel more powerful than the others and absolutely plow through cuts with no noticeable hesitation or blade run-out.

The cut surfaces were smooth, square, and straight. The Ryobi was the least powerful-feeling while still delivering fair cut quality, and the Craftsman was adequately powered, but had a great deal of blade run-out, resulting in poor cut quality that I don’t think was a blade issue. An honorable mention goes to the Ridgid, as it’s well-powered, bevels in both directions, and makes decent cuts, even in hardwood.

And the winner is…

For me, it all comes down to quality of cut and precision of the adjustments. Overall, the Makita and Metabo HPT saws are the clear leaders. They are beautifully executed saws with excellent cut quality. I’ll gladly take either for the most demanding finish carpentry. But for me, the Metabo HPT takes the crown. It has excellent cut quality, great capacity, and dual-bevel capabilities, and was the only one with a bevel-adjustment knob. You can also run it with a 110v adapter. My only complaint is that I’d prefer a shadowline cut indicator instead of the laser.

The Makita saw is a close second; it has phenomenal cut quality and power, great capacity, and great build quality, but loses points for missing lighting and no cutline laser or shadow, and it’s only single bevel. Next would be the Milwaukee and DeWalt saws, which are perfectly adequate, but lack the refinement and precision of the Metabo HPT and Makita. The budget winner here for me is the Ridgid. It’s a good-quality tool with strong features and decent performance at a good price.

Note: For the specs listed here, we weighed all the saws and checked miter and bevel capacities ourselves. Battery offerings by manufacturer are varied and constantly changing—we’ve done our best to present a fitting comparison for each tool if a kit was not available for purchase.

Photos by Melinda Vazquez, except where noted. 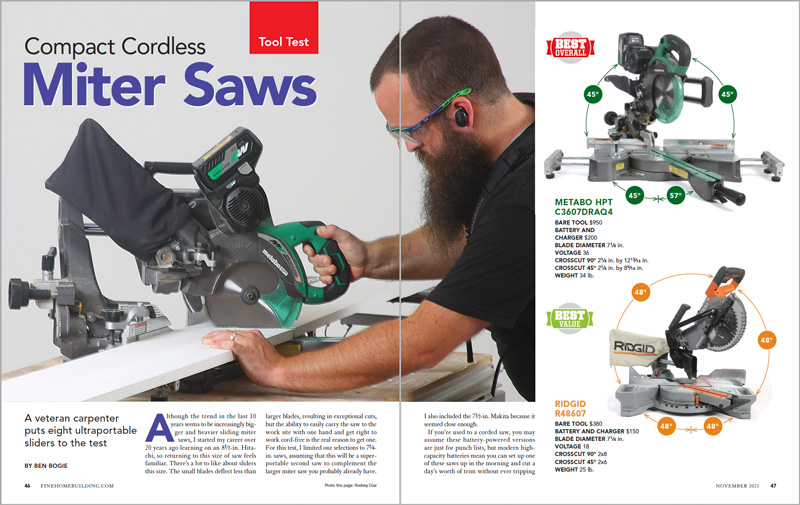 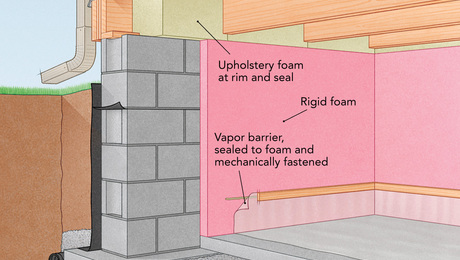