Bay windows have many benefits but also the potential for design mishaps; Marianne Cusato explains how to get bays right.

Bay windows not only add interest to the exterior of a home, they open the interiors to longer views, invite in more-expansive light, and enlarge living areas. They also introduce many potential design mishaps, from their roofs down to their foundations. And beyond the individual element, you need to keep in mind how a bay window works within your home’s overall composition.

When placing a bay window on the exterior of a home, first ask, does the composition stand on its own without it? Too often, designers add more and more design elements to conceal an unfocused and unresolved overall composition. If your eye keeps bouncing between shiny objects, it won’t linger on any one of them long enough to make an impact.

Bay windows had a rich heritage before being co-opted into the world of McMansions. Bays were often used on the sides and backs of houses, rather than on the front. So start by asking how the bay window impacts the interior.

While there are infinite variables for the depth, angle, and shape of a bay window, if you apply the rules of thumb outlined in this article, just about any combination of proportions will result in a great-looking bay window.

Two bay windows only further clutter the below (left) composition, where the two-story entry draws the eye upward to an unbalanced and awkward roof. On a well-balanced two-story home, a bay on the side of the house (below right) may be more appropriately placed for the effect it has on the interior, and the outside corner of the curved roof adds a subtle touch of detail to the front elevation.

Because the bay projects from the house, one of the first details to resolve is what happens under the window. Avoid designs that cut the bay off immediately under the window or cantilever without support. Many bay windows end up ungrounded because they are used to extend the interior of the home without the added cost of altering the foundation, or sometimes to avoid encroaching on a building setback. You can address the space below the bay in a few ways: add 2 in. to 3 in. of structure under the window, use brackets to visually support the bay, support the bay with a foundation, or use some combination of these techniques. 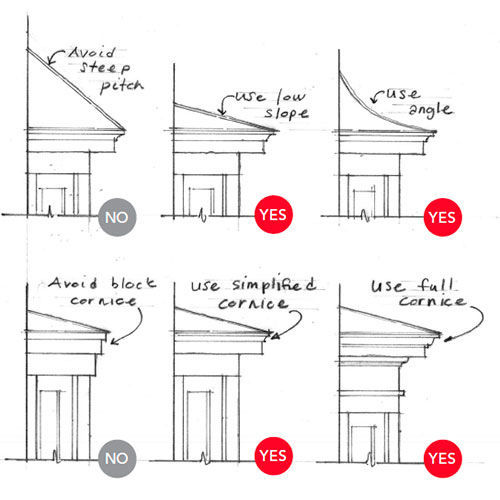 For the roof, less is more

The roof slope of your bay window does not need to match the roof slope of your home. Keep in mind that even in extreme climates, only a minimal amount of water will be hitting a bay that projects just a few feet from the building. A steep-pitch roof has too much surface for the relatively small mass of most bays. Rather, use a low-pitch roof, just enough to see. If you add a curve to the roof, it can then project higher onto the wall. The important consideration is the angle of the roof at the eave: if it is low, then the bay will feel like an element that stands on its own.

Eaves should have an overhang

When detailing the eave of your bay window, remember, again, that less is more. Like the roof, it does not need to match the eave on the rest of the house. Many bays do have full cornices, but these details can be expensive to get right, so feel free to simplify. Just remember that the eave should project beyond the window so that water doesn’t drip down the glass.

Many window manufacturers offer bay window assemblies, but as a general rule, avoid these options. Instead, purchase individual windows that you frame together. The issue with the preassemblies is the lack of structure connecting the windows. The joints between windows, the mullions, help to define the look of the bay. Use either 5/4×4 or 5/4×6 material for the mullions to give the visible structure enough weight to feel solid. While you are avoiding thin window connections, be careful not to overcompensate with mullions that are too heavy. A common misstep here is to carry the finish building material—siding or even brick—up between the windows. Avoid this detail. The bay window is its own element; it is not an extension of the exterior skin of the home, it’s an addition to the exterior skin. Let the bay window stand on its own.

Use the same rule of thumb for combining windows that you would for any ganged windows. The overall size of the window sash may vary, as long as the lite width stays the same. Don’t squish or stretch lite widths to fit in different-width windows.

Marianne Cusato is the author of Get Your House Right. Drawings by the author.