Custom sliding, swinging, and overhead doors reinforce a house's architectural style and invite the outdoors in.

As more people enjoy outdoor living at home, the openings between outdoor and indoor spaces have grown larger. Whether these openings are in a breezeway, a living space, or a garage, they require oversize doors that keep out the weather. Although designing them can be a challenge, large doors offer a chance to reinforce a house’s architectural style and have some fun.

Oversize doors can be a better, less busy, and more functional solution. Whether it’s a sliding, swinging, or overhead door, a custom door generously invites the outdoors in and the inside out. Composed with architectural  context in mind and with attention to proportion, even a garage door can enhance the elevation.

Generally, the sliding doors that you find in a house are either the double-track variety (closet doors or patio doors) or pocket doors that provide access to tight quarters, such as a powder room.

In this example, the operation, scale, and appearance of the oversize sliders are inspired by barn doors. Hanging from a single track, the sliding doors serve a three-season dining area bordering a deck. When fully open, the doors create an expansive opening where the inside borrows from the outside and vice versa.

The advantage of sliding doors is that they open unobtrusively without disrupting furniture arrangements on either side of the opening. Integrating the track into the building with a shingle flare adds depth and interest to the elevation and provides a sheltering visor for the door opening.

Below table height, the diagonal, V-groove, tongue-and-groove boards in a rail-and-stile frame are reminiscent of barn doors. Lites, which take their proportion and three-row pattern from the casement windows above, allow outdoor views.

An interior set of removable sliding screen panels that echo the rail-and-stile layout of the exterior doors can keep bugs at bay. If interior space doesn’t allow for slider-screen storage on either side of the opening, bifold interior screens or a pair of roll screens can be used in their place. Because they’re hung from a track, these doors are difficult to weatherseal, so they’re not ideal for year-round living space. You might want to install interior storm panels during winter. 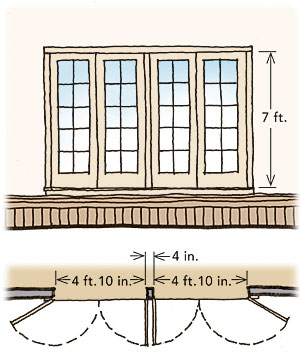 Common solution: The 10-ft. by 7-ft. opening requires two pairs of French doors or sliders, a busy look when the doors are closed. When they’re open, a central mullion clogs the entrance. 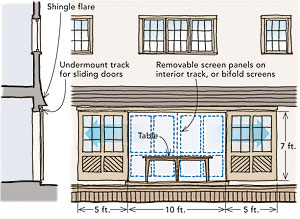 Better solution: An oversize door on a track creates a large, uncluttered open space, easing movement from indoors to out and providing an unobstructed view.

A covered patio provides shade and shelter beneath the roof, but it reduces the amount of daylight entering the interior living space. These oversize doors with hefty wood rails and stiles are designed with multiple glass lites to admit more natural light to compensate for the shading roof.

If more predictably designed, the 9-ft. by 7-ft. opening would require three French or folding doors, creating a cluttered effect that would cramp the opening. Instead, when these oversize swinging doors are thrown open, the large, unfettered opening allows the inside and outside to blur seamlessly.

Because these doors swing rather than slide, they’re easier to keep weathertight and are a good choice for year-round living space.

The curved lites atop the doors recall a similar design in old carriage doors and relate to the fine detail of the chamfer on the posts. The curves also soften the elevation and add a bit of whimsy. Strap hinges provide an authentic touch and an appealing accent. The doors’ four-lite pattern echoes that of the upper-level square awning window.

These doors can be paired with in-swing screen doors of a comparable style. If interior space is limited, they can be outfitted with bifold interior screens or a pair of roll screens. 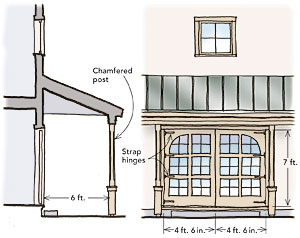 Garage doors are oversize by necessity. We typically think of them opening at the push of a button and, thanks to their sectional design, storing neatly overhead. All too frequently in the early years of suburban development, that convenience came with an aesthetic cost: monotonous expanses of endlessly repeated small panels.

With attention to proportion and a nod toward oversize doors of the past, the overall scale of garage doors can be mitigated. In this example, the garage-door width is divided into three 3-ft.-wide sections to reduce the scale of the 9-ft.-wide by 8-ft.-tall overhead door. The vertical V-groove, tongue-and-groove boards suggest a carriage-house door that slides around an interior corner or folds accordion-style to store at the side of the opening. 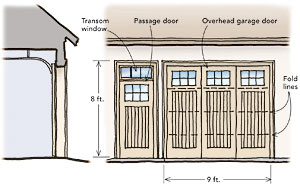