How to Install a New Door Jamb in an Old Doorway

Preinstall the trim and get the flashing details right to create a long-lasting, welcoming entrance to your home.

Synopsis: The entry door on your house welcomes guests and faces the world. When installed properly, it should last a long time. Builder Emanuel Silva describes his technique for installing an entry door so that it will last a long time and be able to avoid rot. Silva begins by building the door’s trim on the worktable, which gives him more control over the trim assembly. Next, he flashes the rough opening, a line of defense against water infiltration and decay. After preparing the door for installation, he hangs it, making sure to finish by adding a bit of spray-foam insulation between the door frame and the rough opening.

I’ve replaced dozens of rotten entry doors in my time as a carpenter. Unfortunately, most of those rotten doors never had a chance in the first place. In my opinion, the single largest cause of failing doors is improper installation and flashing.

Installing a door so that it’s airtight and sheds water is imperative. Over the years, I’ve adopted a system that makes door installation easier, more accurate, and extremely weathertight. On this particular project, rot was less of an issue than aesthetics. The homeowners simply wanted a better-looking door. However, it’s important to replace any material that shows even the slightest bit of rot before starting any of the sequences shown here. A solid substrate yields a flawless finished product.

Trim Out The New Door The Easy Way 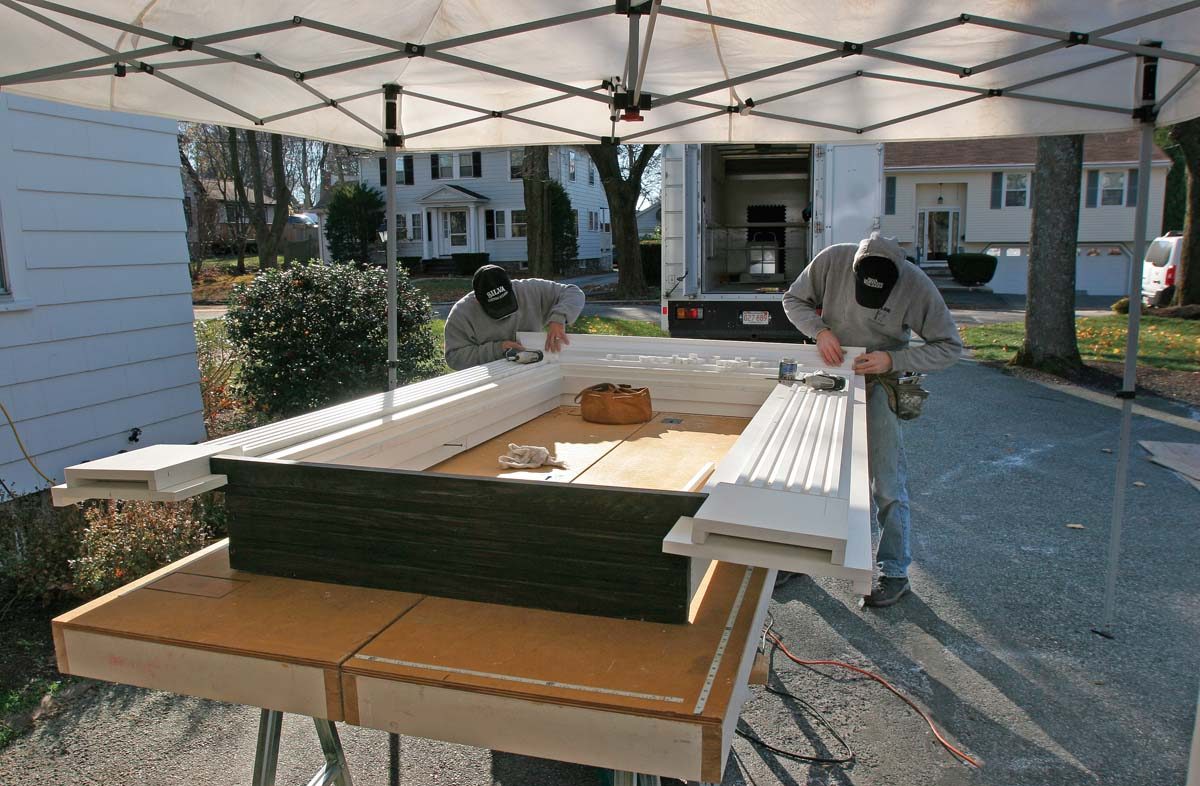 Perhaps the greatest advantage to this approach is that you can trim the new door before you remove the old door. I find it easier and faster to attach trim — especially intricate dentil-molding details — when the door is flat on a worktable. I use PVC when trimming out exterior doors. PVC won’t split, crack, or rot over time, and it never has to be painted. I’ve tried several brands of PVC trim and have found Kleer (www.kleerlumber.com) to be the most pleasing to work with. 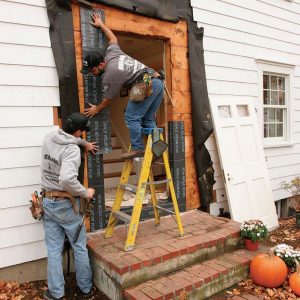 Flashing the rough opening is the third line of defense against water infiltration. (Trim is the first, and back-flashing is the second.) Done correctly, the flashing protects the house’s framing from water and rot. Failing to flash the rough opening correctly can trap water in the assembly and damage framing members and door parts. 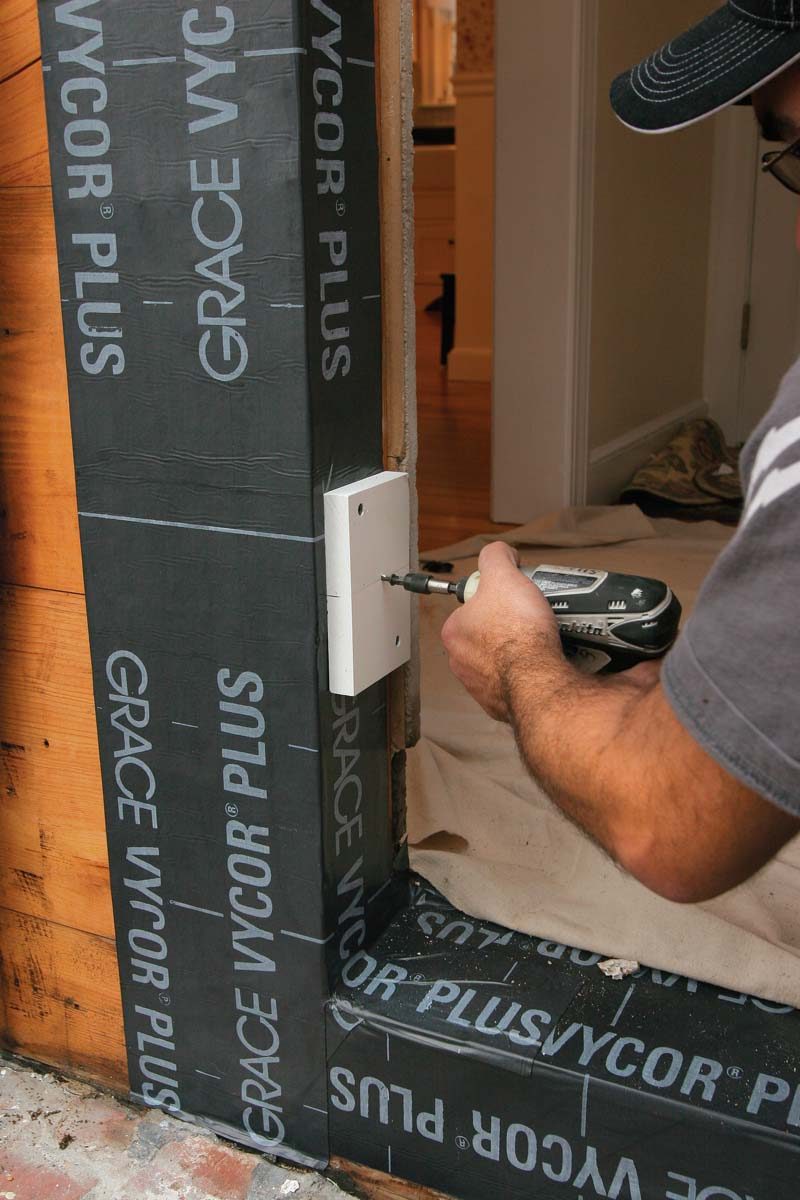 Typically, a door is put in place before wood shims are added between the door frame and the framing. Because the trim is already applied to the door frame on this project, I can’t add shims from the front. Instead, I use screws as standoffs to plumb the jambs. There are a few benefits to this approach. First, plumbing screws before the door is installed ensures that the frame will be dead plumb. Second, it’s faster to plumb screws than to fuss over wood shims. Finally, screws allow water to drain should it find its way into the rough opening. On this project, the rough opening was much wider than the door frame, so I padded with PVC blocking. If your opening is narrower, simply sink the screws into the jack stud. 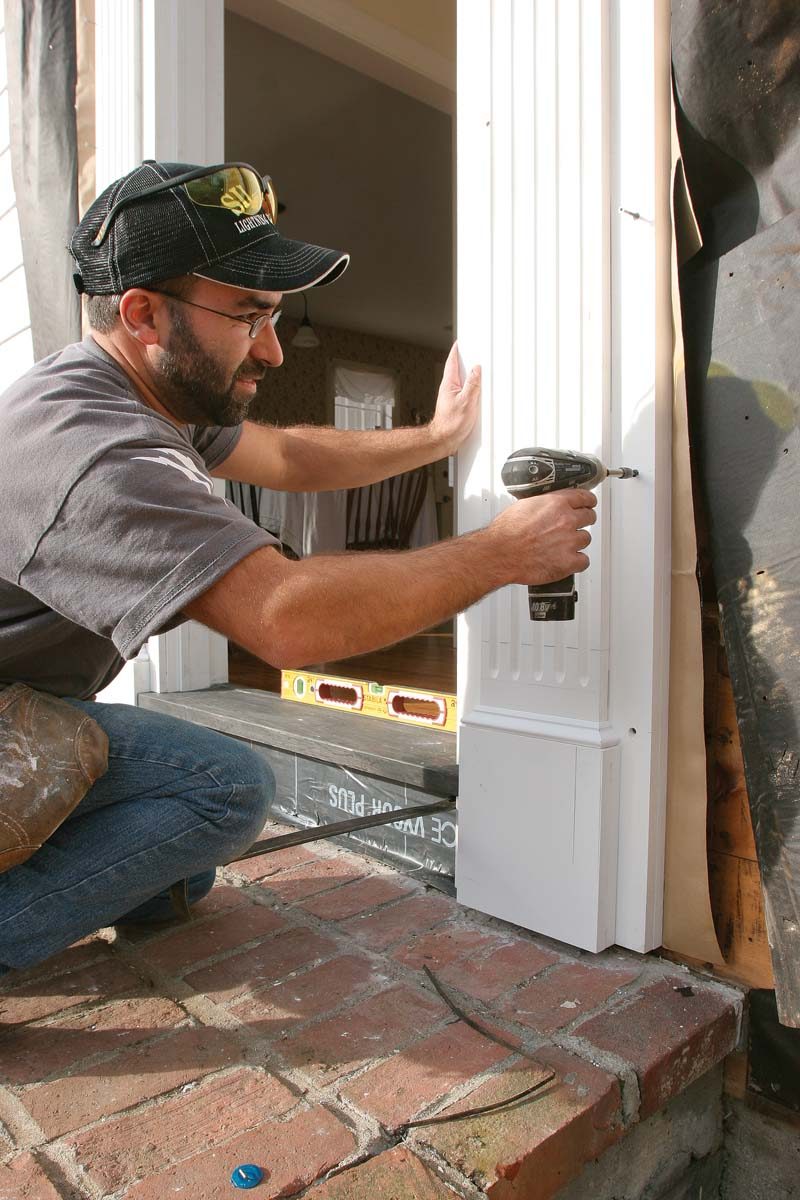 The scale of this project shows the applicability of this approach. No door is too big. However, no matter what size the door is, get assistance moving it into place. This will ensure that the unit seats into the sill gasket evenly. Also, a second set of hands will prove useful once you begin making minor adjustments to the fit of the door frame. Although it’s not shown here, be sure to mount the door in its frame temporarily and to test the fit before you fully secure and flash the assembly. The final step in any door installation is to add low-expansion spray-foam insulation between the door frame and the rough opening. Your goal here is only to air-seal. Leave the bulk of the cavity empty to allow water to drain in the unlikely event that a flashing detail fails.

Beveled siding has long been the go-to material to create drainage at the door sill, but some argue that it doesn’t provide enough support for the threshold and that the threshold can deflect and eventually separate from the jamb legs over time. In all my years as a carpenter, I’ve never had such a problem, and I believe the kick board offers enough support for the threshold at its outer edge. If you’re unconvinced, though, or if your door manufacturer demands an alternative, here are two products worth looking into.

View PDF
Previous: A New Door Fits an Old Jamb Next: Replacing an Entry Door: How to Remove the Old Door, Trim, and Siding