Save Energy with Storm Windows

Contractor Mike Guertin takes a look at the latest products and how to install them.

Synopsis: Over time, corrosion on aluminum storm windows can make them inoperable. Instead of replacing the existing windows with new insulated units, sometimes it makes sense to replace the storm windows instead. In this article, contractor and FHB editorial adviser Mike Guertin reviews the major types of  storm windows, their construction, available options for glass, and their general cost. He also shows how to measure for new storm windows, and the best practice for installing them. Photo: Charles Bickford

A client contacted me about installing replacement double-hung windows because she said the old ones were leaky and difficult to operate. It turned out that the double-hung wood windows on her 1960s ranch were actually in good condition. The problem was with the storm windows, which were aluminum triple-track models that had corroded. Many of the spring-loaded sash locks had frozen up, so the sashes wouldn’t latch in position, and the gasketing had dried up, allowing the sashes to rattle and leak air.

When considering window upgrades for operational or energy-efficiency purposes, many people think only of full replacement windows. But in many cases, installing or replacing storm windows can offer more bang for the buck. And they’re much easier and less intrusive to install. (You also can probably save $25 to $50 per window by installing them yourself.) Storm windows improve the overall energy efficiency of windows, help protect the painted surfaces, and often are the only option for upgrading in historic districts where removing and replacing the original windows is prohibited.

After selecting the right style of storm window from the several common types available, I took measurements, placed the order, and installed the windows for my client.

When I began to research storm windows, I looked at the extrusions and coatings, the sash operation and hardware, the gasketing, and how the corners were fastened (screws only or corner inserts and screws) to assess their quality and function. Because I live near the Atlantic coast, wind resistance is a big consideration. I priced new, white, anodized-aluminum triple-track storms in “good-better-best” models for this article. The prices ranged from about $60 to a little over $100 each. The best was wind-load rated with an integral heavy-duty meeting rail, a low air-infiltration rate, an easy-tilt function for washing, and an optional hard-coat low-e glazing ($20 more per window) for improved energy efficiency.

There are almost as many glazing options for storm windows as there are for primary windows. Here are a few of them:

Ideally, the storm window’s meeting rail should match the meeting rail of the primary window. The standard order is for a 60:40 or 40:60 ratio of lower to upper sash, but if the primary window has a unique meeting-rail level, then the window needs to be measured so that the fabricators can size the sashes accordingly. There’s an upcharge of $3 to $5 for this custom order. 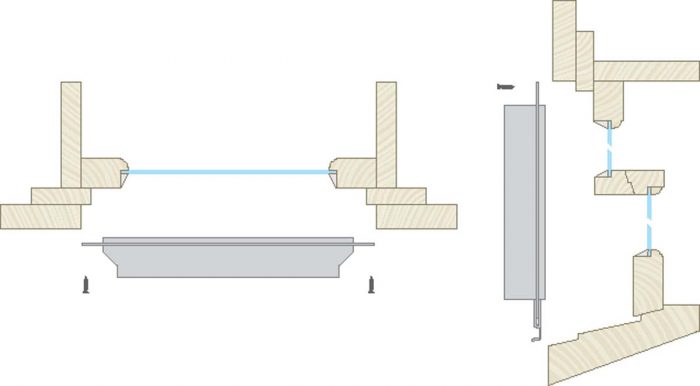 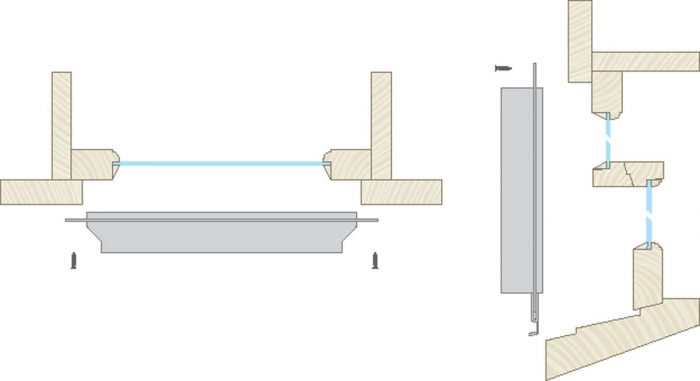 Whether ordering for inset- or outer-mount positions, take the measurements at the same spots—inside the exterior casing. Supply the measurements for each window when ordering, and note whether the windows will be inset mount or outer mount. The fabricator will automatically adjust window dimensions for the mount location and to match the standard incremental manufacturing measurements: Inset-mount models will be slightly undersized, and outer-mount windows will be oversized to overlap the casing enough so that the screw holes align with solid wood. Allow one to two weeks for delivery.

It’s worth spending a little extra time prepping the window jambs, sills, and trim before the new storms are installed. It’s the last chance for unfettered access to repaint and tend to any damage or decay. This prep work is most of the job; new storm-window installation only takes 15 min. to 30 min.

Dry-fit the first storm window to gauge the overlap of the flange on the blind stop or trim. This will guide your placement of the bead of sealant. (You can apply sealant to the back of the flange, but you may get the sealant on yourself when handling the window.)

Run a bead of sealant on the casing or stop sides and top, but not on the sill. Align the bead with the screw holes in the storm window’s flanges. 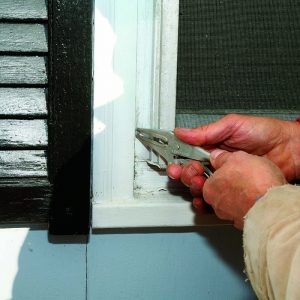 Paint often fills the Phillips slot on old storms’ screw heads and bonds the screws to the flange. A solid rap on a screwdriver usually seats the tip in the screw and breaks the paint bond. Use locking pliers to remove stripped-out screws.

Prep for the new storms 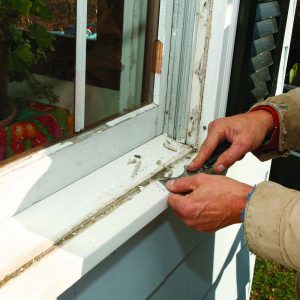 After removing the old storm, scrape off the old caulk, fill the old screw holes, clean and sand surfaces, and paint the area. Repair rot or replace the sill if it’s unsound before installing a new storm window.

Pin the window in place 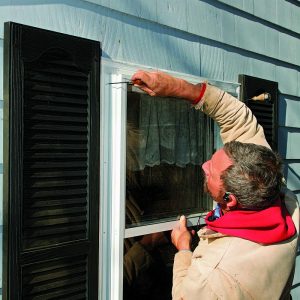 sashes and the frame.

Use another awl to create pilot holes for quick screwing. Be careful driving screws when using a drill/driver. It’s easy to strip them out and chip off their finish. You may want to use a hand screwdriver, which is a little slower but less likely to damage the screws or the window finish.

Generally, I do not caulk the expander down to the sill and instead toe-screw the bottom lip to the sill to keep it in place. There should be at least two weep holes or indentations on the bottom of the sill expander. Leave them open to permit seasonal moisture to drain.

Apply a bead of sealant 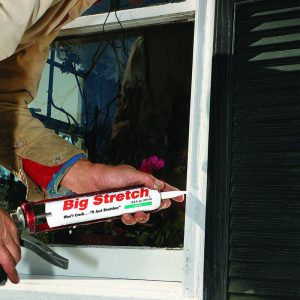 What’s the best sealant to use? The differential movement between the storm-window frame and the wood trim or blind stop may break the bond of inexpensive painter’s caulk. I like to use an elastomeric sealant, which expands and contracts without breaking its bond. Often labeled as “window and door” sealants and as ASTM C920 compliant (read the fine print for this designation), these sealants cost $5 to $7 per tube.