Window Replacement With a Side of Rot Repair

What started out as a leaky window replacement snowballed into replacing a big chunk of wall.

Synopsis: For Travis Brungardt and Joe Cook, co-owners of Catalyst Construction, a call to a client’s home that began as an assessment of some stains and peeling paint under a bedroom-suite window revealed other underlying issues. After pulling off the trim casing, the two found out that the home also had no water-resistive barrier behind the paper-backed lath that held the stucco. Through this repair job, Travis and Joe had to get rid of the rot, install new windows, and prep the new wall for stucco, which was not an inexpensive repair.

My business partner, Joe Cook, and I were originally called to our client’s home to assess some stains and peeling paint under the bedroom-suite window. After looking around, we determined that the four-unit casement window was leaking and should be replaced. The walkout basement directly under it also had the same stains and peeling paint below, as well as staining above it at the wall-to-ceiling connection—likely evidence of the window leak above.

Given the two windows’ close proximity and the relative ease with which we could replace the lower unit, the client agreed to replace the two casement units at the same time, so we ordered two new-construction casement units from Marvin. Considering the poor access and the considerable size and weight of the four-gang windows, we planned two full days for the swap. With the windows and everything we needed to install them on-site, we felt confident in our process and the time allotted. Unfortunately, after we covered the shrubs with tarps and set up the ladders to pull off the window trim, things quickly went off the rails. 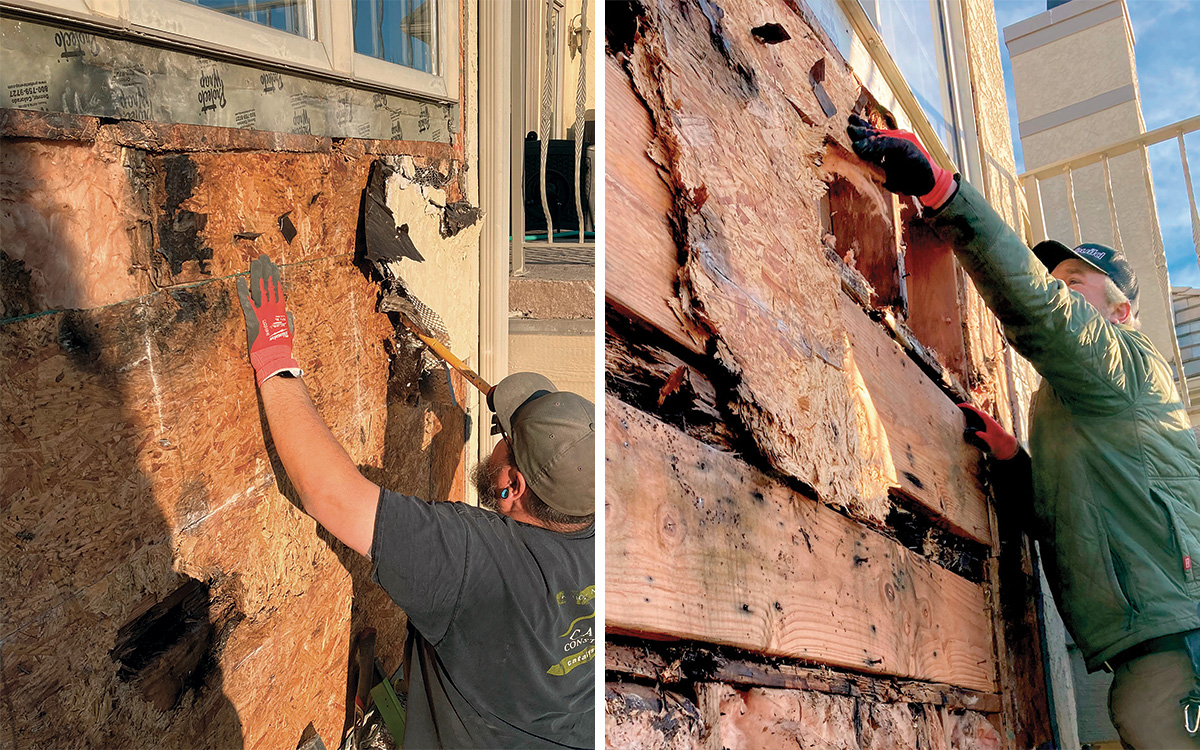 Two ways for water to get in

The bedroom window’s head flashing appeared to be free from defect or failure, so we attributed the majority of the leakage to the three mull connections between the four casements. These hollow channels seemed to direct water inward to saturate the unprotected OSB beneath. But when we pulled off the 5/4-in. LP SmartSide trim casing, we revealed a big problem—this home had no water-resistive barrier (WRB) behind the paper-backed lath that held the stucco. Joe and I immediately began worrying about much more than poorly flashed windows.

The Grade D building paper that’s part of the paper-backed lath that bonds to the stucco is supposed to serve as a bond break, not a water-control layer. Ideally, it crinkles up when the wet stucco is troweled onto the lath and stays that way after the stucco dries. Behind it should be an additional layer of building paper or other water-shedding material that serves as the actual WRB. Working together, the wrinkly first layer and the secondary layer create a drainage cavity and air space that promotes drying. An even better assembly would include a drainage matrix or air gap between the two layers to improve drainage and drying; such a gap is required in wet climates. (For more on creating this drainage plane, see “Rainscreen Products for Stucco Installations”) With no WRB, the wet stucco and paper give up their moisture directly to the OSB. Just as we feared, we found that the OSB was absolute toast in a number of areas. When we pulled it off, we found mold on the insulation’s kraft facing and the back of the drywall, both of which were easily disposed of. Unfortunately, we also found severe framing rot.

Every morning during the project, we’d find a heavy frost on our materials and ladders that quickly converted to liquid water as soon as the sun hit the site. We suspect this regular wetting of the stucco further contributed to wetting the rest of the assembly, though the client declined to allow us to investigate the extent of the damage to verify our hunches.

On day two, with the scope of work much larger than the day before, we removed the lower window unit and stripped the OSB from the jacks and kings on both sides. With the window out, we could see that the sill, cripples, and bottom plate under the window were completely rotted, so we removed the stucco beneath the window all the way to the ground to replace the framing. Fortunately, the jack and king studs supporting the header were in far better shape, and we only had to splice in a short section at the bottom of one side.

After replacing the rotten framing with new stock, we installed Rockwool insulation and Zip System sheathing. We flashed the opening with Zip System stretch tape and sealant and installed the ganged Marvin windows on some 1/4-in. shims under the mulls and outside corners. With the lower window unit in place, we temporarily attached pieces of OSB to the header to protect our work as we moved up the wall. With no realistic hope of finishing, we chose not to remove the bedroom window and instead focused on cleanup and prep for the next day.

Joe drove several structural screws through the top and side jambs of the existing upper window to secure it to the header and jack studs. We removed the fiberglass insulation, moldy backing paper on the drywall, and rotten cripples and sill below that upper window. We then began reframing, which kept us busy until the end of the day, when we had to tarp up for what became two lost work days because of high wind and snow.

We returned the following Monday to remove the upper window and install its replacement following the same procedure as the lower window unit. It was far more challenging to install this window from ladders, so we removed the sashes from the frames and reinstalled them after squaring the unit.

We tacked the flange level across the top, and with the unit centered in the opening, we pulled diagonal measurements and shimmed the frame until both diagonal measurements were the same, indicating that the window was square. Then we nailed off the flanges and reinstalled the two fixed and two operating casements. Following that, we taped the window and the remaining Zip sheathing seams to the existing OSB. We did have one area of existing OSB that we weren’t confident in as it disappeared behind the stucco, so we cut some sheet metal and slid it back behind the stucco as far as we could before taping the head and accessible side of it in place. We installed new 5/4-in. LP SmartSide trim around the windows and replaced the crown molding above the window, getting everything ready for the stucco crew.

With our work completed outside, we moved inside and trimmed out the new window with jamb extensions and casing to match the existing, spackled the few defects in the drywall, and left this for the client to paint. The client also chose to hire a stucco contractor directly, which allowed us to keep our two days of scheduled work to only a week and half with weather delays. It appears that the mull connections on the windows were leaking, but the original builder’s decision to use paper-backed lath directly over the OSB without a second layer only added to the problem and has possibly compromised the sheathing in other areas.

The owner of this house has opted to repair things as they fail rather than address all the potential failures at once. As you can imagine, this wasn’t an inexpensive repair, and it will likely cost tens of thousands of dollars to fix the assembly and set up it up to manage moisture intrusion the right way.

Travis Brungardt is co-owner of Catalyst Construction in Prairie Village, Kan. Photos by the author. 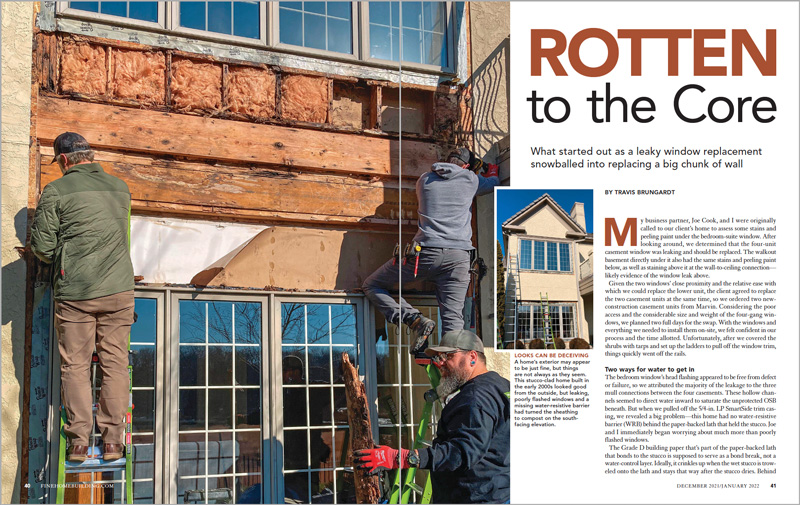