Build or Build Not, There is No Try

There are always challenges to overcome in home building. Ian Schwandt reflects on how he adapted with changing timelines and cost challenges to successfully self-build an affordable high-performance home.

One of the biggest challenges that I have faced in self-building my home is a proclivity to self-perform scopes of work solely for the impact that it can have on the finances of the project. Everything about self-building carries an undertone of “I can do it cheaper and/or better myself.”  This line of thinking comes at the risk of blinding oneself to the value of time. And it’s not just measured in minutes or hours, but in weeks, months, and passing seasons.

When we secured the financing for this project in the summer of 2020 (at the height of the Covid-19 pandemic), I fully intended to self-perform every aspect of the project outside of the mechanical and excavation work. And I brazenly expected to complete it all in seven months, or 28 consecutive 60-hour weeks. It became apparent, more quickly to those around me than myself, that this pace and efficiency of work was not going to be possible. Between working part-time to help finance the project, winter weather, and the availability of an extra set of hands when needed, by the time I reached the three-month anniversary of the ground-breaking, it was time to make some decisions that put a greater value on my time.

Some subcontracting options were clear and easy to make. My rear deck with its full porch roof required some very large footings to hold up the 10-ft. by 45-ft. deck structure and the roof. Using helical piers allowed me to meet the engineering requirements in an economical way that did not mean hours of my time digging and pouring concrete. 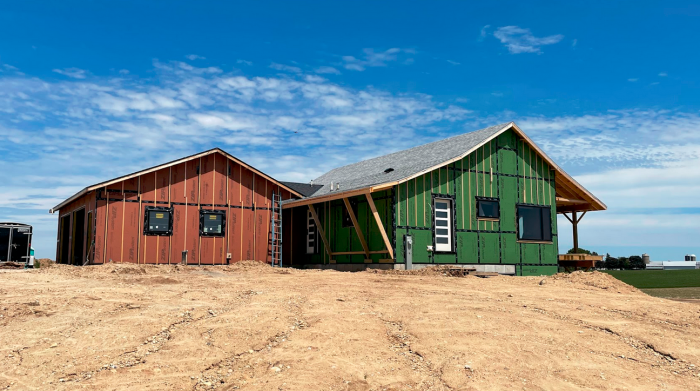 Installing the asphalt shingles, something that I have done plenty of and feel pretty efficient doing, was a less obvious area to save my own time, especially since I had already purchased all of the materials from my main supplier. At the urging of those around me I made a few calls to see if I could land a roofer on short notice in the month of January. Through a close friend I found a small company that came out and shingled the entire roof over the course of a week, working as much as the cold winter weather allowed.

Self-performing the dense-pack cellulose for the double-stud wall assembly was something that I had set out to do from the start. I bought the auto fire stapler that I had seen used to install the netting on other jobs, which made installing the netting a pretty straightforward task. Dense-packing the walls involved a steeper learning curve, but with the knowledge that I gained at the Net Zero Insulation Strategies class at Yestermorrow and some additional internet research I was able rent a suitable insulation-blowing machine, a Krendl 425, and fabricate my own reducer nozzle out of PVC pipe. The process was slow, but I got the job done with help from my wife, Sara, and her father, Bob, feeding the blower and keeping me up on the scaffolding. 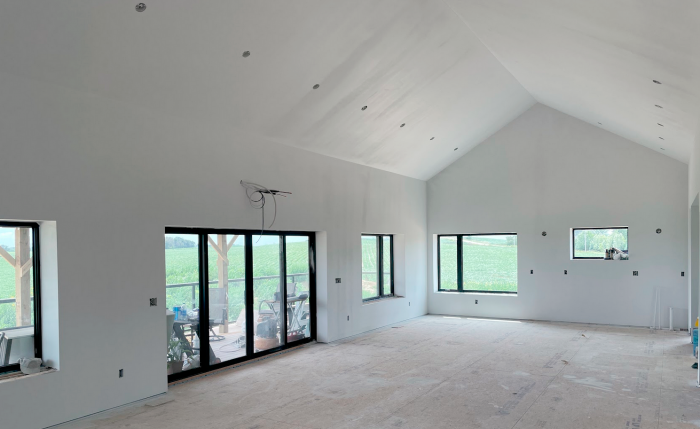 From day one of the design process, we wanted a house with big cathedral ceilings, which I knew would challenge me and whomever else had to work on them. No challenge loomed darker in my mind than drywall. Not only is drywall something that I have not done a lot of, it’s also something that when I have done it, it has not gone well or been enjoyable whatsoever.

Looming just as large as doing the drywall work itself was my budget, already taking a beating from increasing cost of goods  and the project schedule now into its seventh month. Through the same friend that hooked me up with roofers I found a small, four-man drywall company. The owner came out and confidently told me that this job was a wheelhouse job for him and his crew despite the high ceilings. His schedule was full, but he felt that if I was flexible he could squeeze the high-ceilinged great room in between two other new construction jobs. That was good enough for me as it would save me from the most difficult part of the job without hurting the budget too much.

By the time month nine of the project came around and the drywallers came back to measure for their delivery, my outlook on the project had changed. The cost-of-goods increases, the increase in local property values, and my confidence that my part-time job would become a good full-time job gave us what we needed to justify an increase in our budget to $125 per sq. ft. At the site measure for the drywall delivery, the drywaller kept asking me where I wanted his crew to stop, since I was already having him do the hard part of the job. I told him that at this point I would have him do the whole project if he could find the time. 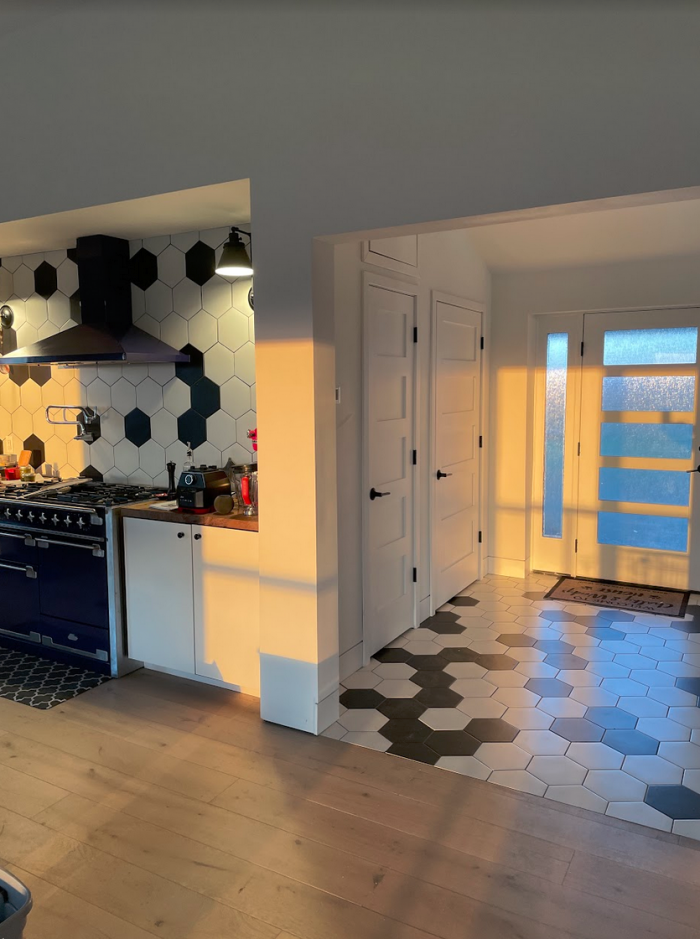 Lucky for me, one of his new-construction projects was put on hold and he had a three-week window for my house. Three weeks later I wrote the drywaller a $20,000 check and we were on to painting. We installed Trim Tex architectural bead at the floor that my engineered hardwood flooring would disappear into instead of using base molding.

For the remainder of the project, whenever Sara and I found ourselves frustrated by how long something was taking or how far off into the future it seemed we were from completion, one of us would usually say, “Well, we could still be drywalling” as way to put our progress back in perspective. Self-performing as much of the build as I could was a major goal of mine, but throughout the process I came to realize that I needed to be flexible and get out of my own way. Executing the project to achieve an affordably built, high-performance home was the true goal.