The right primer improves the look and longevity of a paint job.

Synopsis: This article explains what primers do and why you need to use them, then offers a detailed explanation of the various types of primers and explains where each is used.

The final step of any painting prep should be priming the surface before you paint. I had to learn the hard way. The summer I graduated from high school, an enterprising friend wanted to go into the house-painting business. We didn’t know spit about painting; but we were young and ambitious, and we had dollar signs in our eyes.

We got our first job and were intent on getting several referrals from it. After spending some hot hours scraping and sanding in the sun (in pursuit of an enviable tan and profit margin), we decided to skip the priming and started painting. Watching paint dry can lull you to sleep, but watching a wall drink up your hard work is a nightmare. We eventually coated the house four times using twice as much paint as we should have, and a year and a half later, I got a call: “Your paint is peeling.”

A primer overcomes problems in the surface you are about to paint. If the surface is an already painted surface in good condition, there’s no need for primer. But this is rarely the case.

Some surfaces are slick and pose adhesion problems for paint; others, like new drywall, have varying porosities (they absorb at different rates across the surface); other surfaces may be stained by water or grease. Wood knots and tannins in some woods can bleed through the paint’s surface and ruin your hard work. Unfortunately, one type of primer can’t fix all these problems.

According to Steve Revnew at Sherwin Williams, “Each primer is formulated to provide specific properties, with each ingredient of the primer being carefully selected to optimize those properties.” For example, a binder (the glue that holds the coating together) can be selected based on its small particle size and ability to dry quickly, which gives the primer good sealing properties. Another binder can be chosen because it offers an excellent adhesion property, which means the primer will bond well to a variety of substrates. Pigments (finely ground particles in primer, also called solids) are selected to provide color, gloss, and sandability, as well as to provide sealing properties. It is the combination of all the raw materials in a formula that provides the primer’s key properties.

Just as primer is formulated to cover specific substrates, it also is formulated to be compatible with certain paint. To be sure that you’re going to get the best paint job, don’t mix manufacturers. In other words, if you are using a Benjamin Moore paint, it’s a good idea to use their primer. Also, primer should be top coated within a couple of days; otherwise, it will lose its integrity and will need to be redone.

The difference between oil-base and latex-base primers

Because many of the same pigments are used in both latex-base and oil-base primers, it’s the binder that really sets them apart. Binders give the primer key properties such as surface adhesion, which promotes a stronger bond for the topcoat of paint.

The phrase oil base is used interchangeably for both alkyds and oils. The binder in these primers is made from vegetable oils (tung, linseed, soya) that oxidize (or cure) when exposed to air. As the primer dries, it leaves the binder and pigment on the surface. The binder oxidizes as it reacts chemically with oxygen in the air and forms a hard, nearly impermeable shell over the substrate. The oxidation process doesn’t stop, and eventually, the primer hardens to a point where it is vulnerable to cracking and chipping.

Film formation, or coalescence, of latex primers occurs when the water evaporates and the particles of pigment and acrylic binder come closer together. As the liquid evaporates, capillary action draws the binder particles together, forcing them to bind into a continuous film.

Latex primers retain microscopic openings that let moisture vapor pass through. Oil-base primers form a much tighter film that is more prone to blistering if applied over damp surfaces or over an area where water migration is an issue.

The terms primer and primer-sealer are commonly used interchangeably, but there is a difference. Primer is made mainly from fillers and pigments designed to fill out textural variations and to provide a good surface for paint to stick to. Primers do not contain enough binder (also called resin) to even out the porosity of different surfaces such as drywall and joint compound. Primer-sealers are designed to go over a porous surface and seal off suction caused by porosity and to prepare a surface for painting. Primer-sealers generally contain more binder and less pigment than primers.

Probably the most commonly painted and often least-prepared surface is drywall. PVA (polyvinyl acetate) primer-sealer is a latexbase product with a polyvinyl-acetate binder. PVA primer-sealer seals the porosity of drywall and is a great-performing product for a relatively low cost. Although it can be used on wood, it’s a bad idea to prime shelves with it. Even when fully hardened, this type of primer is too soft to bear weight.

PVA primer-sealers are great at preparing a smooth surface but cannot correct minor imperfections in surface textures; for that, you need a high-build primer-sealer. High-build drywall primer-sealer fills and surfaces rough and uneven drywall construction (but still can’t hide a bad tape job).

Sherwin-Williams’s Builders Solution (www.sherwin-williams.com) is a two-part surfacer and paint system for new drywall. The surfacer is the next generation of highbuild primer that has enough quality pigment for high build and is formulated with enough binder to seal the drywall and create a level film for enamel and semigloss paints, which are notorious for showing surface flaws.

B-I-N Primer Sealer (www.zinsser.com), introduced in 1946, uses pure, natural shellac as its resin, which is dispersed in a solution of denatured alcohol. The nontoxic shellac resin seals stains so that residue cannot bleed through. Stains are one thing, but odor-causing bacteria are another factor in stain repair. The denatured-alcohol solvent kills bacteria on contact. Along with being a high-bonding primer, the resin formulation of B-I-N fills pores and levels the absorbency of wood, drywall, and tape joints for a uniform topcoat.

Because B-I-N uses alcohol as its solvent, temperature doesn’t affect the drying time of this primer. B-I-N is dry to the touch in minutes, and can be sanded or topcoated with any finish in 45 minutes. The alcohol smell dissipates quickly, leaving no lingering paint odor, which is ideal when working in occupied homes. 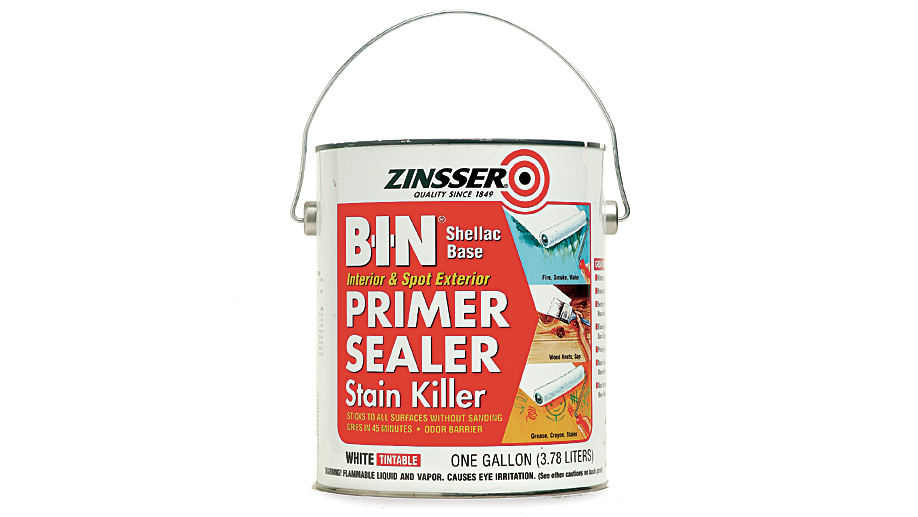 Because the alcohol dries immediately, the nonpermeable shellac film forms before stains can migrate and locks in smoke and other associated odors. The white pigment, in this case the expensive and effective titanium dioxide, provides the whiteness and high hiding power to cover the stain. The use of appropriate extenders provides some bulk to the primer while ensuring the proper spacing of the titaniumdioxide particles to avoid any loss of hiding. The pigment also provides tooth or texture to which the following coat can adhere.

The limitation to B-I-N is that it’s an interior primer. It can be used outdoors to spotprime difficult exterior stains, but the shellac has a low melting point and can become soft if covered with dark paint and exposed to long hours of direct sunlight. It’s also rather inflexible, compared to acrylic latex primers, and costs more, too.

Latex-base and oil-base stain-blocking primers are effective, but you really have to know what kind of stain you’re covering to get optimal results. The rule of thumb is to use a latex-base primer to cover solvent-borne stains such as crayon, grease, or scuff marks because the water will not reactivate these stains. Oil-base primers are most effective when used to block waterborne stains (rust, most food stains, wood tannins, and the like). 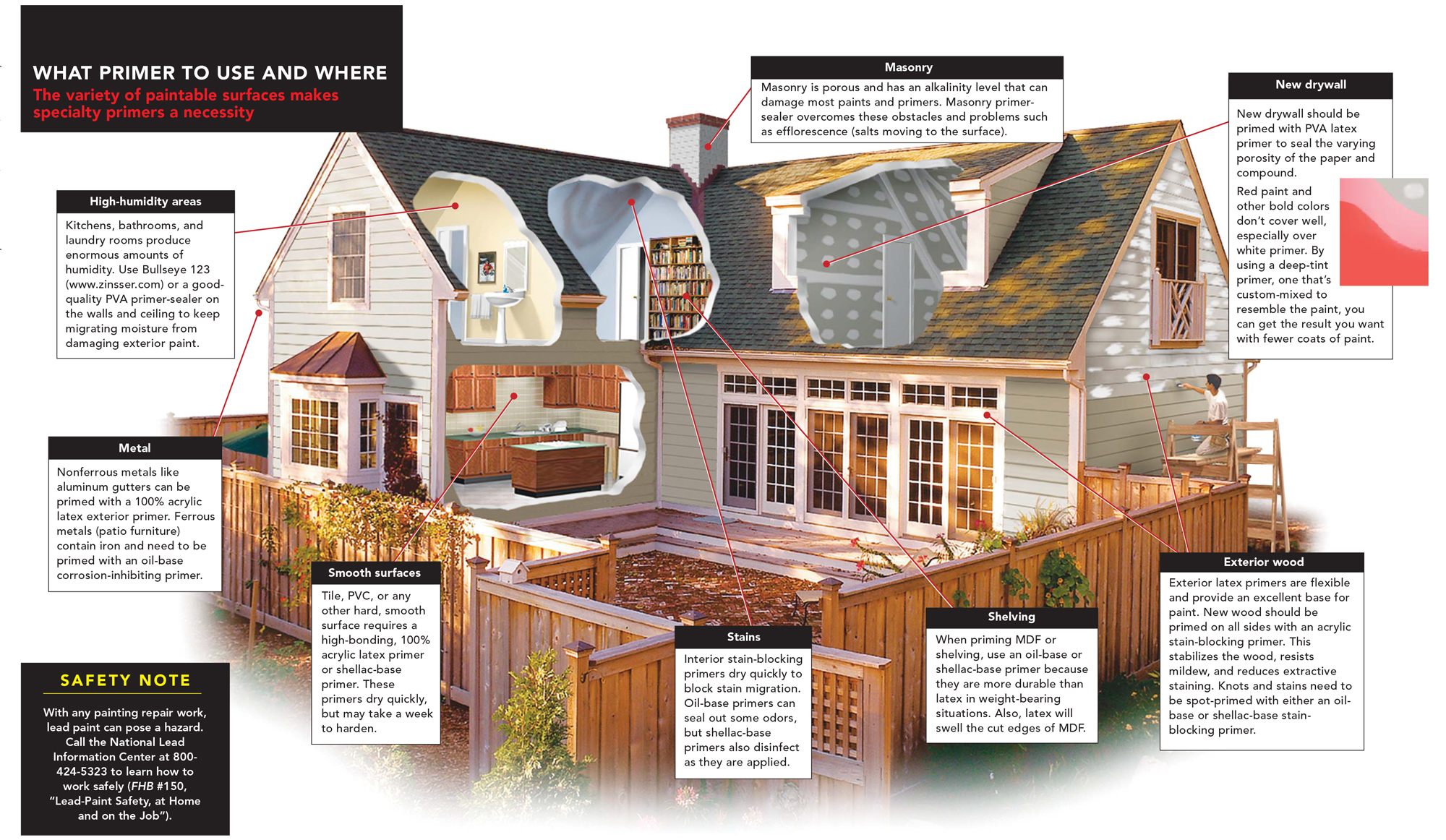 When priming wood siding, the wood’s condition determines which primer you should use. In addition to the physical condition and moisture content of the wood, its chemical composition affects the performance of primer and ultimately the paint.

Cedar and redwood, the most commonly used lumber for exterior siding, contain water-soluble extractives, commonly referred to as tannins. These tannins in cedar and redwood can bleed through latex primer, and the old rule was to use an oil-base, stain blocking primer. Because oil-base primers are so inflexible (brittle is how one painter describes them), painters are now using 100% acrylic latex stain-blocking primers. Any waterborne stains will show up immediately, and they can be spot-primed with an oil-base stain-blocking primer without inhibiting the flexibility of the latex

Pitch and resin are water-insoluble extractives that also may stain painted wood. If the wood has been kiln-dried, the pitch hardens and sets in the wood. If not, during warm weather the pitch can become fluid, flow to the wood’s surface to soften, and discolor the paint. Knots in softwood contain resin that also can bleed through and discolor paint. Alkyd primers do not block these resins; they should be spot-primed with B-I-N.

Weathered wood with peeling paint should be scraped, sanded, and then primed with a 100% acrylic latex primer. But there’s also another alternative. Peel-Stop, which is made by Zinsser, binds failing paint and glues the cracks and gaps so that they readhere to the substrate. Peel-Stop is a bridging sealer that repairs the old paint while preparing it for a new topcoat. 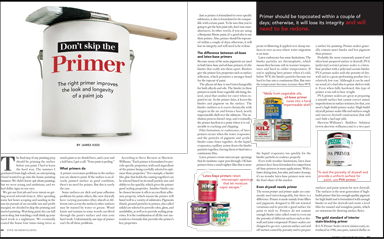 For more photos and details on the importance of primer, click the View PDF button below.

View PDF
Previous: What’s the Difference: Primers Next: Why Pay More for Paint?

Everything you need to know to get the perfect finish, from choosing the right paint to applying the final coat

Become a member and get unlimited site access, including the Painting Project Guide.