The main differences between submersible and pedestal-style sump pumps come down to cost and cooling.

Basements provide space for storage, recreation, and mechanicals, but because they are at least partly below grade, they are prone to leaking from a high water table or from excessive rainfall. Leaks not only can damage the stuff we store in our basements, but they also can create the conditions for mold and mildew to grow. (See “Build a Risk-Free Finished Basement,” FHB #248)

Many houses have a sump pump to move water from the basement to the outside, where it is directed away from the house. This device gets its name from the pit, or sump, that is created in the concrete slab to collect excess water. In a proper installation, a drain system directs water from the foundation to the sump, where it is discharged by the pump. The pump, therefore, needs to be powerful enough to lift the water from the sump to the discharge location. In a typical basement, this is often through the rim joist.

When purchasing a sump pump, don’t be fooled by the gallons-per-hour (GPH) or gallons-per-minute (GPM) number that some manufacturers highlight on the packaging. This number usually reflects the amount of water the pump will discharge at a static head of 0 ft. Static head is the vertical distance water must be pumped. In a basement with a 10-ft.-tall ceiling and a pump discharging water through the rim joist from an 18-in.-deep sump, the static head is closer to 12 ft. If a particular sump pump’s capacity is 4800 GPH at a static head of 0 ft., its capacity at a static head of 12 ft. will be significantly lower. (And the figure you really need to know is the total dynamic head. See “Sizing a sump pump” for instructions on how to determine it.)

It’s also important to establish how much filtration you need. If your sump was built correctly, it should allow water to enter but not rocks and other debris. If you’re confident that solids won’t be a problem, you can buy a sump pump with minimal filtration. If you think the occasional small rock may enter the sump, you’ll be better off with a pump that can handle solids. The impeller design that accommodates solids also reduces the pump’s capacity, though, so you’ll need a more powerful (and more expensive) pump.

When shopping for a sump pump, you will have two basic options: submersible and pedestal.

A submersible pump is compact and designed to be placed on the bottom of the sump. It can be made of cast iron, stainless steel, plastic, or a combination of steel and plastic. Cast iron is generally considered the most durable, and because it’s the heaviest of the materials, a cast-iron pump is the least likely to move around inside the sump. The advantage of having a pump that’s constantly submerged in water is that it stays cool even when it’s working at maximum capacity. The downside is that pumps with housings of lesser quality are more likely to develop leaks prematurely.

A submersible pump can have one of three switch mechanisms. The first two use a float that rises and falls with the water level. When the float reaches a certain height, it trips the switch and turns on the pump. With a vertical-float switch, the float rides up and down on a rod. With a tethered-float switch, the float swings in an arc with changes in the water level. If your sump is narrow, you probably don’t want a pump with a tethered float, which can get caught on the edge of the sump. The third switch mechanism uses a diaphragm, which responds to water pressure rather than water level. 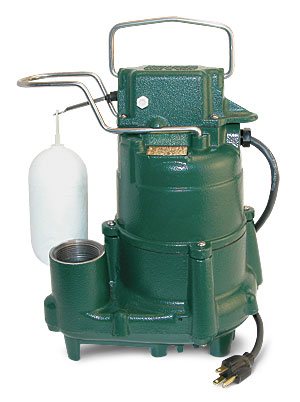 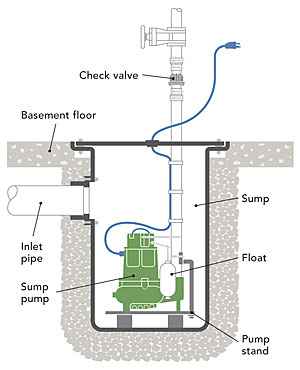 With a pedestal pump, the motor and the impeller are separate, with the impeller sitting atop a pedestal that rests on the bottom of the sump, and the motor at the opposite end of a column long enough to raise the motor above the basement floor. The advantage of this design is that the motor doesn’t need to be in a waterproof housing; therefore, the cost of a pedestal pump is less than that of a submersible pump. Because the motor isn’t constantly sitting in water, it may outlive the motor in a lower-quality submersible pump. On the other hand, it doesn’t benefit from the natural cooling that the water provides and so may overheat during a period of heavy operation. The location of the motor outside of the sump also means that a pedestal pump is noisier than a submersible pump and that the pump is more susceptible to damage from people and objects. Pedestal pumps use only vertical-float switches. 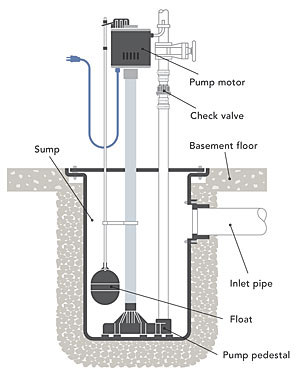 If you’re replacing a pump that could always handle the volume of water it needed to handle, your decision is simple: Buy a new pump with the same capacity. If you’re replacing a pump that wasn’t up to the task or that failed prematurely because it was oversize (and therefore cycled on and off too frequently), or if you’re installing a sump pump for the first time, it’s important to get the sizing right.

First, you need to know how much water must be pumped out every minute. This figure is known as the system capacity. If you’re proactively replacing an old  pump that still works, or if you have a backup pump (both good ideas), you can find out the system capacity by measuring how much water accumulates in one minute after the pump has run. It’s best to do this during a heavy rain. For an 18-in.-dia. sump, an inch of water is approximately equal to 1 gal.

Chart A: Equivalent length of pipe due to fittings