From Cardboard Mock-Ups to Kitchen Cabinets

Fine-tuning a kitchen makeover with mock-ups dialed in a delightful design.

Synopsis: When they were house-hunting, Craig and Amanda Zehnder were immediately attracted to a 1901 farmhouse in Seattle’s Wallingford neighborhood. Although it was in great shape for its age, the kitchen had been gutted in the early 1980s and remodeled in a style that was deficient practically and aesthetically. The Zehnders wanted to redo the space to look like a farmhouse kitchen, as well as make it more functional. The key to enhancing functionality turned out to be moving a stairway whose door opened into the kitchen a few feet to the east and then moving the door to the hall. After that change was made, Craig made mock-ups of the cabinets and counters out of cardboard to make sure the proportions of the new kitchen were correct.

Seattle’s Wallingford neighborhood is filled with charming bungalows from the early 20th century, but when Craig Zehnder and his wife, Amanda, were house-hunting, it was a 1901 farmhouse that caught their eye. It immediately reminded them both of the rural farmhouses of their Michigan childhoods. Overall, the house was in great shape for its age, but as an architect and craftsman, Craig saw it as a blank canvas waiting for some creative updates.

Nothing was left of the original kitchen. Gutted and remodeled in the early 1980s, the kitchen had been outfitted with inexpensive appliances and cabinets, laminate countertops, and can lights. Along the south wall, an awkward soffit topped the upper cabinets. The north wall was a blank.

At a basic level, the kitchen functioned, but it didn’t have much appeal. Plus, the Zehnders found that the lack of an effective range hood was a nuisance, especially during intense cooking while entertaining family and friends.

Typical of houses from this era, the door to the basement was in the kitchen, wasting valuable floor space. Also, the refrigerator was jammed so close to the hall that it hid the door casings.

After drawing several plans that tried to make the layout work with the basement door, Craig finally had the inspiration to move the stair a few feet to the east, with access off the hall. That freed space in the corner for a full-height pantry, with plenty of room to hide the microwave and a large pullout drawer for oversize items.

Moving the adjacent wall a few inches to the north gave the refrigerator a built-in look and allowed for doorway trim that matched the style of the rest of the house.

To make sure the proportions of the new kitchen both looked and felt right, Craig mocked it up in cardboard and used a black marker to sketch out the cabinet faces and forms. This was an especially useful exercise for the north wall, where the design called for a built-in hutch. Because of the windows on the west wall, the hutch needed to be shallower in depth than typical kitchen cabinets.

The new kitchen looks right at home in its 100-year-old surroundings. The Zehnders are particularly proud when they have visitors who say that it looks like it could be the original kitchen.

For more information, floor plans, and before and after photos of this farmhouse kitchen remodel, click the View PDF button below. 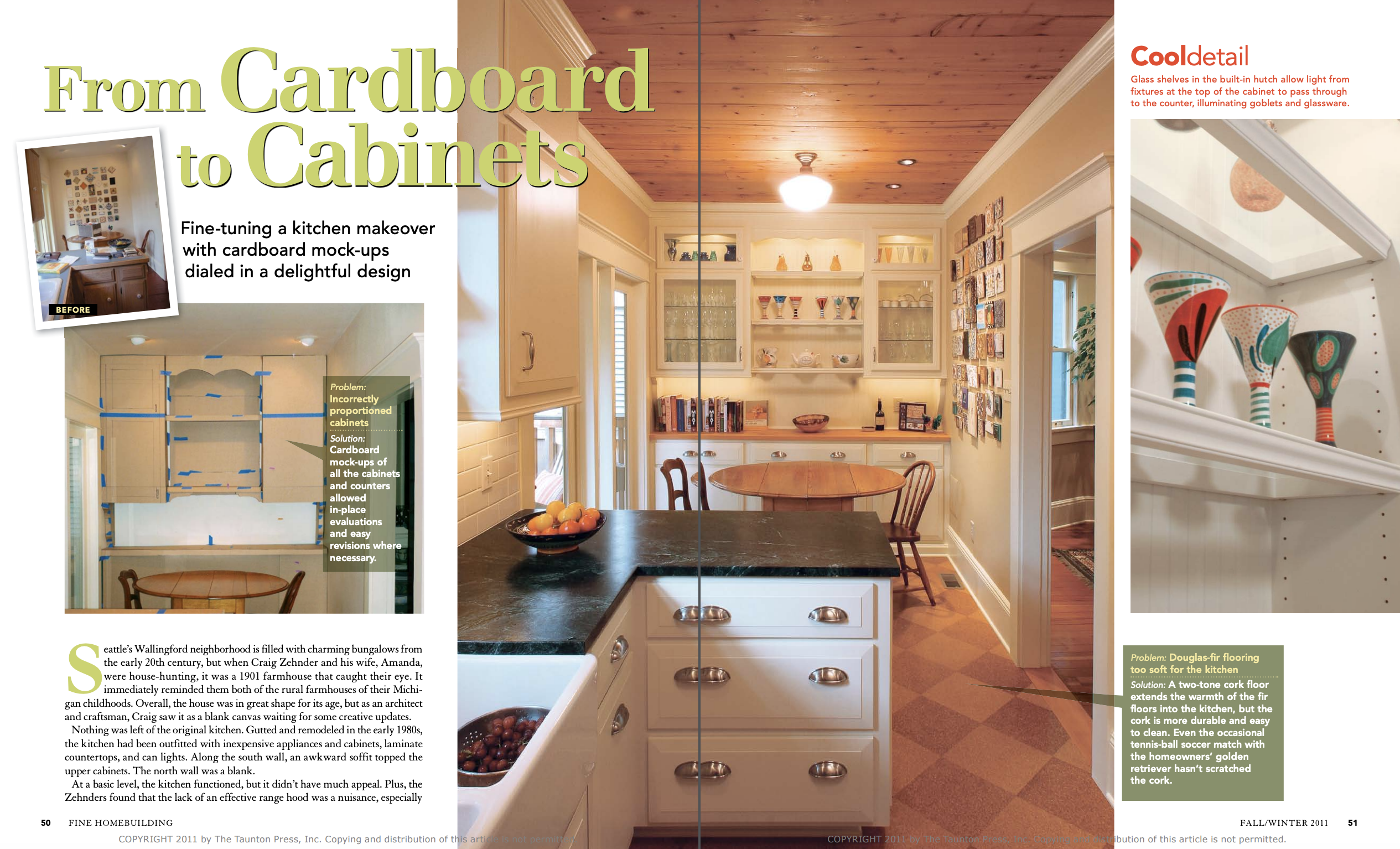 View PDF
Previous: How to Install Inset Cabinet Doors Next: How to Design Kitchen Cabinets with Mock-Ups