Opening up an old house ties together these important spaces.

Synopsis: Old houses have lots of appeal, but frequently, their interior spaces could do with a contemporary revision. For this home in Seattle, architect Nicole Starnes Taylor needed to unite the disconnected kitchen and dining room to make the kitchen the heart of the house. Awkwardly placed doors and circulation paths wasted 75% of the potentially useful space in the kitchen and dining room area; reclaiming unused space was a viable solution and also more cost-effective than a kitchen addition. The existing kitchen needed work: The cabinets were too close to the countertops, lighting was poor, and windows were badly located. In the dining room, the only logical place for a table placed the table in a circulation path through the room. Also, the windows were badly placed. By knocking down an unused chimney between the kitchen and dining room and also removing a number of doors, Taylor connected the rooms visually and physically. The removal of a mudroom off the kitchen allowed the installation of French doors that, along with a new window over the sink, bring in plenty of natural light. A peninsula between the rooms acts as a perch space and permits circulation between the two rooms.

Old homes are seductive. They charm us with their high ceilings, quiet plaster walls, solid-oak floors, painted wood trim, and scale and proportion that for many of us says “home.” I think this is why so many century-old homes in Seattle, where I work, have dodged the wrecking ball and continue to be patched, remodeled, and loved. The one consistent albatross in these sweet old homes, however, is the kitchen.

The floor plan in this 1926 house was typical for the era, with the living room, dining room, and kitchen all stacked along one side of the house. The existing kitchen and dining room were each large enough, but they were disconnected from each other through a maze of doors and awkward circulation paths that wasted 75% of the potentially useful space.

My client loves to cook and entertain, so the redesign she hired me for needed to transform her isolated kitchen into the heart of the house. In fact, the new design focused primarily on the kitchen, with the additional goals of connecting better to the backyard and creating a more usable dining room.

We could have extended the home’s footprint, but the client and I felt that good design could fix the house’s issues on a more reasonable budget. This cost-saving measure allowed more money for custom cabinets, wood flooring, countertops, new windows, and appliances.

The kitchen didn’t play well with the dining room

In the existing kitchen, the upper cabinets started 12 in. above the countertop, making food prep and small-appliance usage almost impossible. The lighting was poor, and the kitchen needed more natural light. The existing window over the sink looked directly into the neighbor’s house. Southern light and views of the backyard and of downtown Seattle were cropped by a small window and a mudroom. In the existing dining room, the only spot that made sense for a table was in the way of anyone walking between the kitchen and the living room. Plenty of natural light came from two wide 5-ft.-high windows. However, these windows looked directly into the neighbor’s bathroom 10 ft. away. Four doors opening into the dining room reinforced the sense of separation between it and the kitchen.

Opening and joining the spaces 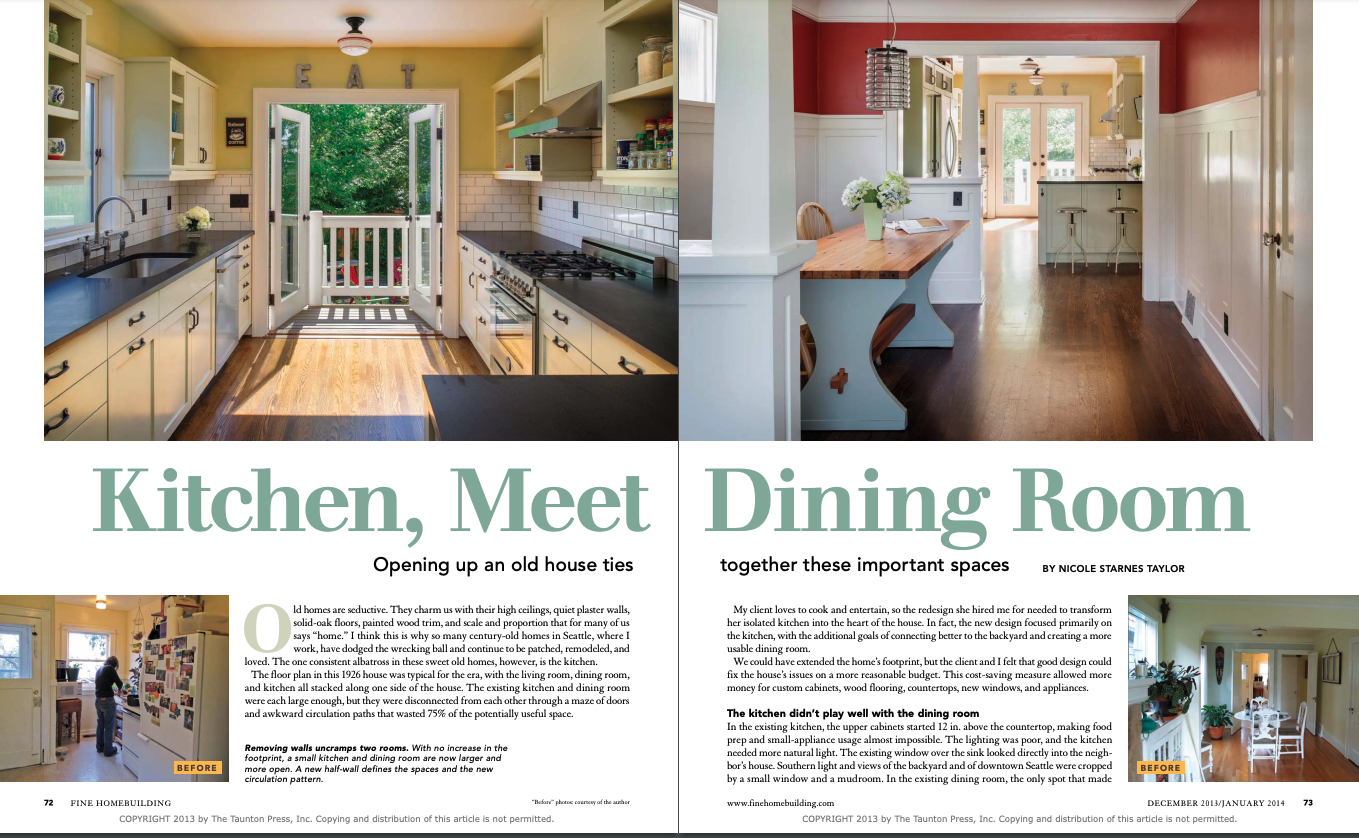