A Kitchen that’s True to Tradition

Before Laura Medicus got her hands on it, the kitchen in this 1930s Tudor-style house in Denver, Colorado, was a confused space with an oddball character—the results of updates done in different decades, most likely the 1940s and 1980s. On the whole, it had a weirdly retro vibe at odds with the house’s traditional style—replete with marble floors and a turret entry. 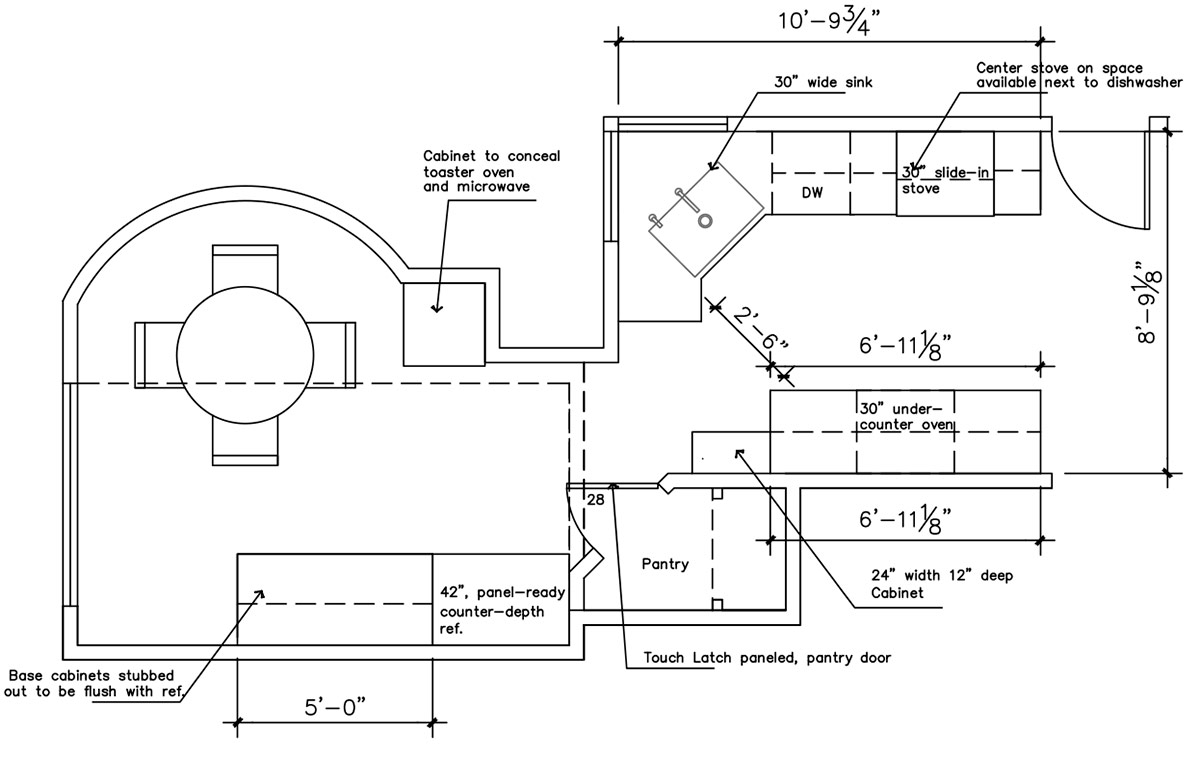 True to the era in which it was built, the kitchen is tucked away at the rear of the house, making it tertiary to the other rooms. The tiny 88-sq.-ft. space sits sandwiched between a staircase located behind one wall and a garage on the opposite side. Another defining feature is the atypical galley shape. Add to the mix a corner sink and angled doorway leading to the adjacent breakfast nook and, well, it was a ball of wax that was handed to Medicus.

Though a bit wacky, the homeowner wanted to keep the existing floor plan in order to stay true to the house style. As Medicus points out: “An open-concept kitchen wouldn’t have worked here.” The biggest head-scratcher was where to put the refrigerator, which was taking up valuable space. The designer moved it to abut the brick wall in the dining area—an unusual move, putting a key kitchen appliance in a separate room. By cladding the refrigerator to match the cabinets and drawers beside it, Medicus created a congruous transition from the kitchen to the dining room by way of that unit. She also hid the pantry using the same treatment. 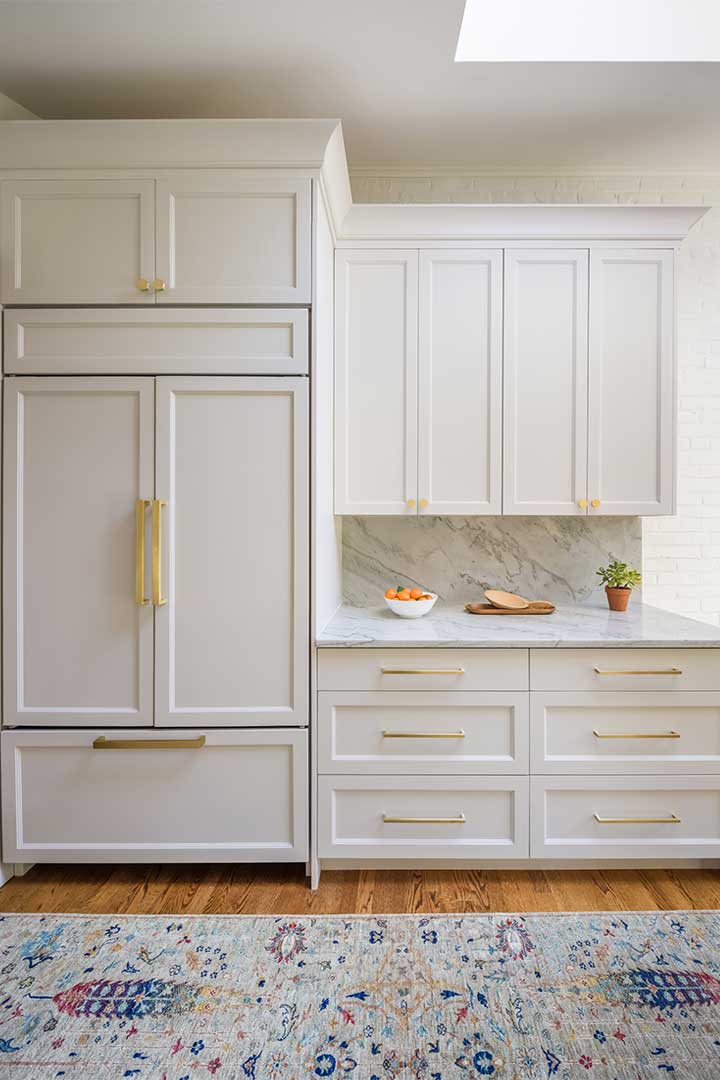 The brick wall hindered the addition of the library lights Medicus would have liked to spec for above the refrigerator; that section of the house is on a slab, and the electrical wiring was complicated because there wasn’t a crawlspace for running it under the floor. The brick also meant there was no good way to conceal wires in the wall either. They ended up channeling into the floor to power the refrigerator. 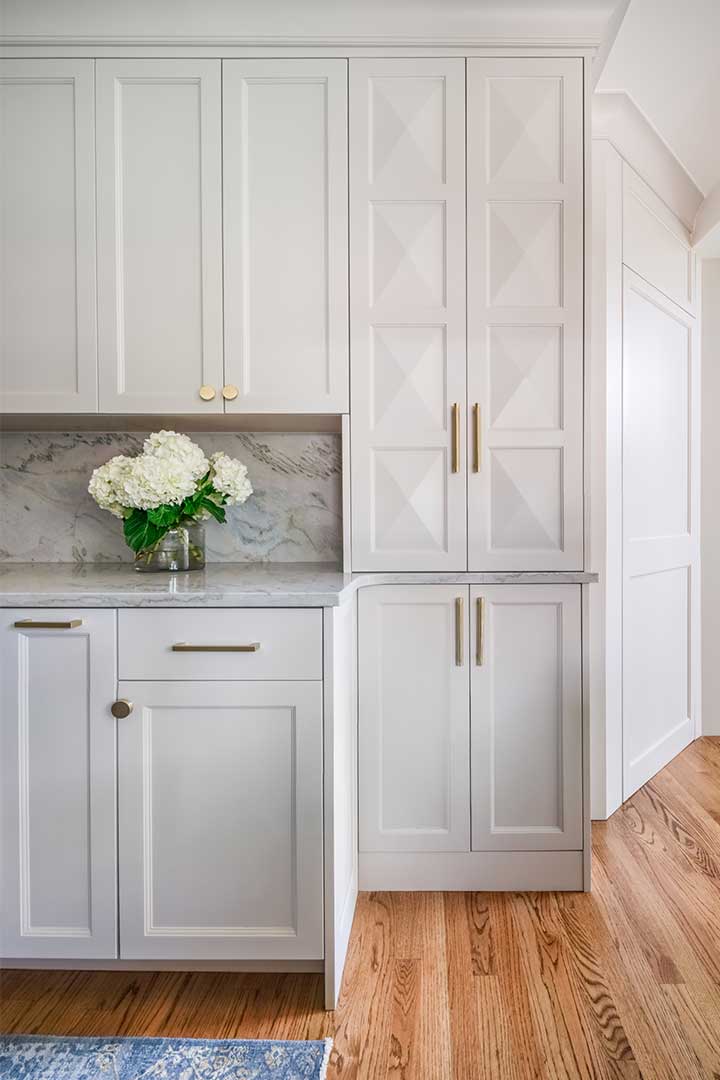 In addition to moving the fridge, Medicus removed one of the two sinks (a common feature in the area’s Kosher homes), and added double ovens. Previously, there had been a slide-in stove with microwave on the short 6-ft. 11-in. south wall; she moved that to the sink/dishwasher wall, and added an undercounter oven on the opposite side.

Working with rather than against the room’s oddities meant looking for opportunities to tie all of the elements together, which Medicus did using new crown moldings and classic-style cabinets for architectural interest. Of special note are the pyramid cabinet doors behind which sits the microwave; they are one of the many details that called for an exceptionally skilled carpenter.

Another of Medicus’s unconventional choices was living brass hardware, which promises to darken in time. “It’s something people in Britain have always used,” she notes. “Meanwhile, Americans are struggling to figure out if they like it or not. Some of my more adventurous clients are willing to try it. People are the same way about marble, which will stain and scratch as it ages. In this country, we aren’t comfortable with that. We want everything to look clean and quartz-like, and like it was just installed yesterday—forever.” In this case, she went in the opposite direction—to elegant effect.