Unclog your bathroom sink with one of these simple maintenance procedures.

The bathroom sink drain gets its fair share of clogs, mostly due to human hair and soap scum, and sometimes an occasional toothbrush. Nine times out of 10, you can clear a sink drain by simply removing the pop-up from the center of the bowl and cleaning off the hair.

Some sinks, such as bowl sinks, do not have a pop-up. For these models you can often auger straight down into the vertical part of the trap. However, your cable may not be able to get through the trap itself. Be sure to check the drainpipes for leaks after you’ve tried any auguring.

To clear the drain in a sink with a pop-up you have to go under the sink and unscrew the cap holding the lever that activates the pop-up. Then pull the lever straight back and out. Do not lose any parts. Be wary of a washer that might come out as well. If it does, reinsert it with the concave part facing out toward the ball on the lever 1. Remove the pop-up. This is where most clogs occur. If the pop-up comes out clean, as the one shown here 2, you’ll have to find the clog in another location. If it comes out with a mass of hair, clean it. With the pop-up removed, you can rod the line straight down from the sink 3. You can also use a fish-hook grabber to pull out any debris and balls of hair. You may want to forgo using the auger and go straight to the P-trap. Put a bucket under the trap to catch the water that’s in it. Then simply unscrew the two slip nuts and the trap will fall away 4. Clean the trap and make sure there is no blockage in the trap line going into the wall. If you still can’t find the blockage, you may have to clean the trap line. 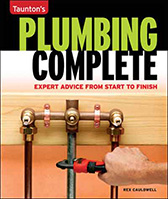 Previous: How to Clean a Faucet Aerator Next: Cleaning a Sink Trap Line