Here's what to do when troubleshooting reveals a quick garbage-disposal fix or repair is not an option.

As a plumber, I get a lot of calls about garbage disposal problems. I’ve seen an amazing variety of items take a disposal out of commission—everything from knickknacks to twist ties, bottle caps, and beef bones. But a disposal also can stop working for other reasons. The motor can overheat and seize, or an internal part can simply wear out or break.

When I arrive on the job, I have a strategy that tells me in a matter of minutes if the existing disposal can be fixed. If the troubleshooting tips don’t work, there is a good chance your disposal is beyond repair. New disposals are relatively inexpensive and easy to install, so even if the old disposal is shot, it’s not the end of the world.

Because a disposal can mash fingers just as easily as it mashes food waste, I never work on this appliance without making sure the power is off. You might simply be able to unplug the disposal from a receptacle inside the cabinet. Otherwise, you’ll need to flip a switch or a circuit breaker. 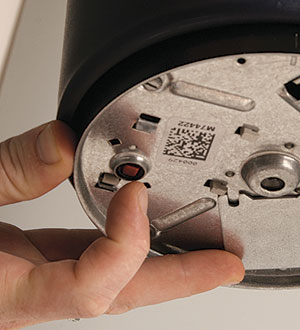 Reset the motor. When the disposal’s motor is overloaded, an internal circuit breaker can trip and shut down the unit. Pressing the red reset button on the underside of the disposal restores power, and the motor might be able to free itself.

Spin the grinding chamber to clear the jam. With the power off, wedge a broom handle against the side of the grinding chamber, and use your hand as a pivot point. Alternatively, some units might accept a Jam-Buster Allen wrench that could free the jam. 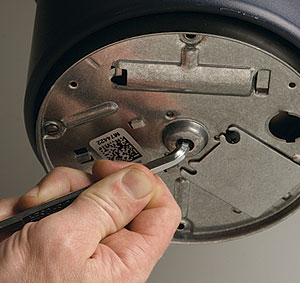 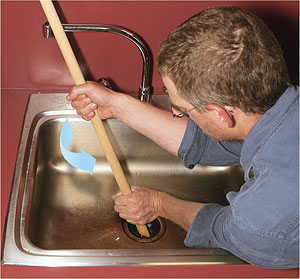 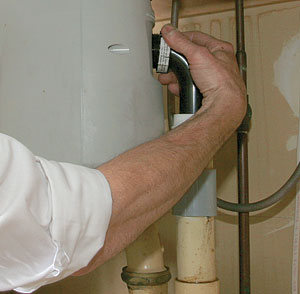 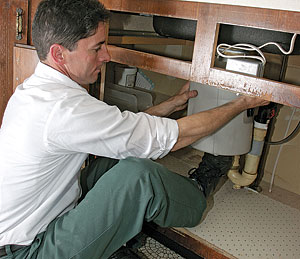 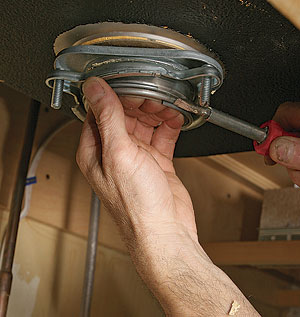 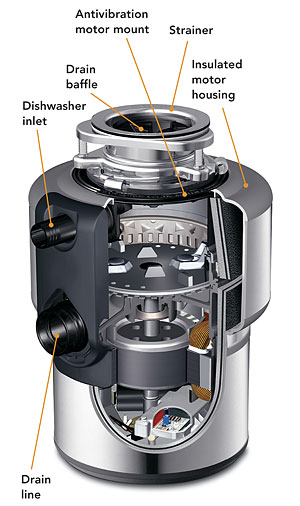 Garbage disposals can pulverize the scraps of food from a fourcourse meal, but they also can grind after-dinner conversation to a halt. The folks at InSinkErator (www.insinkerator.com) have tuned their ears to this problem and are trying to improve the around-thesink ambience. Their 3⁄4-hp Premier model has more-than-adequate power, but also incorporates sound-dampening features like a specially designed drain baffle, an insulated motor housing, and an antivibration motor mount. Available at home centers for just less than $200, it won’t chew up the home-repair fund. 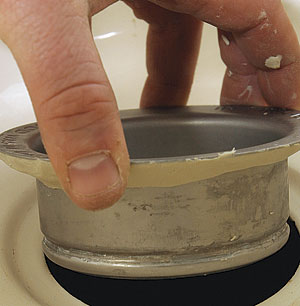 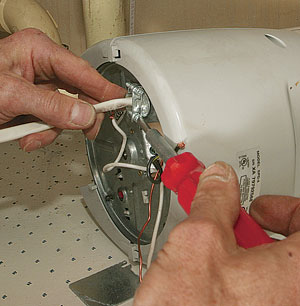 Wire the disposal for power. Whether direct-wiring the power source or installing an outlet plug, the operation is the same. On the bottom of the disposal, firmly secure the ground wire. Then connect like-color wires: white to white, black to black. Push the wires back into the housing and attach the cover plate. 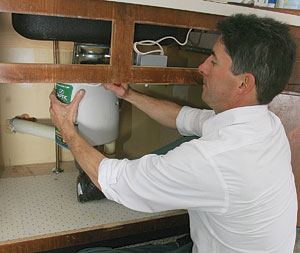 Photos: John Ross, except where noted