With a better entry, a small addition, and a lounge, a great room is born.

Synopsis: Abbie and Jonathan’s Seattle home had a kitchen characteristic of the 1920s: isolated from the first-floor living spaces. Architect Howard Miller designed a remodel centered on two key elements. The first was the addition of a lounge—a small living area close to the kitchen. The second was an 8-ft. by 20-ft. addition that allowed for an uninsulated pantry to be brought inside the thermal envelope; expanded the space available for the kitchen, lounge, and dining area; and improved the connection between the kitchen and the living room.

It was fun to discover that Abbie and I had gone to the same high school — Phillips Academy Andover in Massachusetts — even though I graduated 10 years earlier than she did and we only met recently, here in Seattle.

Abbie and her husband found me on the website of the local chapter of the American Institute of Architects when Jonathan’s work brought them from the Northeast to the Northwest. After living in a small apartment in New York for many years, they bought a 1920s Tudor-style home in Seattle. Though the kitchen had been remodeled in the 1970s, it was still isolated from the adjacent living spaces, a common characteristic of these homes.

There was a time when people wanted their kitchens to be separated from the rest of the house. The work of making meals — and the potential mess — was kept private from the area where friends and family ate and socialized. This is exactly how Abbie and Jonathan’s house had been designed. The kitchen was hidden from the dining and living rooms behind swinging doors. Though it was not small, it was poorly organized and felt cramped. The location of the peninsula made for a tiny workspace, the refrigerator restricted traffic flow, and the range and ovens were breaking down. Worse, the pantry was a shed attached to the back of the house and was not winterized.

Abbie and Jonathan hoped that opening the kitchen up to the rest of the house would allow them to supervise their kids and to socialize with guests while preparing a meal. Because the living and dining rooms have western views of the Olympic Mountains, the couple hoped to bring those views and lots of natural light to the new kitchen, too.

This was all possible, yet the solution wasn’t as simple as taking down the walls that confined the kitchen. Even without the walls, the living room was too far from the kitchen for the cooks to socialize with guests. For this reason, we all agreed to incorporate a lounge into the plan — a small living area closer to the kitchen. And this likely was going to require additional space.

Since we had to address the uninsulated pantry, we decided to take the opportunity to bump the kitchen out with an 8-ft. by 20-ft. addition, creating an open area for the dining table and space near the fireplace for the lounge. This allowed us to turn the kitchen to look through the dining area to the living room as well as to see the lounge and the western view. It also offered the opportunity for corner windows on both ends of the kitchen that, along with a central skylight, provide the kitchen with lots of natural light and cross ventilation. The pantry was relocated inside the house, and a new kitchen office sits just outside the pantry door. 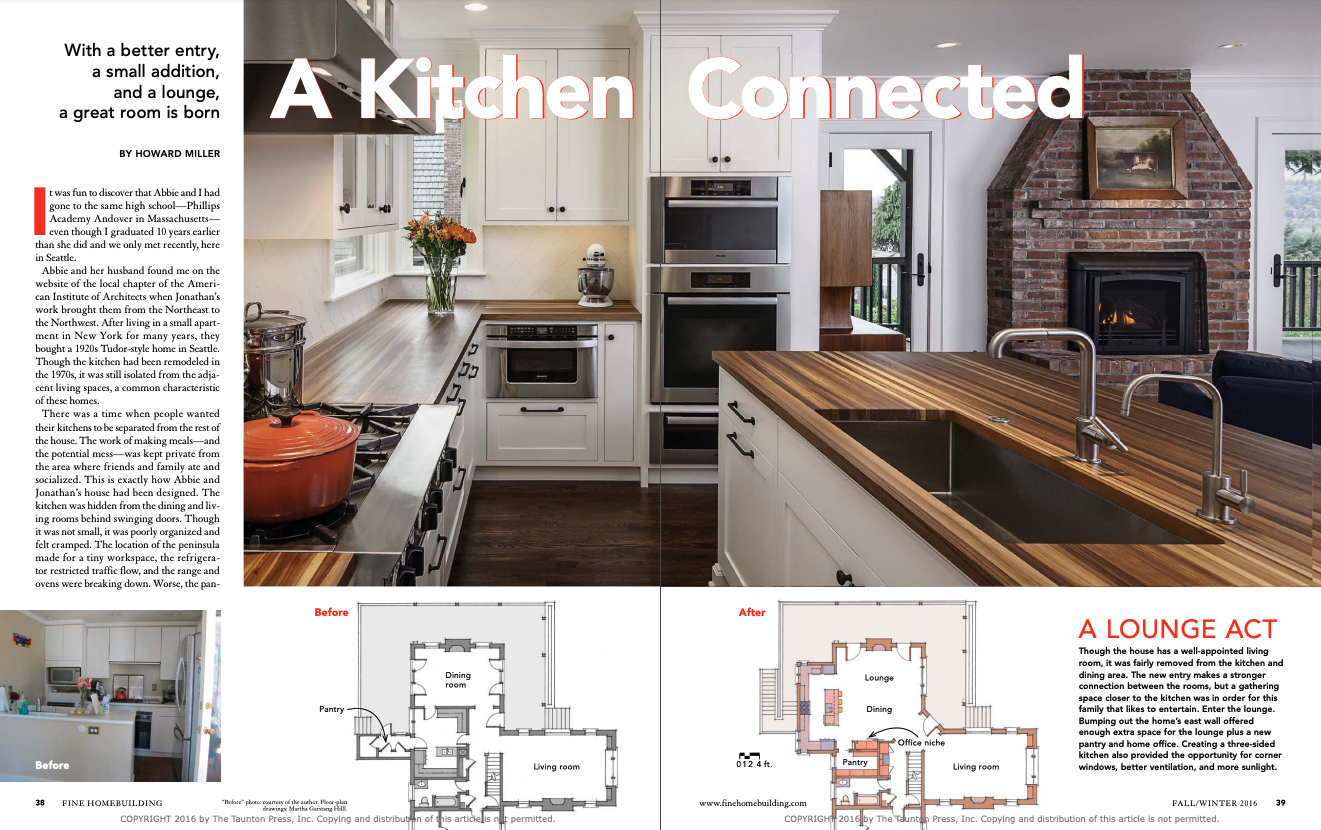