This eclectic kitchen remodel pushes the room as a central hub for the family.

Grace and Dan hired the Austin, Texas, architecture firm I work for to remodel their house, a 1250-sq.-ft. bungalow with two bedrooms and a single bath. With two young boys, they knew they’d soon want more space. The existing kitchen was in good shape, so they planned to leave it as it was.

As the project progressed, however, Grace and Dan had two realizations. First, their kitchen has always served as a central hub for the family. Not only do they use it to prepare meals, but it’s where the boys do their homework and where guests inevitably gather. Second, the existing kitchen was going to look and feel out of place in the remodeled home. We decided to add the kitchen to the scope of the remodel but to preserve what we could, including the general layout, most of the cabinetry (it’s amazing what a good paint job can do), and the white-oak floors. We also chose to highlight an original detail of the house that was hidden until demolition began.

When we started the design, Grace and Dan’s kitchen was already situated nicely between the dining room and a backyard deck that was to be transformed into a screened porch as part of the remodel. Double French doors with sidelights and transoms opened to the deck. On the dining-room side, a beautiful arched passageway connected the rooms. Because these transitions provide connection and daylight, it made sense to keep them intact. The kitchen itself was essentially divided into three zones: the refrigerator and the range on the southern wall for cooking; the sink and the dishwasher on the northern wall for cleanup; and the island, used for food prep, homework, and socializing. The only problem was that the path from the cooking side to the sink could be challenging, particularly when there were people gathering. The solution was fairly simple. We modified the island to incorporate a prep sink. Having lived in this house for many years before the remodel, Grace says that the new prep sink has made all the difference.

We also decided to switch the microwave location from an upper cabinet on the cook’s side of the kitchen to a base cabinet on the cleanup side. This new location keeps the family out of each other’s way, and the new drawer-style microwave is safe for the boys to use.

The north side of the kitchen is on an exterior wall, a perfect place for windows in our hot climate. The existing kitchen, however, had only two small windows. We decided to remove the upper cabinets and countertop pantry, replace the two existing windows with larger units, and add a third window. Not wanting to lose the storage that these upper cabinets provided, we installed open shelving along this wall. In this way, we kept some storage but created a lighter feel. The open shelves make the kitchen feel more spacious and open than before. 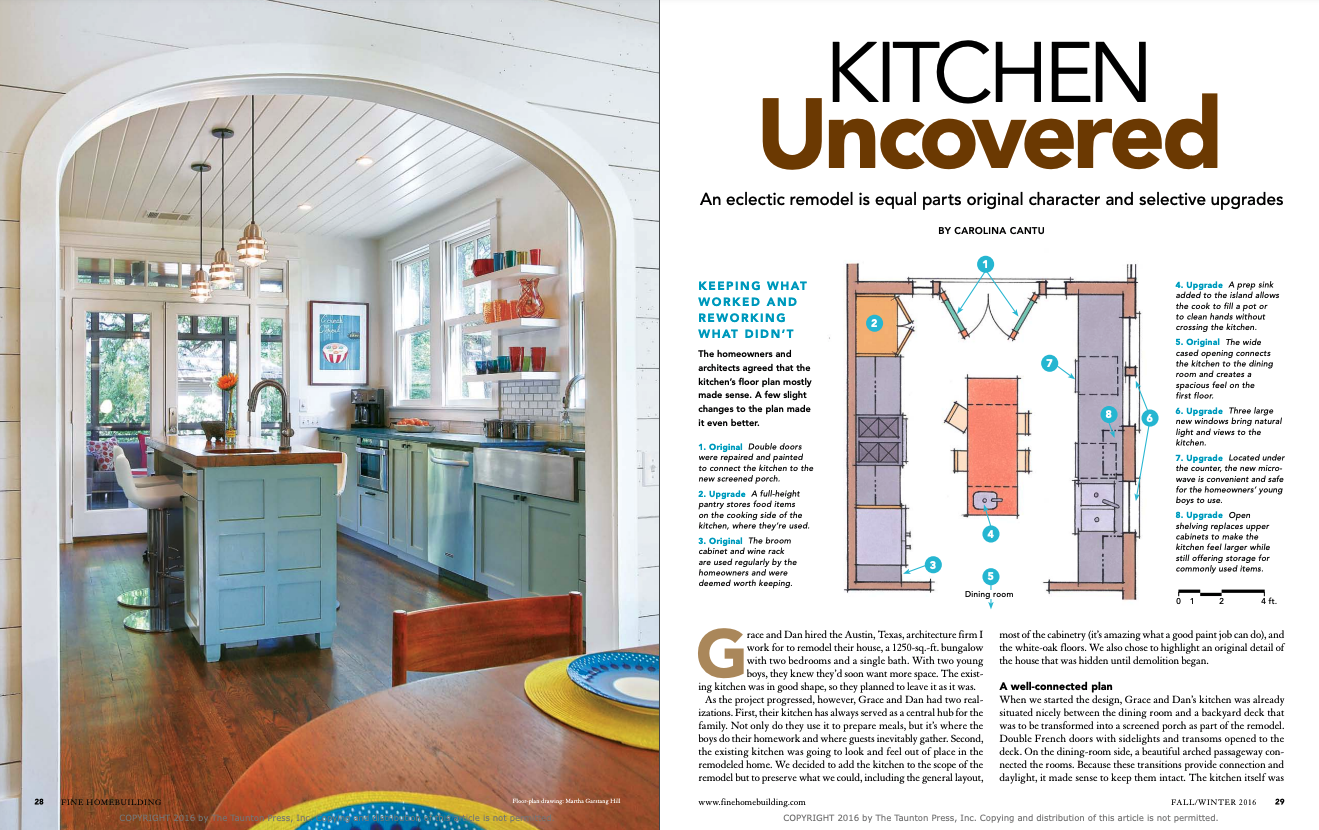 View PDF
Previous: An ’80s Kitchen Is Remodeled and Taken Back to its Midcentury Modern Roots Next: Details from a One-of-a-Kind Kitchen