Before you begin tiling, make sure that you've chosen the right substrate.

Synopsis: When cement backerboard became available in the early 1970s, it became a popular substrate for tile installations because of its imperviousness to water. Although it remains popular, backerboards made of other materials have since come on the market. In this article, senior editor Martin Holladay looks at each of them in turn. Cement is still the leader in water resistance but is heavier than other materials and shouldn’t be used on floors because of its brittleness. Polystyrene backerboard consists of panels of polystyrene (either EPS or XPS) covered in fiberglass and polymer resin. Light in weight but surprisingly strong, it is available in more sizes and thicknesses than other backerboards. It also costs more. Fiber-cement backerboard is similar in many ways to cement backerboard, although it weighs less and is less brittle. Its smooth surface allows it to be finished with paint or wallpaper. Gypsum-core backerboard is lighter than both cement backerboard and fiber-cement backerboard, and it handles much like drywall. Unlike drywall, however, it has a waterproof facing; still, most gypsum-core backerboards should not be used in areas that experience daily wetting.

Forty years ago, ceramic floor and wall tiles were always set in a mortar bed. Then a few builders experimented with gluing wall tiles to water-resistant drywall (aka greenboard), a method that later was outlawed because it led to mushy drywall and moldy studs.

A better solution hit the market in the early 1970s when manufacturers introduced cement backerboard. These panels are impervious to water, so they proved to be an excellent substrate for tiled tub surrounds, shower walls, countertops, and floors.

Since then, several newer types of tile backerboard made from materials including fiber cement, gypsum, and polystyrene — have been introduced. Most of them cost about the same (roughly $10 for a 1⁄2-in. by 3-ft. by 5-ft. sheet), except for polystyrene backerboard, which tends to be more expensive.

There is no consensus among tile contractors about which type of backerboard is best. Each material has its strengths; while one material might be more water resistant, a competing material might weigh less or be easier to cut. Adam Bey-Wagner, a tile contractor in New Fairfield, Conn., is a fan of HardieBacker. “HardieBacker is more fibrous than regular cementboards. There’s not as much aggregate. If you stand up a 3-ft. by 5-ft. piece of Durock or cement backerboard and shake it back and forth, it starts to lose its rigidity. HardieBacker stays stiff. It doesn’t fall apart in water, and it’s mold resistant.”

Tom Meehan, a tile contractor in Harwich, Mass., has a different opinion. “My preferred backerboard, hands down, is Durock,” he says. “It’s lighter than other backerboards, and it cuts beautifully. Durock is as close to Sheetrock as you are going to get. HardieBacker tends to break at the corners, and it’s hard to get an even cut without the $180 shears. Plus, it can’t be installed outdoors or in steam showers.”

Jane Aeon, a tile contractor in Berkeley, Calif., agrees. “I like Durock,” she says. “HardieBacker sucks up thinset, and the thinset sets up too quickly. When you are trying to adjust tiles, you have more time with Durock or WonderBoard.”

As long as you choose a material recommended for the type of location where you intend to install it, any of the materials mentioned here should work well.

Different aggregates produce backerboards with different qualities. PermaBase, for example, includes small spheres of polystyrene that reduce the material’s density. “Once I wanted to put in a soap dish the day after I had set some tiles,” says Aeon. “When I took off the tiles, the PermaBase backerboard just disintegrated. Removing the tiles destroyed the backerboard. That wouldn’t happen with any other type of backerboard.”

Like concrete, cement backerboard is unaffected by water, so it can be installed indoors or outdoors, on floors, walls, ceilings, and countertops. While not susceptible to water damage, cement backerboard is not a moisture barrier, and it tends to wick water. In a wet environment (a shower, for example), it is important to install a waterproof membrane—either on top of the backerboard (when using a liquid-applied membrane) or behind the backerboard—to stop water from reaching the wall studs or subfloor.

Cement backerboard is available in a variety of thicknesses. Thin products (1⁄4-in.- and 3⁄8-in. thick panels) are reserved for use over plywood or OSB and for tiled countertops or floors. For walls, most installers choose 1⁄2-in. or 5⁄8-in. backerboard. While 1⁄2-in. backerboard is suitable for most jobs, 5⁄8-in. backerboard might be specified for heavy tile or to match the thickness of adjacent drywall. The most common panel size is 3 ft. by 5 ft., sized to make quick work of preparing standard tub surrounds.

Some types of cement backerboard, including PermaBase Flex Cement Board, are flexible enough to be installed on curved substrates. Be careful, though; bend them too far, and they will crack.

Installation:  To cut cement backerboard, score it with a utility knife, and snap it like drywall. To cut holes for showerheads, toilet flanges, or other penetrations, carbide-tipped hole saws are an excellent choice. You can also score the circumference of the hole with a utility knife or by drilling a series

of small holes, then knocking out the center with a hammer.

Most manufacturers require installers to leave a 1⁄8-in. gap between adjacent panels; the gap acts as a key for the thinset used to tape the seam. Seams should be taped with alkali-resistant fiberglass mesh tape. Don’t use fiberglass drywall tape, which may not be able to resist the alkali corrosion associated with cement-based mortars.

When installed on a floor, cement backerboard must be set in a 1⁄4-in.-thick support bed of thinset mortar. This leveling bed ensures that no voids under the backerboard can cause deflection.

When setting tile over cement backerboard, use either modified latex thinset or unmodified dry-set mortar.

Polystyrene backerboard consists of panels of either expanded (EPS) or extruded (XPS) polystyrene protected by facings made of fiberglass and polymer resin. Brands include FinPan ProPanel Lightweight Waterproof Backer Board, Schlüter Kerdi-Board, and Wedi Building Board. While the Wedi and Schlüter products have XPS cores, the FinPan product has a core of EPS.

Polystyrene backerboard is offered in a wide range of thicknesses and is suitable for use on walls, floors, ceilings, and countertops. Surprisingly stiff, it is strong enough to be used to build shower benches, curbs, or bathroom furniture, as long as panels of the material are used as “studs” for

Installation: Polystyrene backerboard can be cut with a utility knife. Most manufacturers advise using screws and washers to fasten the panels to walls or floors. For a waterproof installation, treat seams with sealant and waterproof sealing tapes (available from panel manufacturers).

Strengths: Weighs less than any other type of backerboard. It is waterproof and will not wick water, and once the seams are sealed, the panels provide a water barrier. Sheets are also available in more sizes and thicknesses than other backerboards. 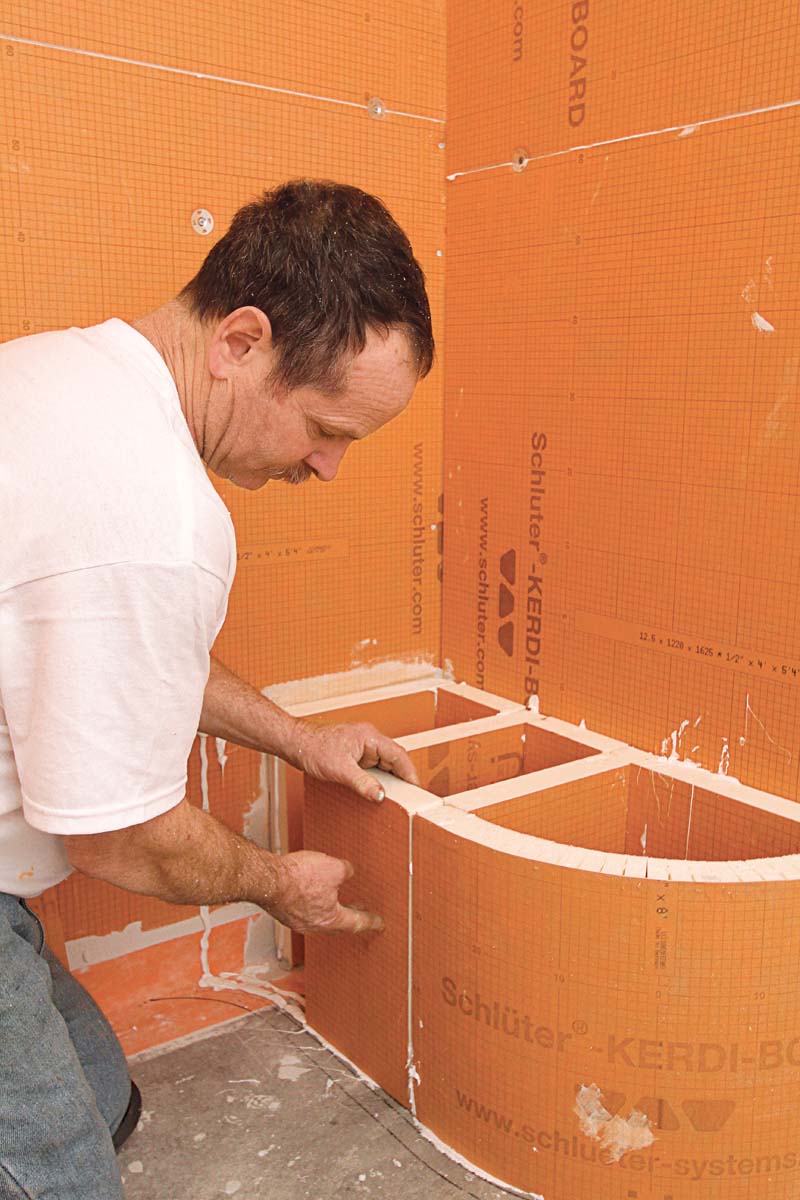 The main brands of fiber-cement backerboard are HardieBacker and CertainTeed FiberCement BackerBoard. HardieBacker comes in two thicknesses: 1⁄4 in. for floors or countertops and 0.42 in. for walls. At about 7⁄16 in., 0.42-in.-thick HardieBacker is a little thinner than 1⁄2-in. cement backerboard, which is one reason why it is lighter (2.6 lb. per sq. ft.).

Installation: Fiber cement can be scored with a knife and snapped like drywall—although noncarbide utility-knife blades tend to dull quickly—or be cut using electric shears developed for cutting fiber-cement siding. Manufacturers recommend that fiber-cement not be cut with a power saw or grinder because such power tools create silica dust, a health hazard.

Fastening requirements for fiber-cement backerboard are the same as for cement backerboard: Use 11⁄4-in. backerboard screws or 11⁄2-in. galvanized roofing nails spaced 8 in. on center. It is sometimes difficult to get screws to sit flush with the dense surface of fiber cement. If you’re having this problem, use nails. Seams should be finished with thinset mortar and alkali-resistant fiberglass mesh tape. Use only latex-modified thinset when installing tiles on fiber-cement backerboard.

Drawbacks: Some traditionalists are reluctant to use products that contain cellulose in a wet environment. However, fiber-cement backerboard manufacturers warrant their products for use in showers and other wet areas.

While ordinary drywall has a paper facing, most brands of gypsum-core backerboard include a waterproof facing (usually a fiberglass mat). Brands include CertainTeed Diamondback Tile Backer, Temple-Inland GreenGlass, and Georgia-Pacific Dens-Shield.

Gypsum-core backerboard is available in the usual range of thicknesses: 1⁄4 in., 1⁄2 in., and 5⁄8 in. The 1⁄2-in. product weighs 2 lb. per sq. ft., making it lighter than cement backerboard or fiber-cement backerboard. It can be used for walls, ceilings, and countertops, but it is not suitable for use on most floors or for any outdoor application.

U.S. Gypsum’s Fiberock is a gypsum-based backerboard that isn’t really comparable to other gypsum-based products. Unlike Dens-Shield, Fiberock has no fiberglass-mat facing. According to the manufacturer, it is made of a “gypsum/cellulose-fiber combination” and is “water resistant to the core.” The manufacturer warrants the use of Fiberock in wet areas like showers.

Installation: Gypsum-core backerboard can be scored and snapped like regular drywall. Fastening requirements are similar to those for other types of drywall: It can be fastened with 11⁄4-in. backerboard screws or 11⁄2-in. galvanized roofing nails.

As with HardieBacker, latex-modified thinset should be used to set tile on gypsum-core backerboard.

Strengths: Relatively light and easy to install; handles much like drywall.

When to back up your backerboard

When backerboard is installed on an exterior wall, should a vapor retarder or vapor barrier be installed between the backerboard and the studs? Unfortunately, there is no simple answer.

First, building codes requiring a vapor retarder—often interpreted to mean a layer of plastic—on the warm-in-winter side of a wall have been changing, and the use of plastic has fallen out of favor.

It’s also important to remember that when a shower is located on an exterior wall, there are at least two potential moisture worries: vapor diffusion and bulk-water leaks.

Manufacturers of cement backerboard generally recommend that a moisture barrier of some sort (WonderBoard calls for #15 felt or 4-mil polyethylene sheeting) be installed behind the backerboard when used in a wet location.

According to some tile contractors, however, this is bad advice. “Plastic is a bad idea because you are nailing it on and putting holes in it,” says Tom Meehan. “When there is plastic, I’ve found mold behind the plastic. It locks any moisture behind it, and the moisture can’t dry.” If you want to waterproof the wall, Meehan recommends the use of a liquid-applied membrane such as Laticrete Hydro Ban or Mapei Mapelastic AquaDefense on top of the backerboard. For a steam shower, he prefers a sheet membrane from Schlüter or Noble.