How to Cut Tile With a Wet Saw

Learn how to make curved, L-shaped, and inside cuts in tile with this essential power tool.

For many simple tile jobs, a cutting board and a pair of nippers are adequate for most cuts. But some tiles, such as glass and some kinds of stone, just won’t cut cleanly on a cutting board. Furthermore, there are many cuts, including curved cuts, L-shaped cuts, and inside cuts, that a cutting board can’t handle.

For these jobs, only a powered wet saw will do. Although they’re messy and noisy (always wear ear protection when running a wet saw), the diamond-impregnated blade cuts tiles cleaner and leaves smoother edges than you’ll get from any other type of cutter. Follow the manufacturer’s instructions for your particular model and always feed the tile smoothly into the blade A.

Some kinds of stone tile—especially slate—tend to spall (shed layers) or flake off small pieces when cut B. This is natural, and there’s little you can do to avoid it. Save these tiles for filler pieces or use them in less visible locations.

A wet saw makes short work of making miter cuts at the ends of either flat tiles or shaped trim tiles, including quarter-rounds used to trim around a sink C, and liners used to create a frame around a tile mural D.

You can use your saw’s miter guide to position the tile for a 45° cut, but we prefer to use a cut field tile as a jig for these cuts. To make a jig tile, mark a regular square field tile diagonally point to point E, and cut it in half F . Set this jig tile against the saw’s fence and use it to position the workpiece for a miter cut G. When mitering quarter- rounds, do not place them flat on the saw’s sliding tray. Instead, support them on edge, so they’re cut in the same position in which they’ll be installed H.

Curved cuts are usually needed around toilet flanges and other pipes. Because the cut edges of the tile are covered by either the toilet’s base or an escutcheon plate, complete accuracy is not necessary. Mark the curve on the tile 1.

First, cut into your tile at each end of the curve on the wet saw 2. Next, make a series of parallel cuts into the waste area, up to the curved line. With softer tiles, you can cut wider strips; for denser tiles, like porcelain, you’ll want to make many closely spaced cuts to reduce the risk of the whole tile breaking 3. The waste strips may fall out as you cut, which is good 4. Once the parallel cuts are finished, use tile nippers (or a hammer) to carefully tap out the remaining waste strips from the tile 5. Finally, use tile nippers to nibble off tile up to the line of cut and clean up the rest of the curve 6.

Shaped cuts are often required when fitting tiles around electrical boxes on backsplashes, for example. Both L- and U-shaped cuts are easily done on a wet saw.

For an L-shaped piece, first, mark out the cut on the face of the tile 1. Continue the lines so that you can clearly see where you will be cutting 2. Now place the tile flat on the saw and against the back stop of the saw tray. Feed the tile into the spinning blade, stopping just short of where the lines meet 3. Carefully back out the tile. Now cut along the second line until the two cuts almost meet 4. Lift the front edge of the tile carefully and cut all the way into first one corner, then the other until the waste piece falls out 5.

U-shapes are made like L-cuts, except three cuts are needed. After marking out the cutting lines, cut the two parallel lines of the U 1. Make the third cut by plunging the sawblade into the face of the tile (most saws have a knob that allows the saw head to be raised and lowered) 2. Lower the blade slowly to make the cut, and don’t cut past the two side cuts. To remove the waste to complete the shape, make a number of parallel cuts close together 3, then break them out with tile nippers or pliers.

On the outside surface of the tile, cover the area to be cut with blue painter’s tape so that you can see your marks. Measure the distance from the edge of the tile to where the cutout should fall and mark the outline carefully. Raise the cutting head of the saw, then lower the blade onto the tile on each of the four marked lines, then plunge-cut along each line, taking care not to cut too deep into the corners 1, 2. If the sides of the cut area are short, and/or the tile is thick, the sawblade won’t penetrate the tile. In this case, transfer your cutting lines onto the back 3 and recut the tile, cutting slightly beyond the corners 4. Knock the waste piece out, leaving the face with a clean cut 5.

To make a large internal cut for toilet flanges or large pipe, mark the circle on the back of the tile 1. Plunge-cut four slots parallel to the edges of the upside down tile, using the edge of the circle as a guide 2. Now cut four slots at 45° angles to the cuts you just made, extending the cuts slightly beyond where the corners meet 3.

Turn the tile face up. You’ll see your previous cut lines. Plunge the blade into each cut slot, extending the cuts until they meet at the corners 4. Overrun the lines slightly as it will make it easier to knock out the center cut. Plunge-cut an X into the middle of the octagon 5, then knock out the center waste by rapping it with a tile nipper 6. 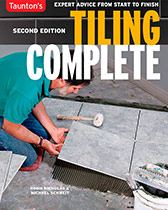 Previous: Cutting Tile on a Manual Tile Cutter Next: Cutting Ceramic Tile with a Tile Saw