I’m ripping up wall-to-wall carpeting and replacing it with hardwood flooring. The 3/4-in. tongue-and-groove plywood subfloor was laid in construction adhesive and fastened with nails, but there is one joint that runs perpendicular to the joists and squeaks along its entire length. I can access the framing from the basement below, so I’m thinking the best bet is to screw some 2×4 blocking to the underside of the subfloor to support the joint. Will this do the trick?

Jimmie M., via “Breaktime”, None

Many builders don’t know that for glued-floor systems, APA-The Engineered Wood Association recommends adhesive not only along the top edges of the floor joists but also along the entire length of the tongue-and-groove joint. The idea here is to develop continuity in the floor-diaphragm structure and reduce wood-to-wood squeaks. In a retrofit like yours, gluing the joints isn’t possible, so your aim is to create glued gussets to help reinforce these areas. To do this, install the 2×4 blocks on the flat, which provides a wide gluing surface.

Your goal is really to “clamp” the blocking to the subfloor and let the layer of construction adhesive (I recommend SF-450 adhesive, made by OSI) do the rest of the work. I advise against your idea of driving the screws through the blocking and into the subfloor from below, however.

As a general rule, when joining materials of dissimilar thickness, it’s not a good idea to screw through the thicker material (2×4 blocking) to attach it to the thinner material (3/4-in. subfloor). First, this approach will mean your screw tips have only 3/4 in. of wood to bite into before they poke up through your subfloor. Second, you don’t want the screw to get hung up in the 2×4 material you’re driving it through rather than the subfloor that you’re trying to anchor it to. When this happens, you get what’s called screw jacking, which actually forces the materials apart instead of pulling them together. Screw jacking is part of the reason why many wood screws (particularly decking and framing screws) have a smooth shaft below the head. It’s also why drilling clearance holes through the material being fastened is usually smart.

Instead, cut the blocking so that it’s a pressure fit between the floor joists, then go upstairs and drive 2-1/8-in. screws through the subfloor into the blocking, pulling it tight. I’ve been happy with McFeely’s line of ProMax deck screws. Back downstairs, tie the ends of those snugged-up blocks into the joists with pocket screws.

While you’re at it, pull any nails you see in the subfloor, and replace them with screws. Screws don’t squeak because they really can’t rub against anything. Driving screws near nails will probably reduce the likelihood of nail squeaks, but why leave that risk in place if you have an opportunity to remove it entirely? 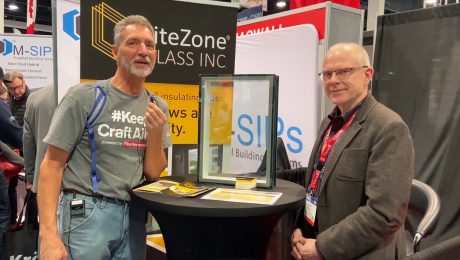 Developed by Canadian manufacturer LiteZone, this spacer system for windows achieves R-values up to R-17.