The Future of Framing Is Here

Smarter strategies can save money, speed construction, improve energy efficiency, and cut down on job-site waste.

We’re extremely efficient at framing houses nowadays, but the way we frame them is extremely inefficient. Inefficient because we use way too much wood. Too much wood not only boosts your lumber bill but it wastes energy as well because more wood means less space for insulation. You can build a perfectly strong house with 40% less wood and increase the R-value of your walls by 50%.

In this article by Joseph Lstiburek, the cofounder of Building Science Corp. in Westford, Mass., you’ll learn about the efficient framing techniques behind these facts and figures. Plus, explore the bones of a house built with efficient framing techniques in the illustrations in the article. Download the PDF (link at the bottom of the page) to read the complete article with sidebars on precautions for seismic and hurricane regions and a tutorial on how to build inset shear panels, which were developed and tested by the author’s Building America team in conjunction with the Army Corps of Engineers.

The Future of Framing is Here

Back in the 1970s, as a young engineering student studying energy efficiency, I wondered, “When the price of oil doubles, will the walls we’re building now look smart or dumb?”

The future lies in better wood products and better use of those wood products. OSB, engineered beams, and I-joists are already common products; in the future, we’re going to get a lot more of these types of products. To use all this “engineered cellulos” simply and elegantly, we need to convince hundreds of thousands of builders that the way they’re building now no longer makes sense. Welcome to my world.

Smarter walls are being built today

As part of the U.S. Department of Energy’s Building America program (www.buildingamerica.gov), our team focuses on the future of housing. Our target is an affordable “net-zero” house (one that produces as much energy as it consumes) built by production builders at no extra cost. Our target date is 2020, but I think that we can do it sooner.

The easy part of our job is figuring out how builders should be framing houses (see our interactive graphic). Thirty years ago, the NAHB Research Center developed optimumvalue engineering (OVE) to cut the cost of houses by omitting unnecessary lumber. OVE framing increases joist, stud, and rafter spacing to 24 in.; places doors and windows on stud layout; and demands that framing members be lined up (or stacked) for direct load transfer. Coupled with better insulation detailing, those same smart-framing strategies also can reduce the cost of heating and cooling houses. 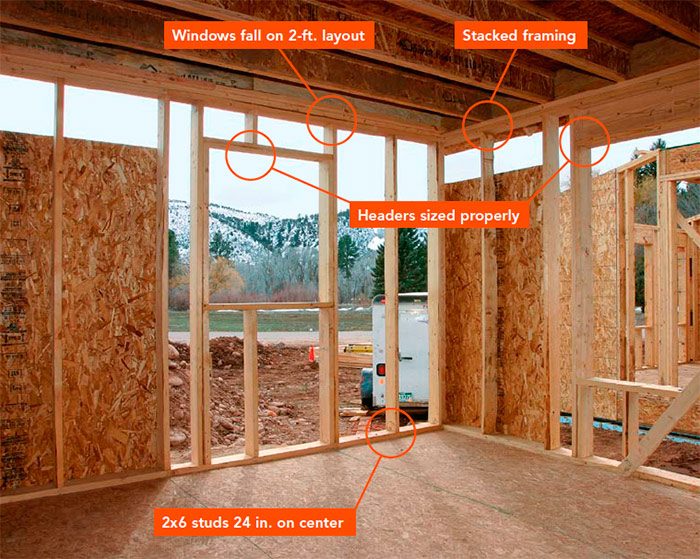 Lining up framing members directly on top of each other shouldn’t be a big deal, but apparently it is because many builders don’t do it. Stack framing makes everything simpler. Connections for high-wind, seismic, and high snow-load areas are easier to detail, and mechanicals are easier to run when floor framing is spaced farther apart.

You have fewer holes to drill and more room to work. Old-school builders may argue that framing on 24-in. centers makes bouncy floors, but if you glue and screw thicker sheathing, you can have a squeak- and bounce-free floor. The extra cost of thicker sheathing is offset by the lower cost of floor framing. Unfortunately, stack framing requires planning. Therein lies the problem.

Design houses to use materials efficiently

Because many materials come in 8-ft. sheets, we should account for that fact in our basic dimensions. We also should slide doors and windows to the nearest stud. As a hypothetical exercise, let’s design two sheds out of OSB and wood studs. One is 8 ft. by 8 ft., and the other is 7 ft. by 7 ft. The materials list and the total cost of materials are the same for both. To figure out the cost per square foot for the 8-ft. shed, divide by 64. The cost per square foot for the 7-ft. shed is 25% higher because we now divide by 49. Which one is faster to build? And which one needs a Dumpster? A 23-ft. 6-in. size makes no sense to anyone except town planners, architects, and designers. If carpet comes in 12-ft.-wide rolls, it is dumb to have a bedroom 12 ft. 4 in. wide.

In the words of renowned Danish woodworker and furniture maker Tage Frid, “wood moves.” Drywall doesn’t like to move. It prefers to crack. The more you attach drywall to wood, the more drywall cracks you’ll have, unless you let the drywall bend.

Remember drywall cracks caused by truss uplift? The solution was floating the corners: Let the wood move and the drywall bend. The same theory reduces drywall cracks at wall intersections and saves a bundle of studs. But don’t just take my word for it. Here’s proof: When we used smart framing with floated corners on a Building America subdivision with a production builder in Chicago, we reduced drywall cracks by over 50%.

Because this builder frames 1,000 homes a year, his savings translate to about $500,000 per year on service calls. Shear strength is a big deal For plywood or OSB to provide shear strength, nails must be far enough from the edge of the panel that they don’t tear the panel when under stress. With a double top plate, the panel can sit flush with the bottom plate and still have lots of “meat” to nail into at the top. Not so with a single top plate on a typical 8-ft. 1-in. wall frame. In fact, it just doesn’t work.

The traditional solution is diagonal bracing, either metal straps nailed to the face of the wall frame or a 1×4 let in to the wall studs. Another solution is a commercially available inset shear panel, popular on the West Coast because of tremendous seismic activity. None of the shear-panel manufacturers we approached was interested in modifying a

proprietary system for smart framing, but the Army Corps of Engineers was. Together, we developed an inset shear panel for 2×6 24-in. on center framing (sidebar right). This panel will be available commercially (www.tamlyn.com) in 2006, but the design and engineering works for site-built applications, too.

What does the future hold?

In the future, building materials will work a lot harder. Foam sheathings will pass water vapor selectively if a wall gets wet. Housewraps will change characteristics depending on orientation, season, and climate. Ballistic housewraps will protect houses from projectiles in seismic and hurricane areas. But smarter materials can’t achieve their potential without smart building. Why aren’t more houses built smarter? Because it’s different.

What we have is an inefficient framing system that we are all doing incredibly efficiently. We need to refocus on a more efficient system. The transition can be in phases to reduce the learning curve, but it still takes about 10 houses for a framing crew to execute smoothly. If you want to change, you will; but with the current building boom, everything sells so quickly that there’s no incentive to slow down your system. When the boom fades, change will take place. Of course, oil at $65 a barrel helps, too. 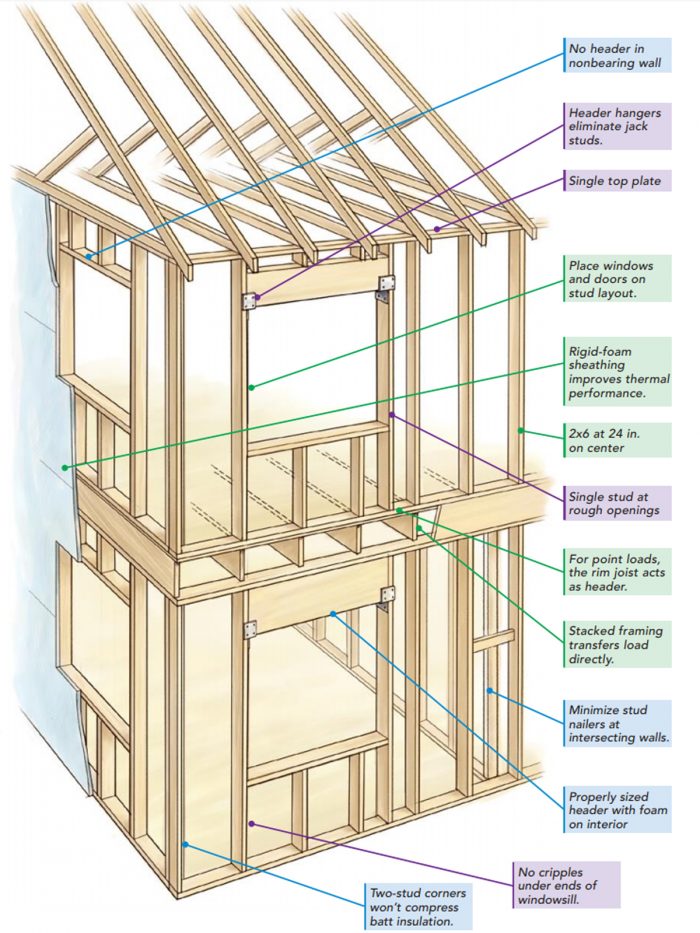 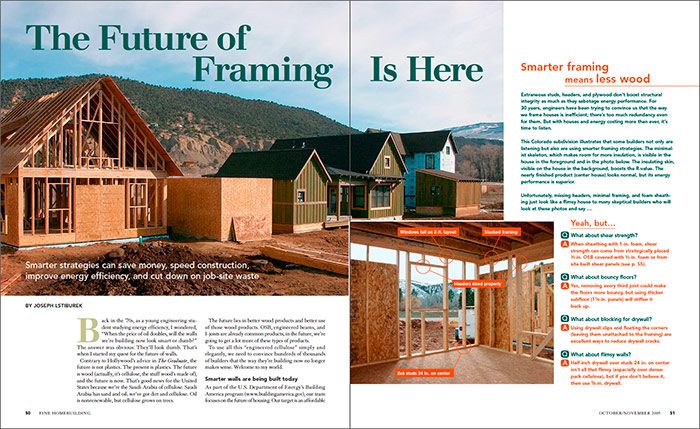 Read the entire article in the PDF link below to help prioritize these material- and energy-saving framing strategies.