Glue and nail the sheathing to the joists for a solid, flat base for wall framing and finish flooring.

When floor sheathing is glued and nailed to the joists, the result is a strong, flat, and stiff structural system. Sheathing also provides a base for the wall framing and the finish flooring. In most cases, carpet and wood strip flooring can be installed directly over the sheathing without additional underlayment.

Deck sheathing is typically plywood or, as it was in this case, ¾-in.-thick tongue-and-groove (T&G) OSB. The T&G edges are on the long sides of the panels so that each course interlocks with the next. The ends of the panels do not have T&G edges, so they must always fall on a joist or on solid lumber blocking.

Take quick diagonal measurements across the joists to make sure the framing assembly is still square. Where this house was built, the building code required that solid blocking be installed in the two outermost joist bays every 4 ft. (another wind-related requirement). Before sheathing began, the crew made layout marks every 4 ft. for the blocking and installed it.

It doesn’t usually matter where sheathing starts, but in this case we opted to start at the back of the house. A chalkline snapped across the floor system 4 ft. from the outer edge of the rim joists served as a guide for the first course of sheathing. To install sheathing, run a bead of construction adhesive on the top of each joist, stopping just short of the chalkline. (Don’t put adhesive on the rim joists because you may have to adjust their position later.) If you spread the adhesive beyond the layout line, it can be a slip hazard (and it gums up work boots something fierce). If you have a large enough crew, one person can spread adhesive as others place sheathing. Otherwise, spread adhesive for one sheet at a time to prevent it from drying out. Remember that a double bead of glue is needed where sheets of sheathing meet at a butt joint.

Carefully drop the first full sheet in place with the tongue facing the rim joist (subsequent courses will be driven into place with a sledge, which would damage the tongue). Don’t just flip a panel haphazardly onto the joists and slide it into position, because this smears the glue and makes it useless. Instead, two people should drop the sheet gently onto the joists as close to final position as possible. Move the sheet slightly to the snapped line and align it to the center of the last joist it lands on. Tack the sheet in place and double-check its alignment before nailing it. Drive nails at the ends of each joist but don’t nail into the rim joist just yet (this happens later). To make sure the joists stay straight, measure from the end of the sheet and nail the first joist exactly on its layout spacing. Now you can hook the tape on the secured joist and nail the rest of the joists at their proper spacing. Many manufacturers now print a centering mark every 16 in. on floor sheathing to make it easier to keep the joists in line.

Install the rest of the sheets in the first row in the same manner. If necessary, cut the last sheet to fit before installing it. This house was 36 ft. long, so a half sheet worked perfectly to complete the courses on the back of the house. Nail off the first course completely (except for the rim joists) before moving to the next course. That course has to be securely in place before the next course can be driven against it. 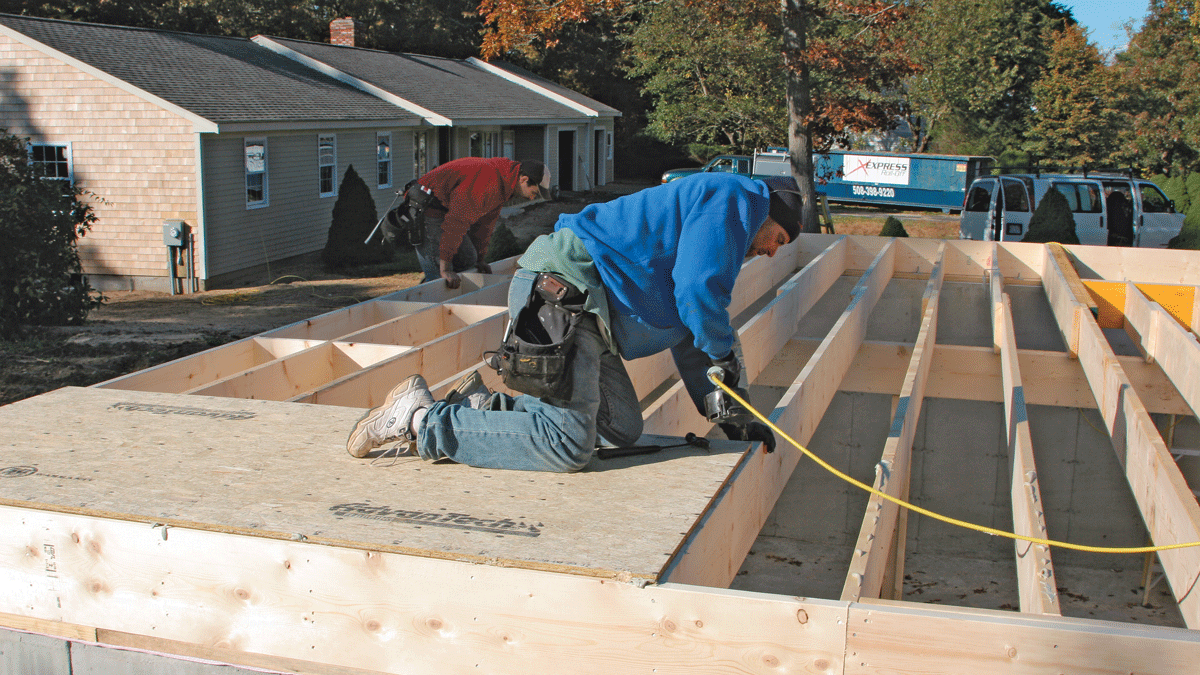 Butt joints in successive courses of sheathing should be staggered so that they don’t line up, and in practice this means offsetting them by a half sheet. So we started the second course with the 4-ft. length of sheathing left over from the end of the first course. Whenever possible, use the factory edge of a cut sheet to butt against the adjacent sheet to provide the tightest fit.

Snap a chalkline for the second course to indicate where the adhesive should stop, then run a bead of adhesive on the tops of the joists and squeeze a bead into the groove of the mating sheet on the first course. Experienced framers have an interesting technique for placing sheets for successive courses. They hold a sheet vertically to start, resting it on the tongue edge. Next they lower the sheet with their arms extended and with one foot up on the lower portion. When they finally let go of the sheet, they maintain pressure with their foot to keep the sheet from bouncing out of position or sliding forward. This process, more ballet than carpentry, effectively gets the sheet ready to be driven into place without smearing the adhesive.

If the sheet bounces out of alignment as you nudge it with the sledge, drive one corner into position and tack it with a nail, then tap along the edge of the sheet until the rest of the tongue slips into place. Pay attention because tapping one end of a sheet can make the other end separate from its neighbor. Before nailing off the sheet, make sure each end seam is tight. If it isn’t, just tap the sheet gently until the gap disappears. Continue adding sheets and courses until you reach the other side of the house. By working one complete course before starting others, you can correct small misalignments before they snowball into big ones.

Once the back half of the house is fully sheathed, start on the front half. However, remember that the floor joists don’t usually run in continuous lengths from the front of the house to the back: They overlap at the support beam. That calls for a slight change of sheet layout. At the start of the first course for the front of the house, simply let the end of the sheet overhang the rim joist by 1½ in. so that the other end will fall properly on the centerline of a joist. You can trim off the overhang later. The alternative? You’d have to nail 2× scrap stock to every joist in order to support the ends of each sheet in that course, a time-consuming and wasteful exercise.

At openings in the floor system (such as for stairs), you can let the sheathing overhang a corner, nail it in place, and cut it to fit later, or you can cut it to fit before nailing it. If you cut first, be sure to resume the course on the other side of the opening in the same pattern and layout as the rest of the floor system.

Most likely you’ll need to rip sheets for the final course of sheathing. If the rip is less than the width of the wall framing that will fall on it (less than 5½ in. for 2×6 walls), it doesn’t need a tongue or groove.

Start the process by sighting the rim joist. If it’s not perfectly straight, plumb up with your rafter square from the framing at each end of the rim, then measure in a couple of inches and snap a chalkline on the sheathing. Now at every third or fourth joist location, place the edge of your square against the rim joist and measure to the line. If the rim needs to move out, pry it with a flat bar. If it needs to move in, bang it with your framing hammer. When the measurement is right, nail the sheathing into the rim at that point (there’s no need to squirt construction adhesive between the two). Work your way down the entire rim in that manner before going back and nailing off the whole rim. If you find a large section where the rim needs to be moved a lot (⅛ in. to ¼ in.), you may have to straighten and nail the rim at each joist location.

On this project, blocking in the outer joist bays kept the rims fairly straight, but sheathing hung over the rims in a few places. So we snapped a line to guide a circular saw and then cut back the sheathing before straightening and nailing off the rims.

Previous: Save Time with Factory-Framed Floors Next: Installing a Subfloor