A peel-and-stick membrane under the flashing guarantees that the skylight won’t leak—ever.

Synopsis: Skylight installations can be fraught with concerns, not the least of which is introducing the potential for water leakage and subsequent related problems (mold, rot, damage). Contributing editor Mike Guertin shares his technique for installing a skylight, which promises no leaks with the use of a peel-and-stick (or self-adhesive) membrane under the flashing. Guertin’s step-by-step method begins with creating the opening for the skylight. Next, he installs the peel-and-stick membrane. Finally, he installs and flashes the skylight. Although the project featured in the article is a retrofit, Guertin says that the process is the same on a new house.

I used to worry every time I installed a skylight. Even with the best installation detailing, I could still expect a storm to hit from just the right direction and drive water behind the flashing. When I discovered peel-and-stick membranes, my worrying days ended. Now I follow a series of simple steps that hasn’t failed in more than 15 years’ worth of installations. The key to success is integrating the membrane and the flashings with the shingles to direct water back to the surface of the roof. Although the project shown here is a retrofit, I would flash it the same way on a new home.

This project called for adding two 22-in.-wide skylights (for 24-in. on center framing) into rafters spaced 16 in. on center. To support the opening and tail rafters, I sistered the inside face of the existing rafters to close the overall opening down 3 in. more. Then I positioned the skylight up the roof plane so that the opening would be centered on the interior room’s ceiling. I framed the skylight openings from the inside.

Cut the opening one layer at a time 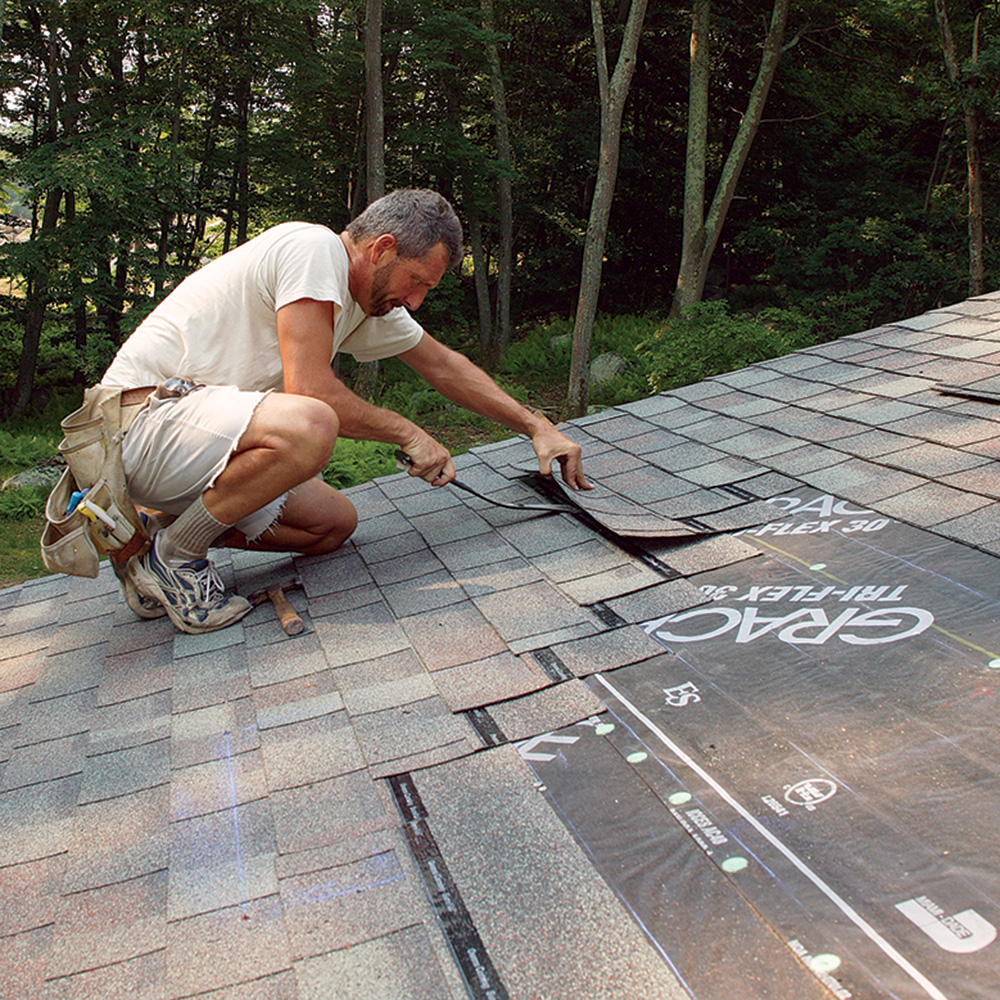 With the rough opening framed, the easiest way to locate the skylight on the roof is to stand inside and drive screws up through the sheathing and the shingles at all four corners. Then I can go out and snap chalklines between the screws to mark the location.

To start the hole, I strip back the roof shingles, beginning three courses above the top of the skylight. To free the third course, I pull the nails at the center and at the course above. A carefully inserted thin flat bar breaks the shingles’ self-adhesive strip and wedges up under the nails. It’s easier to separate the self-adhesive strip when the shingles are cool. In hot weather, I break the seal early in the morning before the sun has hit the roof. I remove full shingles to the next joint left and right of the skylight opening rather than cutting them in the middle.

Once the upper course of shingles is done, successive courses are easier to remove because the nails are exposed; just pull the nails and separate the self-adhesive strip. I remove shingles until I reach the course whose top edge is within 2 in. above or below the bottom line of the skylight opening. I save the shingles I’ve pulled to reuse around the skylight.

With the shingles removed, I snap chalklines between the screws to outline the skylight location, then remove the screws. Inside, I staple plastic over the skylight opening to contain the dust. Then I go back to the roof, where I use a circular saw to cut the roof sheathing.

After I’ve swept the roof, I separate the glass portion of the skylight from the frame and install the frame per the manufacturer’s instructions. I prefer to remove the glass from the frame to reduce the skylight’s weight and to cut the chance of scratching the glass, and to make it easier to run the peel-and-stick membrane to the top of the frame.