You have two basic layout choices: a racking pattern or a pyramid pattern.

The two most common patterns are the racking pattern and the pyramid pattern. Each pattern has advantages and disadvantages for installation speed and the resulting appearance of the roof. You’ll probably find one pattern or the other will work better on certain styles and pitches of roofs or with different types of shingles.

The racking pattern is controlled by two or more chalklines running up the roof plane perpendicular to the eaves and ridge. The joints between shingles in successive horizontal courses are offset from one another from one another by one half a tab width, but other offsets can also be used that appear to randomize the shingle joints. The shingle joints in the racking pattern alternate back and forth as the shingles go up the roof. Because some roofers work from the eaves up to the ridge installing shingles straight up in columns rather than running out courses horizontally, this pattern is sometimes called “straight up” or “column.”

The layout process is fairly easy for the racking pattern. A major advantage is that the racking pattern does a better job of keeping cutout slots in three-tab shingles aligned than the pyramid pattern does. When you install three-tab shingles, you need to keep the cutout slots between the tabs in vertical alignment between successive courses because when the slots drift out of alignment, the roof looks unprofessional.

Roofers often snap vertical control chalklines for the racking pattern in the middle of a roof section. Then after running the first column of shingles up the control lines, workers can install shingles to the left and to the right from the starter column. This enables more workers to coordinate their efforts. 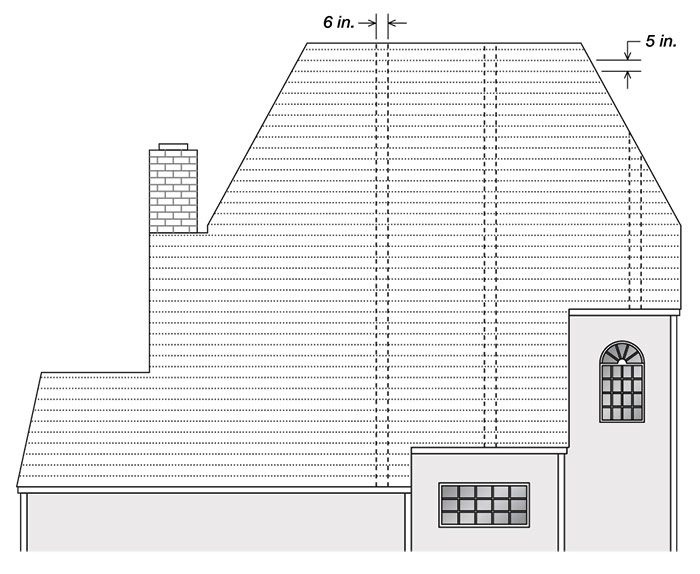 On the downside, the racking pattern has some annoying installation quirks. Installing shingles vertically from eaves to ridge requires that you skip the last fastener at the end of every other shingle in order to slip the shingles from the next column beneath. As you work your way up each additional column of shingles, you have to lift the loose end of every other shingle in the previous column, slip the end of the new shingle beneath it, and drive a nail (see the photo below). It’s hard to hold up the loose end and keep the new shingle from slipping out of position while driving a nail.

Once the loose end is flopped down, you have to drive that skipped fastener at the end of the shingle on the previous column. The whole process slows production a bit, and lazy installers often neglect the fastener under the loose shingle end. The bad habit of skipping one fastener on every other shingle is called “cheat nailing,” which can lead to shingle drooping (where one end of the shingle slips downward) and blowoffs.

Another disadvantage of racking a roof is the zipper appearance that the pattern can display in the finished roof. The shading of the surface granules on many color-blended shingles is supposed to create a random shading effect across the roof. When individual shingles are offset in a regular pattern from eaves to ridge, the shading randomness can be lost and can actually highlight the back and forth, zigzag look of the pattern (see the photo). This frequently happens when shingles from different lot numbers are installed on the same roof plane.

The racking pattern can also be revealed when the cutout slots at the joints between shingles appear wider or narrower than the ones stamped out in the middle of the shingles. As shingles age, they can shrink and the edges curl, especially organic felt shingles. The shrinking makes the slots where the ends of shingles meet appear wider, and the ends may be more likely to curl.

When joints are staggered at regular intervals up the roof, the undesirable zipperlike effect is highlighted. This can also happen when manufacturers miscut shingles or the installer doesn’t butt the shingles tightly together. In any case, the installation pattern is exposed and detracts from the overall appearance of the roof. Some shingle manufacturers advise against using the racking pattern for these reasons.

Laminated shingles and other random shingle styles shouldn’t be racked. There is no slot control required, so there is no advantage. And racking will betray a pattern in a style of shingle where you don’t want one.

The pyramid pattern is also known as the 45-degree or diagonal pattern. This is because it works up the roof as a diagonal instead of going straight up the roof like the racking pattern. The angle is rarely a true 45 degrees, but it does appear that way from a distance no matter what the offset. The roof shingles are typically started along one rake edge with ends of shingles in successive courses staggered diagonally to form the appearance of one side of a stepped pyramid. 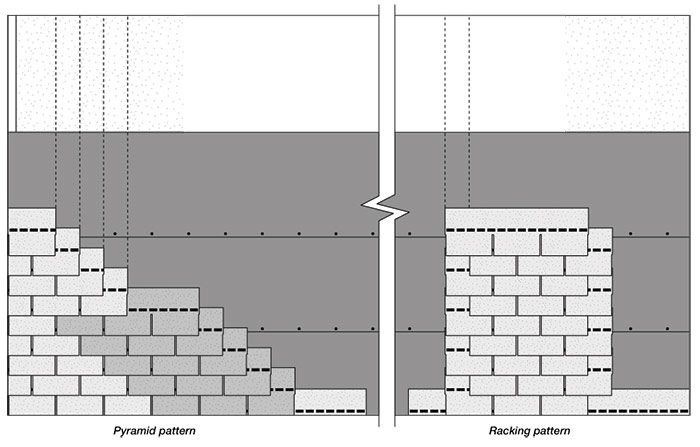 There are several advantages to using the pyramid pattern. Once you get the pyramid started, shingling goes quickly. You can work up a roof at a diagonal or left and right horizontally. Since there are no back-and-forth offsets between courses as with the racking pattern, you don’t have to struggle with lifting the ends of shingles and driving fasteners. This speeds production considerably.

The eaves-to-ridge zipper effect is eliminated too. Sometimes a diagonal zipper can develop, but it isn’t as obvious as a straight one. The pyramid pattern is the preferred installation pattern for laminated and other random-appearance shingles. Many manufacturers recommend a modified pyramid pattern where the offsets between shingles aren’t equal measurements but random themselves. Rather than equal 6-in. offsets, they may recommend an offset of 7 in. for the first course, 9 in. for the next, and then 5 in. This increases the randomness of the roof shingles and reduces the chance a diagonal zipper will show up.

The drawback to the pyramid approach is that it’s more difficult to control the vertical orientation of cutout slots in three-tab shingles because you need more vertical control lines. The pyramid-shingle pattern is typically begun along a rake edge and continued across, but it can be started in the middle of the roof too. The diagonal progresses up the roof and moves horizontally with the addition of each horizontal course. If the slots of the initial shingle in a course aren’t set precisely, the whole course will be off. To control tab slots on a pyramid pattern accurately, you need to snap six or seven vertical control lines rather than the two needed for the racking method.

There is a way to use the pyramid pattern without vertical control lines. To do this, use a 5-in. offset with three-tab shingles. With a 5-in. offset, slots in successive courses only repeat vertically at every twelfth course. That’s 5 ft. up the roof, so any deviation in the slots won’t be noticeable (see the photo below).