What's the most dangerous tool that you work with? If your first thought is a power tool—probably a tablesaw—then the answer might surprise you.

If I asked 10 builders which tool they considered the most dangerous, I bet most would name the tablesaw. With close to 60,000 injuries each year and lots of media attention, the tablesaw is certainly a well-publicized candidate. I doubt anybody would pick their extension ladder.

However, every year there are about 160,000 ladder injuries, 300 of which are fatal. That’s nearly three times the number of tablesaw accidents and has shown a 50% increase in a 15-year time period.

It’s not that ladders are complicated to operate. In fact, I could teach a newbie how to use a ladder safely in half the time that it would take me to demonstrate the ins and outs of a tablesaw. Ladders are dangerous because their simplicity makes people overconfident, and overconfidence can quickly lead to carelessness.

The steps shown here are part of the American Ladder Institute’s (ALI) guidelines to setting up and using an extension ladder safely. There are also dozens of accessories—leg levelers and standoffs, for example—that can make a ladder even safer. For additional information on safety, including the proper use of stepladders, visit www.laddersafety.org.

A safe setup starts on the ground 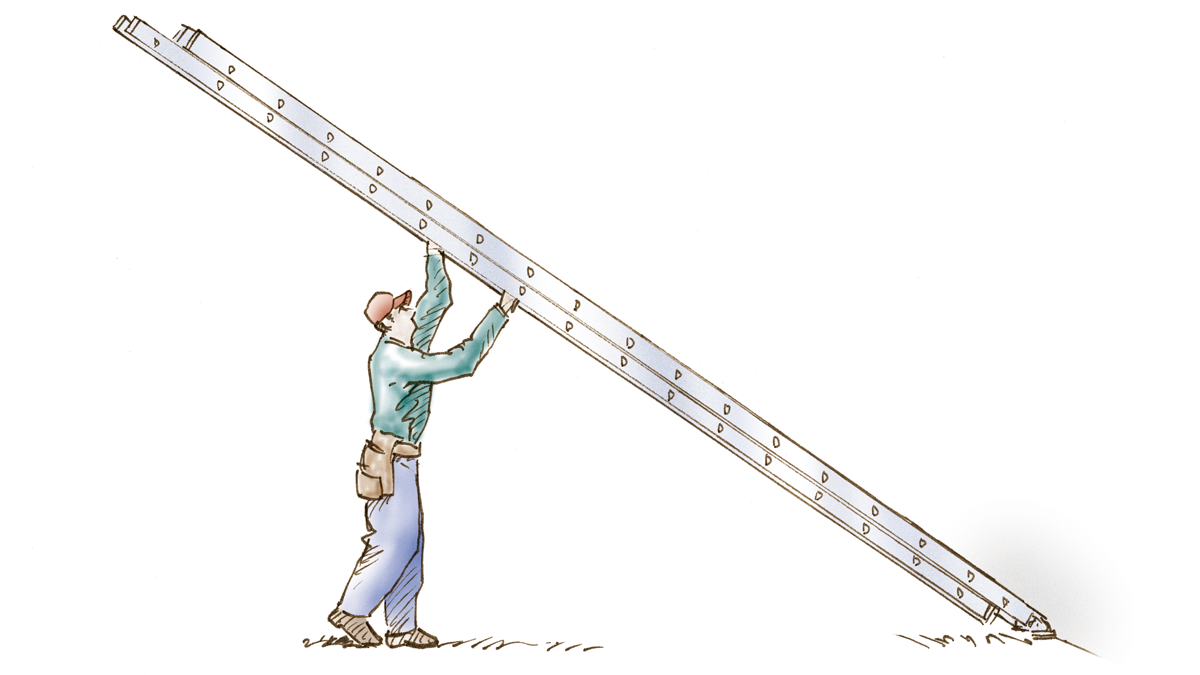 1. Lay the ladder flat on the ground so that its feet are toward the wall. Lift the far end of the ladder and walk it up, one rung at a time, until it’s vertical. 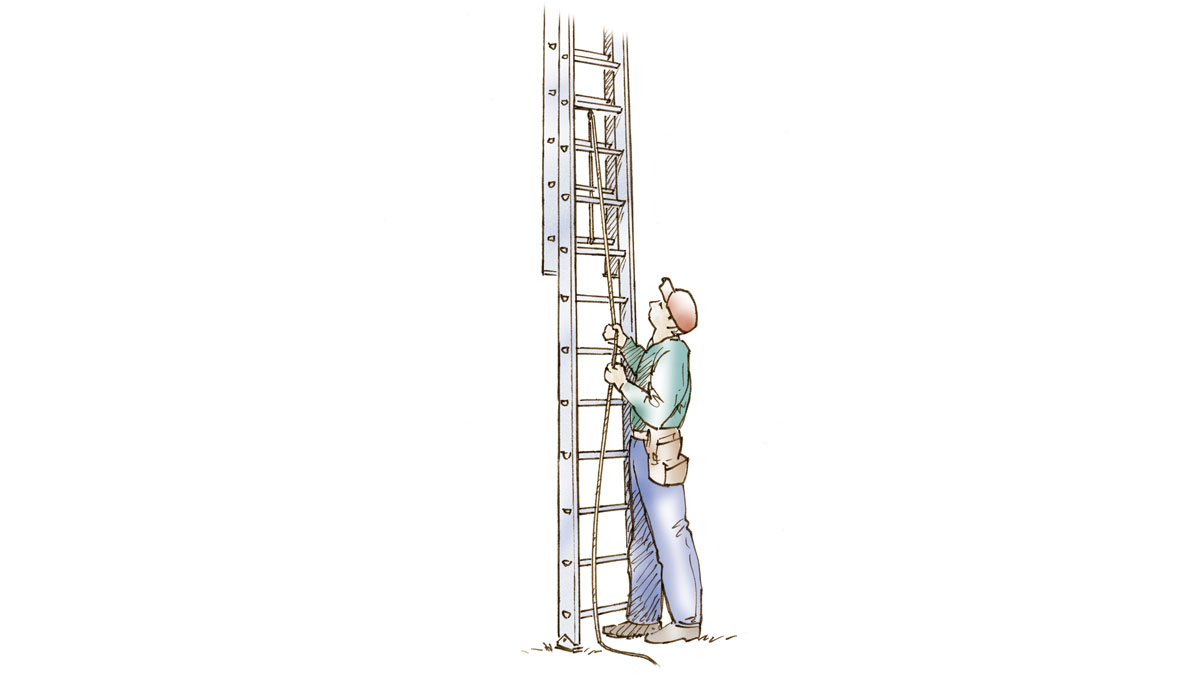 2. Stand so that you are between the ladder and the wall, facing the ladder. Keeping the ladder vertical, raise the upper section one rung at a time. Ladders with a working height above 16 ft. will have a pulley rope. 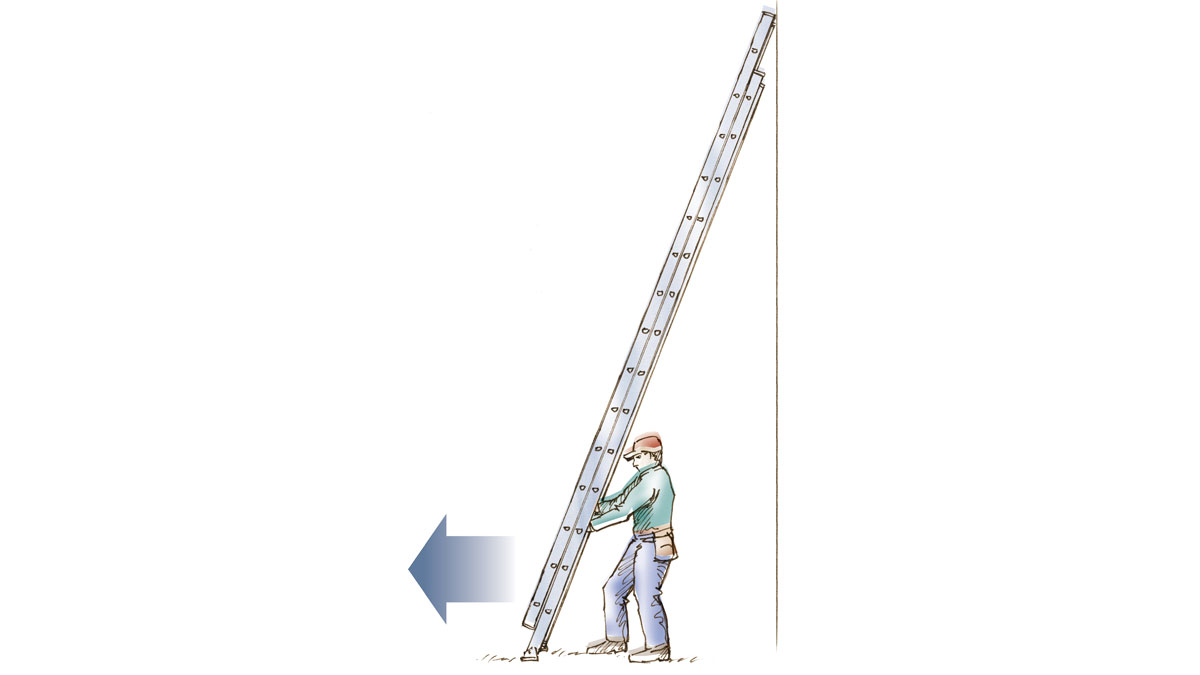 3. With the top of the ladder against the wall, walk the feet out and set them firmly using the rubber side for hard surfaces and the sharp side for soft surfaces. The ladder is at the proper angle when its base is 1 ft. out from the wall for every 4 ft. of vertical rise to the point of support, which varies depending on whether the ladder is resting on the side of the house or extending beyond the eave of the roof. 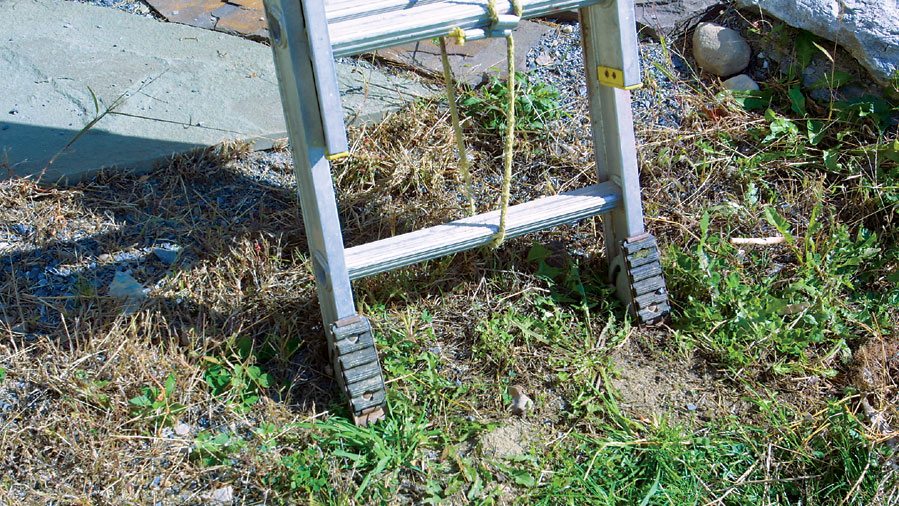 Quick way to check the angle 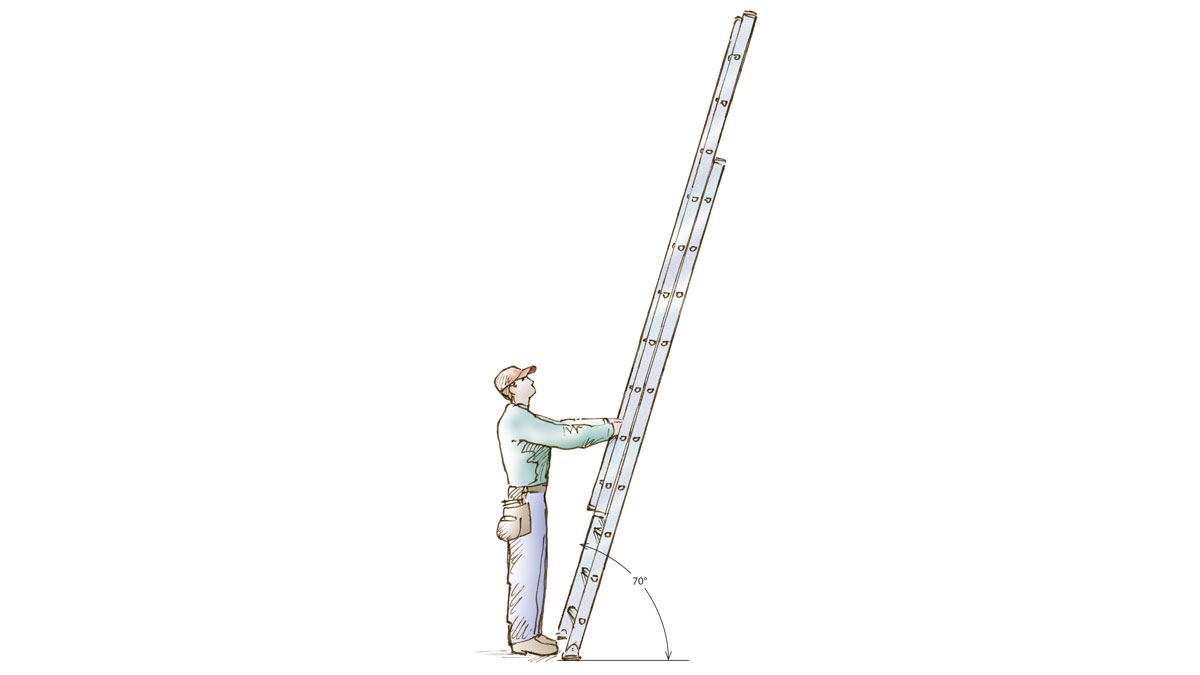 If math isn’t your thing or if you just want to double-check that the ladder is at the proper angle before climbing, there is a simple method. The angle is correct when the palms of your hands can be laid flat on the rung closest to shoulder height, with your toes touching each rail and arms outstretched.

Common sense will keep you safe

When set up correctly and used with a healthy respect for its tolerances, an extension ladder is stable and safe. Here are three golden rules to keep in mind. 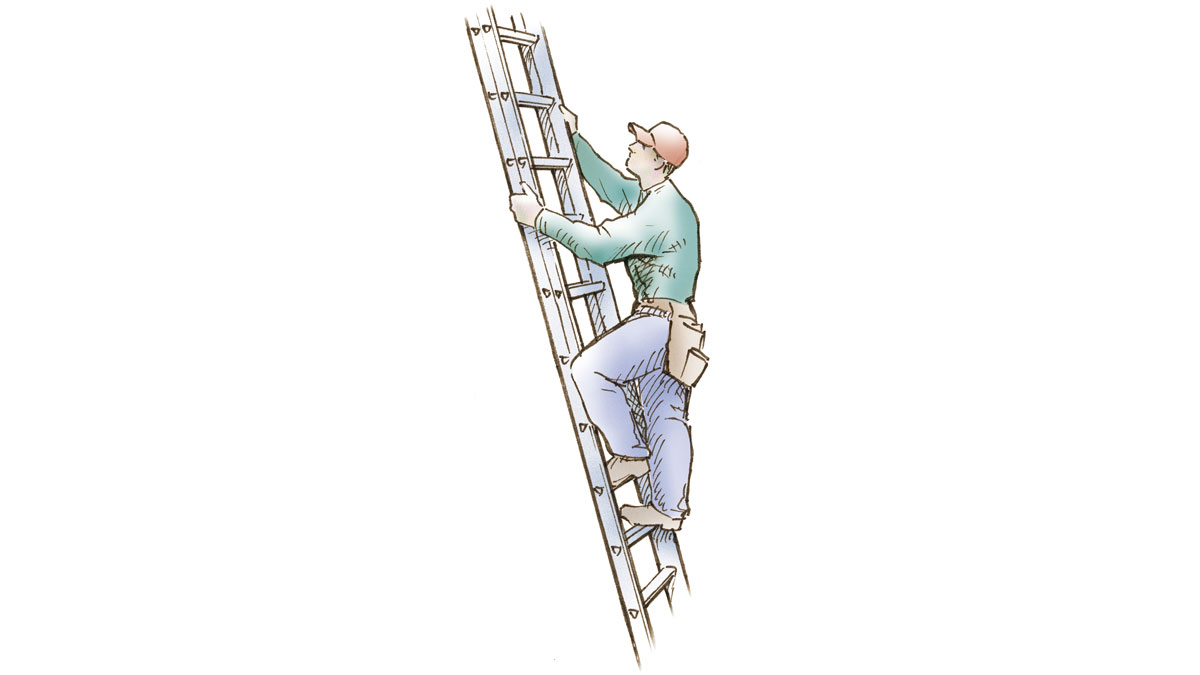 1. Grab the rails. Rather than grabbing one rung at a time as you ascend or descend a ladder, slide your hands on the rails. This frees you to focus on your footing and also maintains three points of contact on the ladder if you are carrying something in one hand. Always face the rungs when you climb up or down. 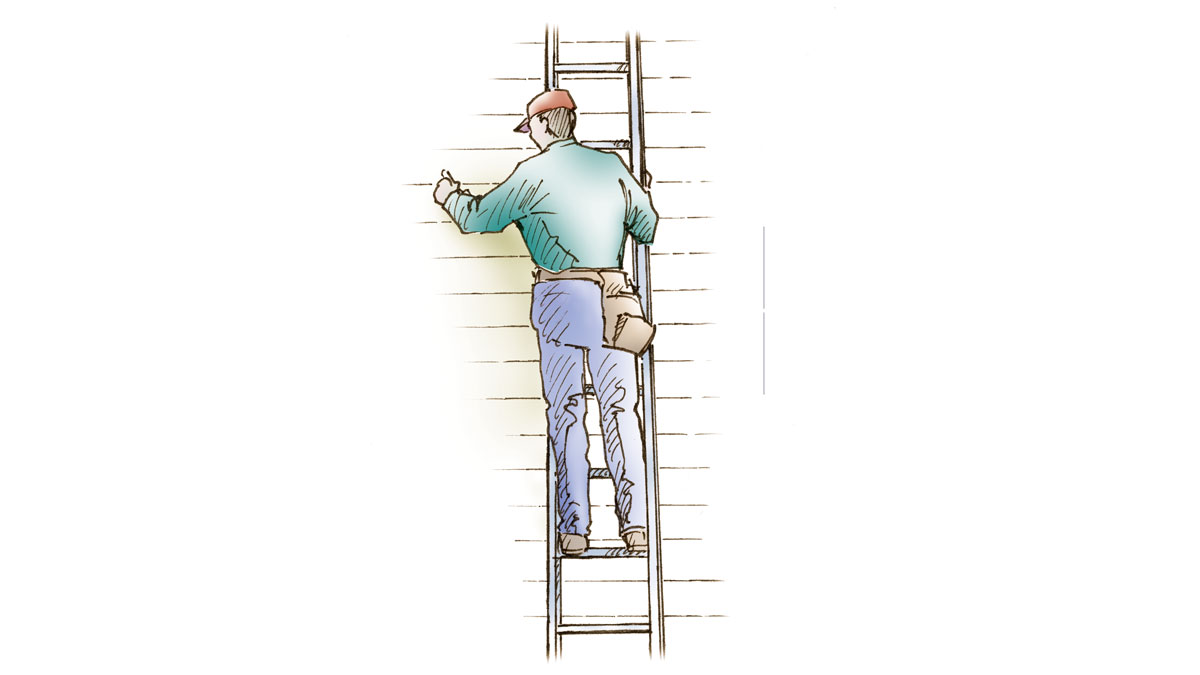 2. Stay centered. Ladders aren’t immune to the laws of physics, so the best way to keep them vertical is to keep your body centered between the two rails and never to stand on the top three rungs. If your belt buckle goes outside the area between the rails, you’re reaching too far. It’s never too much hassle to climb down nd move the ladder over 3 ft. 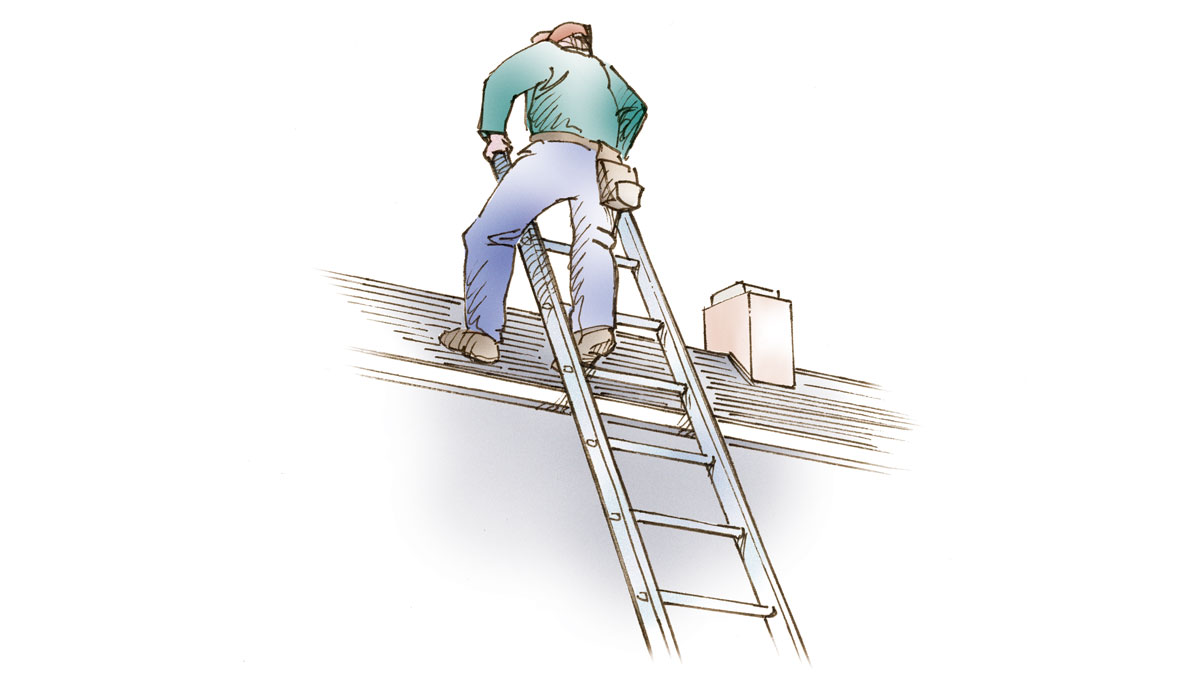 3. Extend beyond the roofline. One of the most dangerous transitions is climbing off the ladder and onto the roof, or vice versa. To do this safely, the top of the ladder must extend 3 ft. above the eave of the roof, and should be tied off securely whenever possible. Always step off the side of the ladder onto the roof; never climb over the top.

Letter to the Editor

Don’t step above the roof

I am a retired New York City firefighter, and during my 26 years with the FDNY, I instructed new firefighters on using portable ladders. Your article on ladder safety in the October/November 2010 issue covered many of the ladder basics I taught over the years. I have some concern, however, with illustration #3 on p. 92 (pictured above).