What’s the Most Durable Grout?

Synopsis: Peter Yost, Green Building Advisor‘s technical editor, believes we should all be doing our own product testing. Tired of using porous, easily stained latex-based cement grout, Yost tried epoxy grout in his own kitchen; years later, he used polyurethane grout in his shower. In this article, he shows the results of different cleaning products on stains formed on both the epoxy and polyurethane grout, and describes the lack of knowledge about polyurethane grouts despite what he sees as superior performance.

I was a full-time remodeler from 1983 to 1991, and during that time, one of my older brothers, Izzy, taught me how to lay ceramic tile. I really liked the combination of physical work and craft, and the beautiful finished result. My brother and I agreed that it seemed out of whack to lay color-­fast, durable, water-impermeable tiles and then surround each one with porous, easily stained grout. Latex-based cement grouts are easy to work with and can be sealed once they have cured, but it seemed like most of our work with this material—and everyone else’s—had dirty, cracked grout lines down the road, especially in high-stress areas like mudrooms, kitchen counters, and showers.

So, we tried epoxy grout from Mapei. Anyone who has used two-part epoxy grout, even the newer versions with detergents in the formula, knows how difficult they can be to work with: the short pot life means you have to really keep to a pace—you do not want to have to try to remove grout film that has even partially set on the surface of tiles. Epoxy grout is a pain for installers. The tradeoff is that it is way better for your clients. It’s strong and nearly stainproof, yet it remains flexible.

With that knowledge and experience in mind, when we remodeled our kitchen back in 2003, I used epoxy grout for the two tile counters and backsplashes at the sink and side cabinets. Over time, food and water caused discoloration right along the sink, with some light, almost white spots in the grout between courses of tiles.

In part because of this staining, I went looking for a different grout to use when I tiled our downstairs shower stall and floor in 2011. The owner of a local flooring store who was doing a lot of ceramic tilework in his own home strongly recommended a polyurethane grout, Bostik Quartzlock2. (While Quartzlock2 has since been discontinued, Bostik currently sells two other polyurethane grouts). He swore that this grout had all of the advantages of epoxy grout—durability, color-fastness, and stain resistance—without the installation challenges. Polyurethane grout is a one-part mix that has really long pot life and does not bond to the tile surface if you leave any grout film for an extended period of time.

I went to three local flooring retailers looking for information when I decided to write this article, and not one of them could tell me of a single tile job that used polyurethane grout. Two stated that they can’t even get local installers to use the better-known epoxy grout, much less polyurethane. One retailer told me, “It’s just too much harder to install than latex-modified cement grouts, and too expensive. The only time our installers use it—and not without a lot of groaning—is when it’s called for on commercial jobs.”

Almost nine years later, there are some stains on the polyurethane grout in our shower, but it is quite different from the epoxy grout discoloration to the right of our kitchen sink. I think I might know why after reading a tech sheet I found on tile in commercial kitchens from Mapei. Oleic acid in fats left in sustained contact with the grout is especially challenging, and something we were not aware of when we chose the product.

Though both epoxy and polyurethane grouts are far more durable than more commonly used alternatives, neither has proven to be completely stainproof. Wondering how they would clean up, I did some experimenting. I treated both the kitchen sink epoxy grout discoloration and black spots on the polyurethane grout with two different cleaners—Soft Scrub, as recommended by Bostik, and my own idea—OxiClean Max Force stain remover. I know that this cleaner is targeted for fabrics, but it has worked well for us to remove stains without damaging the substrate on more than just clothes. In each case, I applied the Soft Scrub and OxiClean generously to three different places (as shown in the ­photos on the facing page), leaving the cleaners to sit for 15 ­minutes before scrubbing each with a toothbrush, wiping them clear, cleaning and rinsing them with water, and then drying them with a hair dryer.

The epoxy grout staining around the sink showed only minor improvement after each cleaner was used. The discoloration was not much better after being treated with OxiClean; after scrubbing a portion of the counter with Soft Scrub, the results were more acceptable, particularly as the grout has been in place more than 17 years. It could be that more elbow grease is as important, if not more so, than the type of cleaner used. After using Soft Scrub on the entire kitchen-sink counter, and letting it throughly dry, the discoloration is less noticeable, but not gone entirely.

In the shower, the Soft Scrub pretty much eliminated the black spots on the polyurethane grout, doing a much better job than the OxiClean. And in general, after nearly nine years, our polyurethane grout is in really good shape. If I had to do any of this over again, I would use polyurethane grout without hesitation. I found it far easier to work with—plus, it appears to be holding up better than the epoxy grout, and it cleans easier.

If you follow my Wingnut Testing adventures on Green Building Advisor, you know that I am very curious, and that I believe all of us in the building industry need to be doing more personal product testing. It’s hard to be scientifically accurate when testing at home, but we should try the best we can to understand how materials and assemblies perform through observation, monitoring, and tests. Without such testing, I never would have learned that a little-known product would be my go-to for durability and cleanability in high-stress areas.

Peter Yost is technical director at Green Building Advisor. He is also the founder of Building-Wright, a consulting company in Brattleboro, Vt. Photos by the author, except where noted. Opening photo by Justin Fink. 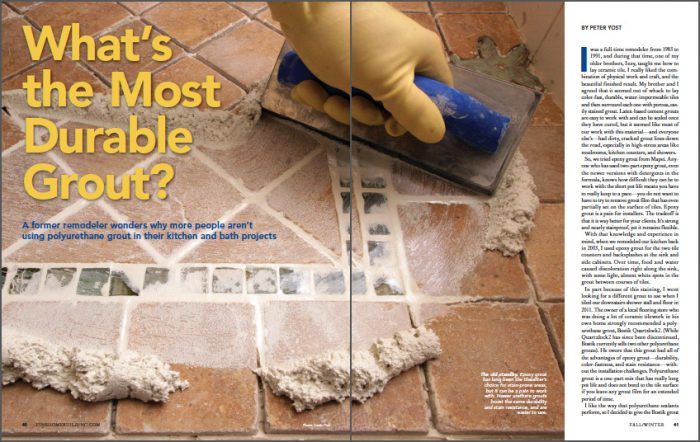