An ­electrician shares the ­basics of ­bending, ­fastening, and ­connecting electrical ­metallic tubing to run wire in for new electrical circuits.

After buying a fixer-upper north of San Francisco, a carpenter friend of mine wanted to install a workbench in the garage to tackle some projects. The problem was, there weren’t enough outlets to make efficient use of the space. When he asked me for help, one solution immediately came to mind: surface-mounted boxes connected by electrical metallic tubing, referred to as EMT.

Although the sleek, industrial look of EMT is finding a niche in industrial interiors, where it’s used as a design element to add interest to a room, it’s mostly called upon for its low cost, durability, and ease of installation. It has become a standard for garages or workshops, where it’s tough thin-walled steel or aluminum construction can take a beating. It’s often used to retrofit new electrical outlets, switches, and other devices onto existing walls. It’s especially useful on concrete or block walls, and in other situations where obstructions don’t allow wiring to run in the walls.

In my friend’s garage, the wiring is typical of residential homes—nonmetallic sheathed cable hidden behind drywall. While there are no obstructions, using EMT meant I didn’t have to open up the walls (or patch the drywall afterward), and it’ll be easy to run additional electrical devices off of it in the future.

Before bending any conduit, install all your electrical boxes—both the new boxes and the extension rings on the existing boxes that you’re going to tap. All measurements will reference off these.

When deciding where to put new boxes, envision how the conduit is going to get there from existing boxes. It’s best to avoid putting new boxes in places that require lots of bends. The electrical code only allows 360° worth of bends between “pull points.” Pull points are openings in the conduit system that you can pull wires through (see photos, PF below). It’s possible to add pull points to allow for more bends, but this adds time, complexity, and cost.
If you’re working on a finished stud wall, it’s helpful to locate the boxes directly over the studs for easy attachment. When going into drywall between studs, hollow wall anchors are the only option. I like to use Snaptoggles because they hold strong and are easier to use than standard toggle bolts.

To mark the layout, I put painter’s tape where boxes and bends will go. Then I can draw various measurements, level and plumb lines, and fastener locations on the tape without marring the wall. If I want to move something, it’s easy to remove the tape and start over.

Think about future needs when doing the layout. If your boxes have a lot of knockouts (the metal discs that pop out to allow wires to run in and out), choose the one that will make future additions easier. For example, if your conduit run is going down and to the right, use the knockout on the bottom right.

Before adding extensions to existing boxes, make sure the circuits are off, and test all devices in the box before you open it up.

Often, the easiest and fastest way to achieve a change in direction in conduit is to bend it. For consistently good results, get accurate measurements and use simple formulas to calculate where to mark and bend the conduit (a couple are provided here; others are easily found online or in bender instructions).

Manual EMT benders come in different sizes for different diameters of conduit up to 1-1⁄4 in., and are the standard tool of the trade. Manual benders all have marks for various angles and to align conduit for bends. Each size bender has a different bending radius that is taken into account when making bends. The “take-up”—the number of inches a 90° bend (called a “stub”) will account for in the overall distance from a box to a bend location—is usually marked on the bender.

For example, with 1/2-in.-dia. EMT, the take-up is 5 in. So, if there are 20 vertical inches from the box to the bend location, there are just 15 in. of conduit running perfectly vertically; the other 5 in. are taken up in the bend.

By code, all bends must have an even radius with no kinks. The relatively large radii of EMT benders helps prevent kinking, but proper technique is also important. Always keep pressure on the conduit as close to the bender as possible for good results.

I like to use a portable bandsaw to cut EMT because it makes quick work of the conduit without binding, but a reciprocating saw with a sharp metal-cutting blade works too, as does a good old hacksaw. When using a hacksaw or reciprocating saw, secure the conduit in a vise first. Regardless of the tool, always be sure to cut the conduit square.

Even if done with sharp blades, cutting EMT leaves burrs, which can nick wire insulation. To remove burrs, I use a reamer that hits all of the conduit edges at once, but files and other tools also work. However you deburr, carefully check the edges with your finger to make sure they’re smooth.

When fitting conduit to boxes, the conduit should bottom out in the fittings and lay flat against the wall without putting pressure on it. If you have to fight it, something’s not right. Assuming the lengths are correct, tweaking bends and checking the boxes for plumb can often get things where they need to be. If you try to force a length of conduit into position, it’ll fight the straps as long as it’s on the wall or ceiling. Eventually, it could spring loose. Straps are required every 10 ft. or less, and within 3 ft. of any box or enclosure. For a neat look, try to space the straps evenly.

Different numbers and sizes of wires are allowed in different sizes of conduit (see “Running Wire,” above). It’s possible to run solid wire with conduit, but I typically use stranded wire because it’s easier to pull it through, especially on long runs and runs with lots of bends. On
short runs with minimal bends, it’s usually possible to push the wires through. On longer runs, use a fish tape—a flexible line that can be pushed through the conduit and pulled back with the wires attached to it. Whether fishing or pushing, run all of your wires at the same time to keep them from hanging up.

When attaching your switches, outlets, or other devices to surface-mounted boxes, remove the device’s ears and screws first and then mount the device to the cover plate, which includes its own set of hardware for easy attachment.

Please click here to check out the four-part video series that accompanies this article. 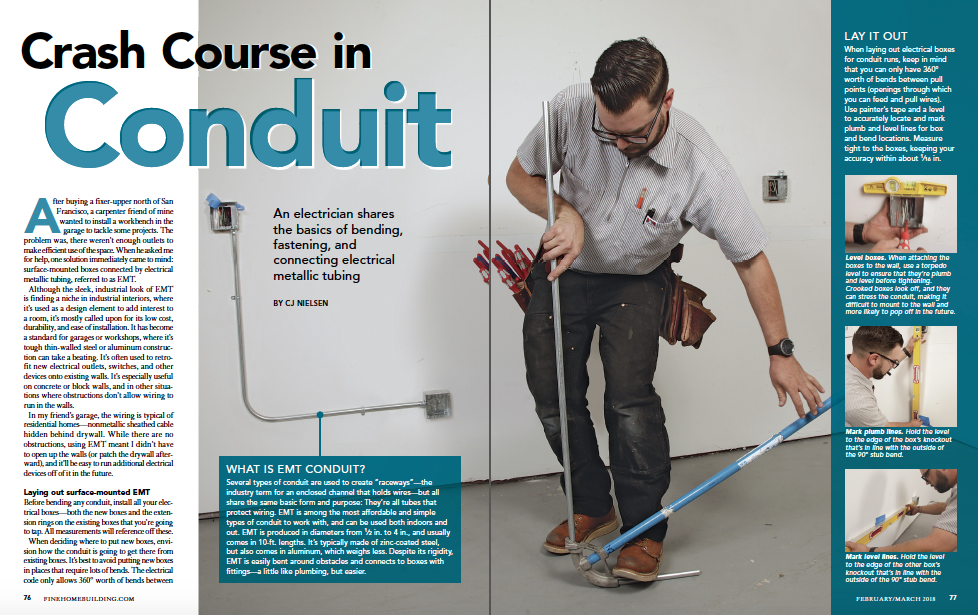 For more photos and information, as detailed in the pages of Fine Homebuilding magazine #273, click the View PDF button below.