With common-sense wiring and the right hardware, you can replace an existing light fixture with a breeze in almost any room in the house.

By Clifford A. Popejoy Issue 177

Synopsis: A ceiling fan improves a room’s climate and its overall appearance, and the units are fairly easy to install — all good reasons why retrofits are so popular. Written by an electrical contractor, this article discusses the important aspects of a ceiling-fan retrofit: namely, using fan-rated outlet boxes and checking the existing wiring, as well as other installation tips.

A ceiling fan is a great way to improve your comfort at home, and one of the most common retrofit projects is one that replaces an existing ceiling light with a fan that includes a light. Ceiling fans are easier than ever to assemble and install; in fact, I recently walked a friend through the process in an afternoon. Easy or not, there are a couple of important safety issues to keep in mind: avoiding electrical shock and getting the fan solidly attached to the ceiling framing.

Before you do anything, find out if the circuit has the capacity to run the new fixture. Most fan/light fixtures use two to three times more power than a standard light fixture. If the circuit was close to capacity before, you don’t want to overload it.

Map out the circuit to determine what’s on it. The easiest way is to turn off that particular circuit breaker and see what else no longer works. Add up the wattage of the lights and appliances that are fed by the circuit; be sure to include things that may not be used all the time, such as space heaters. If the total wattage is more than 1800w for a 15-amp circuit or more than 2400w for a 20-amp circuit, the circuit definitely is over loaded. Although not required by code, it’s advisable to keep the load below 80% of those figures. 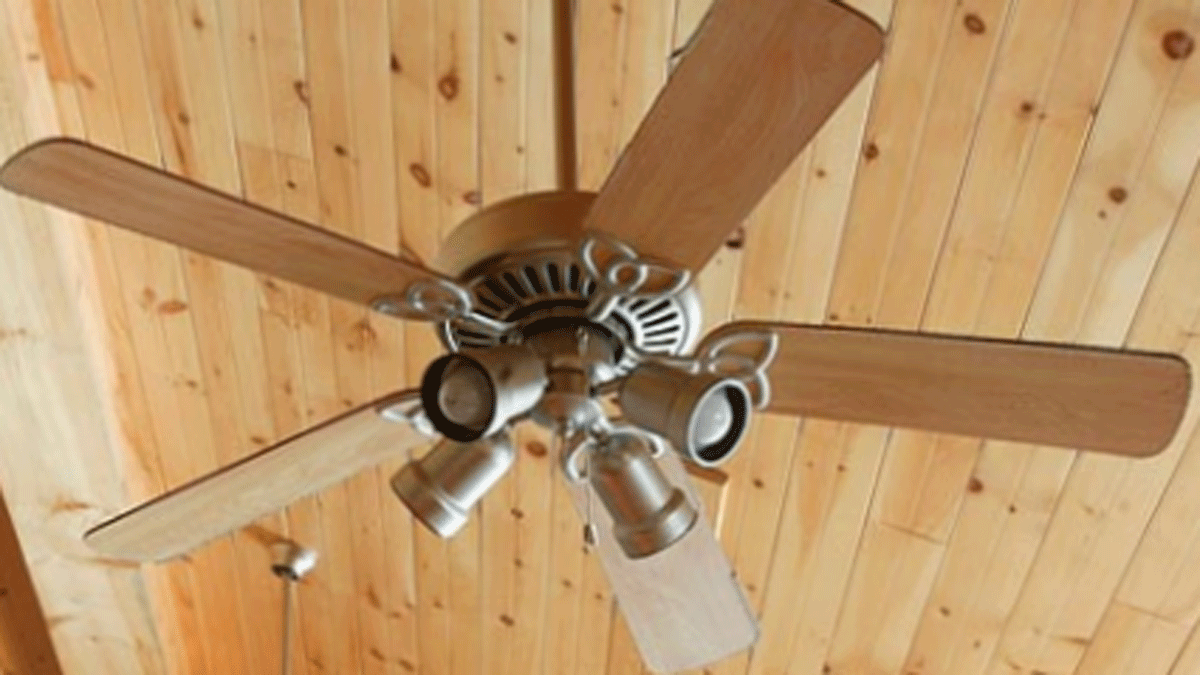 Remove the old box, and check the existing wires

Just shutting off the existing light at the wall switch doesn’t guarantee that power is off in the ceiling box. The ceiling light’s circuit should be turned off at the service panel. Use a voltage tester to confirm that the fixture and all the wires in the box are de-energized, and make sure they’ll stay that way while you’re working on them.

Now take a close look at the cables coming into the box; take notes on how they’re connected. Sometimes it’s helpful to label the wires with masking tape and a felt-tip pen. If the old ceiling box is a ½-in.-deep pancake style box, removing it is usually just a matter of pulling some nails or a couple of screws. For a side-nailed box, I’ve found that the best removal tool to use is a hacksaw blade in a holder, or a reciprocating saw outfitted with a thin, short blade to cut the nails. Be careful that you don’t chew up the wiring as you cut.

After removing the box, check the wires. If the insulation on the wires is old and deteriorated, use electrical tape or heat-shrink tubing (available in most electronics-supply stores) to insulate them. If the insulation is too cracked and you have access from above, cut back the old wires, install a splice (or junction) box, and run new cables to the fan-box location. If the wiring is armored (BX) cable, make sure the metal jacket is in good condition; if it’s rusty or corroded, install a junction box and run new cable. 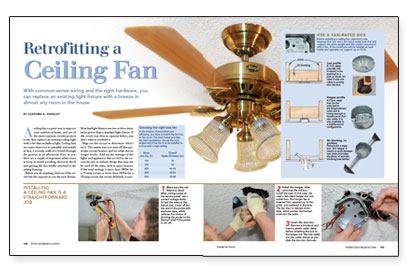