Understand why having a grounding path in every electrical circuit is essential to keeping you and your house safe.

Because electricity moves in a circuit, it will return to its source unless the path is interrupted. The return path in a typical house electrical circuit is through the white neutral wires that bring current back to the main panel. Ground wires provide an alternative low-resistance path should any of the electrical equipment or enclosures become inadvertently energized.

Why is having a grounding path important? Before equipment-grounding conductors (popularly called ground wires) were widespread, people could be electrocuted when they came in contact with voltage that, due to a fault like a loose wire, unintentionally energized the metal casing of a tool or an electrical appliance. Ground wires bond all electrical devices and potentially current-carrying metal surfaces. This bonding creates a path with such low impedance (resistance) that fault currents flow along it, quickly tripping breakers or fuses and interrupting power. Contrary to popular misconceptions, the human body usually has a relatively high impedance (compared with copper wire); if electricity is offered a path with very low resistance—the equipment grounding conductor—it will take the low-resistance path back to the panel, trip the breaker, and cut off the power. 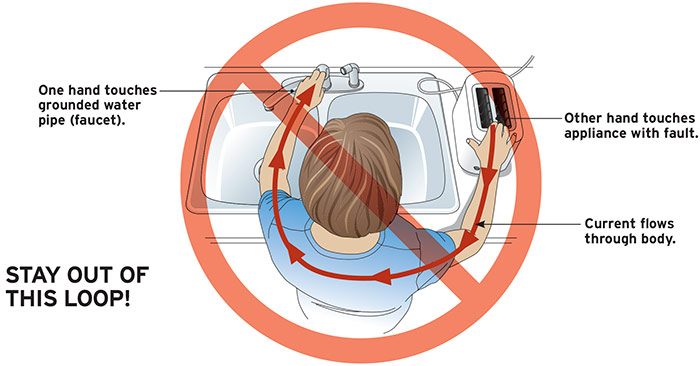 Current flowing unintentionally to ground (“earth”) is called a ground fault. The ground wire is intended to be a low-impedance path to ground, to safely carry the current of a ground fault until the circuit breaker trips. You, however, can also be a path to ground should you come in contact with an energized conductor. In this case, you would become part of the circuit, with current flowing through you. So be careful: Only a little current flowing through your heart can kill you.

Ground wires (equipment grounding conductors) connect to every part of the electrical system that could possibly become energized—metal boxes, receptacles, switches, fixtures—and, through three-pronged plugs, the metallic covers and frames of tools and appliances. The conductors, usually bare copper or green insulated wire, create an effective path back to the main service panel in case the equipment becomes energized. That allows fault current to flow, tripping the breaker.

In the service panel, the ground wires attach to a neutral/ground bus bar, which is bonded to the metal panel housing via a main bonding jumper. If there’s a ground fault in the house, the main bonding jumper ensures the current can be safely directed to the ground—away from the house and the people inside. It is probably the single most important connection in the entire electrical system.

The National Electrical Code (NEC) requires grounding electrode conductor size to be based on the sizes and types of conductors in the service. Typically, residential GECs are size 6 American wire gauge (6AWG) copper. Ground rods are typically 1⁄2-in. or 5⁄8-in. copper-clad steel rods at least 8 ft. long. The Ufer or concrete-encased electrode is the preferred grounding electrode and must be used if new concrete footings are poured. 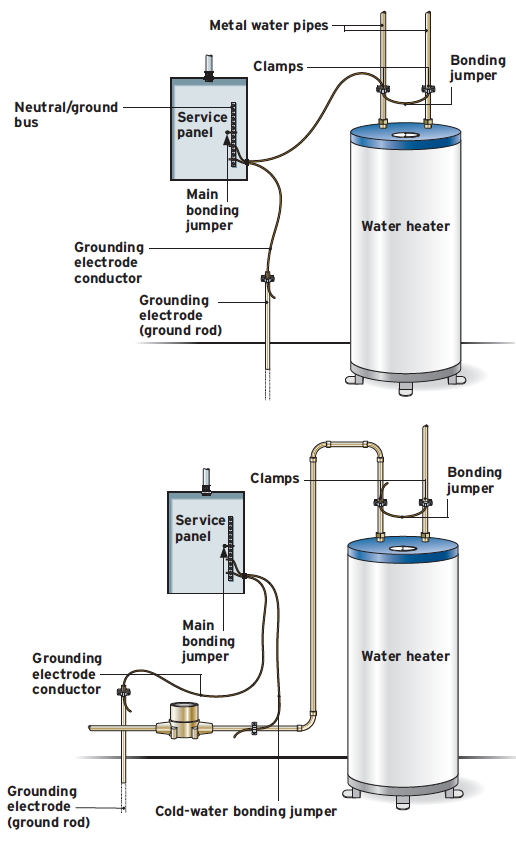 The equipment-grounding system acts as an expressway for stray current. By bonding conductors or potential conductors, the system provides a low-impedance path for fault currents. In a ground fault, the abnormally high amperage (current flow) that results trips a breaker or blows a fuse, disconnecting power to the circuit.

Further, recent code updates require that all new GFCIs have three important features. First, they must be self-diagnostic, with an LED indicator light that will flash or glow red to indicate device failure. Second, should the GFCI fail, it must be self-locking: Current will cease to flow, so that the device must be replaced. Third, GFCIs installed less than 5-1/2 ft. above floor level must be tamper-proof, with plastic shutters that slide across terminal slots to prevent, say, a child from inserting something into a slot.

X
X
Previous: Service Panels Next: Why Do I Have To Separate Grounds and Neutrals?